Ricardo Arroyo and Maria Esdale Farrell emerged as the two frontrunners of the District 5 city council race after Tuesday’s preliminary election as Arroyo edged out Farrell by around 400 votes to claim a plurality at roughly 30 percent. Two other candidates, Jean-Claude Sanon and Mimi E. Turchinetz, followed with about 15 and 14 percent of the vote, respectively.

Arroyo, a public defender from Hyde Park with a family history on the city council, would become the third in his family after his father and brother--Felix D. Arroyo and Felix G. Arroyo--to represent the city in such a capacity.

Arroyo called the victory “historic.” He would be the first person of color to represent District 5 — which includes Mattapan and Hyde Park and parts of Roslindale— on the council.

Reacting to the relatively low voter turnout on the night--11.17 percent citywide--Arroyo said the victory in spite of low vote totals vindicated the hard work of his campaign.

On hand to applaud Arroyo’s victory was Suffolk County DA Rachael Rollins, who said that Arroyo had been the “brain child behind a lot of the things I’ve proposed as your district attorney.”

“I don’t endorse many people and haven’t,” Rollins said. “[Arroyo] was a no brainer.” 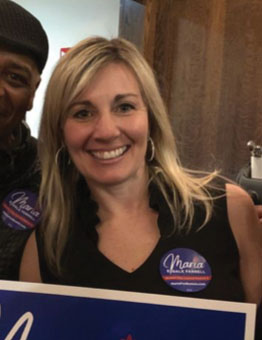 Farrell enjoys the support of current District 5 City Councillor Tim McCarthy and his predecessor, former Councillor Rob Consalvo. She has also won endorsements from a number of city-based unions, including IBEW Local 103. In a statement to the Reporter, Farrell alluded to the potential to have a city council run mostly by women representatives:

"I'm honored to have this opportunity should I be elected to this seat. I will join the other women trailblazers who serve now and who have served in the past. It's an exciting time for the city of Boston. Our district is growing, and I look forward to sharing my vision of inclusion and representation for all over these next six weeks. I want to thank everyone who supported me so far along this journey, and look forward to earning the support of many more. Let's make history with a majority of women serving on the Boston city council!"

Arroyo and Farrell will face off with the District 5 seat on the line in the general election on November 5.

In District 7, which includes parts of Dorchester and Roxbury, incumbent Councillor Kim Janey cruised past two challengers — Roy Owens and Valerie Hope Rust with nearly 70 percent of the vote. Janey will face Owens— a perennial candidate for office— in November.