Youth with developmental and physical disabilities can now enjoy the full benefits of playing soccer at McConnell Park, thanks to the Martin Richard Challenger Soccer program, organized through the Boys & Girls Clubs of Dorchester. Story, Page 4. Yukun Zhang photo

The soccer game in McConnell Park on a warm autumn Sunday morning was laid-back and slow-paced. The field was small—around 100 feet on each end—and the players young—aged 12 or older.

One player was being pushed around on a wheelchair. A few other young people formed a line along one side of the field and cheered the players on.

The friendly game was the last activity of the Martin Richard Challenger Soccer Program, in which youths with developmental and physical disabilities aged 5 and up can learn and enjoy soccer with teen members from the Boys & Girls Clubs of Dorchester (BGCD) and volunteer coaches.

The program, organized by the Martin W. Richard Foundation and BGCD, pairs children and teens with disabilities with teen buddies from the community to play baseball, basketball, soccer, and swim.

The soccer program runs from 10 to 12 on Sunday mornings. Players aged 5 to 11 play in the first hour, and older players engage in more challenging drills in the second hour. The buddies assist and play along with the athletes.

Mary Kinsella, BGCD’s vice president of education, said the athletes have different disabilities and the field may look disorganized, but the activities are individualized.

Dianne Lescinskas, the former director of inclusion of BGCD, added that the mission of the program is inclusion, to make sure that people with different abilities all have access to athletics.

Lescinskas has been involved in the Challenger initiative from its start. Her 22-year-old daughter, who is autistic, still plays baseball and basketball and manages the table with flyers and tee-shirts for soccer sessions.

Lescinskas said the mentorship and friendship between a player and a buddy persist even after the player has been taught about the skills of sports.

“I was at the supermarket with my daughter, and we saw one of the buddies who has been assisting her playing, and they say ‘hi’ to each other. Maybe that wouldn’t have happened before. As a parent, it means a lot to us.” 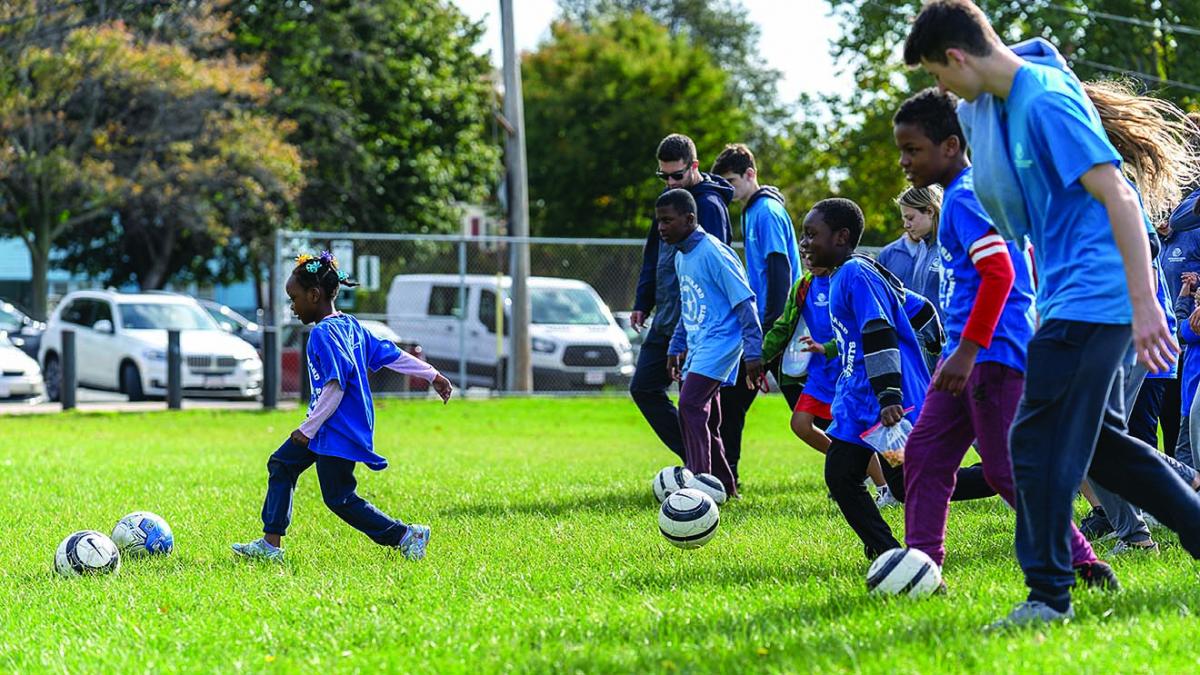 Each year, the program grows in size as the organizers learn from experiences, Lescinskas said.

Yvonne Nelson’s 11-year-old son, an autistic child with ADHD and sensory issues, has been participating in Challenger activities for at least five years. The Dorchester resident said her son has improved in socializing with other people.

“I’ve seen him grow, and not just him, but so many other kids in the program… The kids with disabilities come in, and by the time they get to certain age, you see them progress and do things they never did before.”

Nelson said what she really loves about the program is that “no one gets turned away from this, no matter what the ability level is.

Linda Freeman, whose 21-year-old son has been in the program for more than five years, shares the feeling. She said the program lets everyone play. “You have someone who uses a wheelchair. Let them play. No matter what their physical imperfection is, it’s a perfect imperfection for this.”
“If you take a look at them,” said Freeman, looking at the field, “they look at each other as players… They don’t care about race, color, gender. Nothing.”

Said Paulette Henry, a mother from Jamaica Plain: “They may not be typical kids, but they are doing typical activities with other kids.”

Participating in the program is a learning experience for the buddies, too. “You have kids from the community who come out every single Sunday to support these kids,” said Lescinskas. “And for them, they are learning about disability. They have more of a “can do” attitude. I believe their perception of disability has changed. They see these athletes as capable of playing soccer.”