Mayor Martin Walsh and the family of the late Gareth Kinkead, Jr.— including his wife Annie Kinkead— reacted to the unveiling of a new sign at the football field in Almont Park, which was named in his memory on Sunday. John Wilcox/Mayor’s Office photo

Last Sunday, the Mattapan Patriots played the Hyde Park Cowboys on the pristine AstroTurf field at Almont Park. Around noon, between games, city and state officials, led by Mayor Martin J. Walsh, joined the players on the field alongside civic leaders to re-dedicate the field in the name of the late Gareth P. Kinkead, Jr., the longtime leader of a nearby civic group who championed the park and fought successfully to get it improved.

In their red, white, and blue uniforms Pop Warner cheerleaders and football players lined up behind the mayor for the ceremony. Kinkead’s family, including his widow Annie, were on hand to help unveil the new sign bearing her late husband’s name.

“It is all about the kids behind us,” said Walsh. “The true heroes, our hero Mr. Kinkead, who this field is being named after, those are the people who do the work, day in and day out. We have to continue to remember the incredible people who built our communities.”

In the years before his death in 2013, Kinkead was a pivotal advocate for Almont Park, working closely with former City Councillor Rob Consalvo and the late Boston Mayor Tom Menino to plan out a renovation. The Menino administration kicked off the work, which ended up costing over $4.7 million. (An earlier version of this story put the figure at $3.5 million. It was, in fact $4.7 million in total over about seven years, per city officials.)

Kinkead had a straightforward goal for the facility: He wanted to create one of the best safe spaces in the country for his community, place where people could gather to play games, garden, or just enjoy the outdoors.

“Gareth is shining down with this beautiful weather,” said state Rep. Dan Cullinane. “Every Sunday when the Patriots are playing, to see this field come alive is a tribute to his memory.” 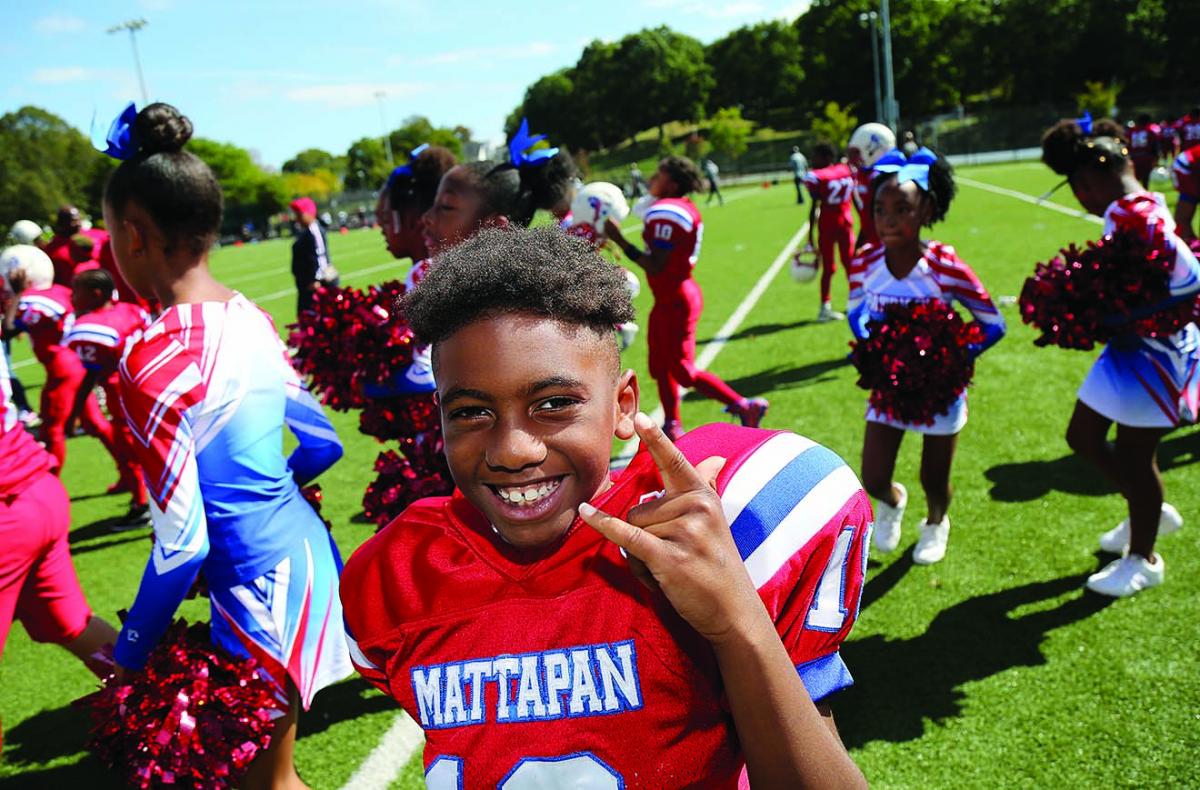 A member of the Mattapan Patriots Pop Warner team enjoyed the day at the new Kinkead Field in Mattapan. John Wilcox photo/Mayor’s Office

The Mattapan team started practicing at Almont Park in 2002. It was a vastly different place then, according to Walter Apperwhite, a Pop Warner coach and organizer.

“This part of the field, nobody came to. We used to say it was geese crap and mud and us,” he said Apperwhite.

He added,“Our kids cleaned the field, and today is a special day because Mr. Kinkead was a tireless champion for Almont Park.”

“This used to be a dust bowl,” said Mattapan resident Barbara Crichlow, remembering her children playing football years ago. “The games weren’t even played here the field was so bad.”

Gareth Kinkead: He dreamed of 'Shangri-La'

With the upgrades, the park is being used more than ever. Earl Faulk, who has carried on Kinkead’s work as a sort of unofficial ambassador for the park, is determined to maintain and improve what his friend and neighbor started. He wants to see a pavilion built, and a few more call boxes.

When Gareth and Annie Kinkead first moved their family into the neighborhood there was a great deal of crime and people didn’t know each other well. So they held cookouts in their backyard and invited all the neighbors for some interaction. Remnants of that effort linger in the Colorado Street Citizen’s Group that meets on the second Tuesday of each month.

Kinkead was a computer technician in the Navy who served in the Pacific Theater during World War II. He installed the first-generation computer systems, his wife said, adding that he was always working to improve his environment, wherever he was.

“My husband was a true activist for over fifty years,” said Annie Kinkead. “He saw something that needed to be changed and did something about it.”

His vision was to create what he called “Shangri-La” in Mattapan. He worked with neighbors to build gardens in the park, in part due to his belief that somebody gardening from early in the morning to late at night in Almont Park might help disrupt any potential trouble.