Governor Charlie Baker and Secretary of Health and Human Services Marylou Sudders visited Harvard Street Neighborhood Health Center on Tuesday morning to outline the vision for the administration’s new comprehensive health care legislation. The bill, which Baker introduced in October and will be voted upon at a hearing at the state house on January 28, represents a “departure from the status quo,” said Baker, addressing a room filled with doctors, nurses, elected officials, and health care professionals.

“We have a system that has for decades been built on transactional medicine and technology,” said Baker, who explained that the bill will instead put “significant new resources” toward primary care and behavioral health care services, which focus on a preventative, more holistic approach compared to a current system that “undervalues time-based therapy.”

Prioritizing primary care and behavioral health services is one of the key elements of the bill, which stipulates that payers and providers must increase their expenditures on primary care and behavioral health by 30 percent over three years. The legislation also calls for managing health care cost drivers in the interest of consumers, improving the scope of practice standards for nurse practitioners, and stabilizing distressed community hospitals and health centers. 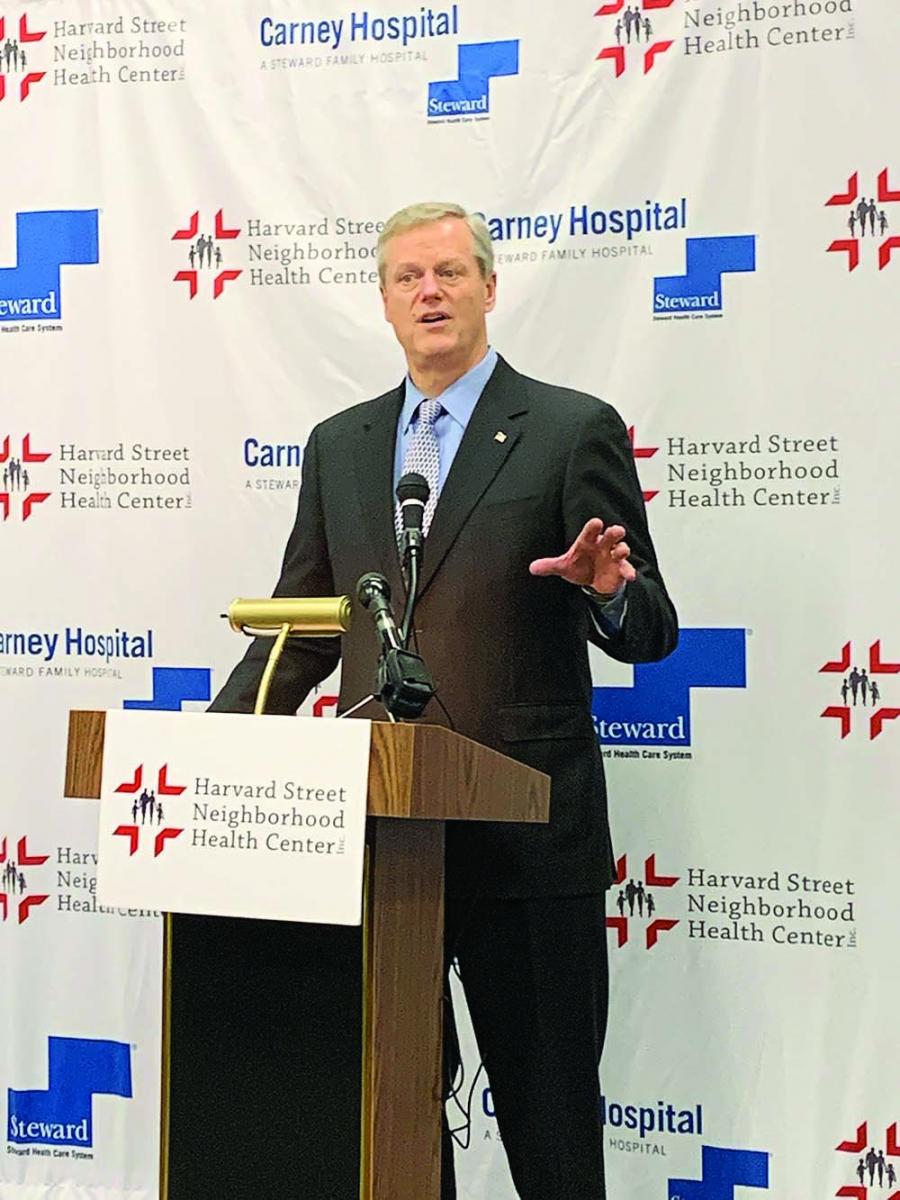 “The reason the governor and I wanted to be here at Harvard Street as we start the campaign to discuss the 179 page health care bill the governor has filed is because health centers, to us, actually embody what we are attempting to do through legislation--at the heart of a community health center is primary care,” she said.

Stan McLaren, CEO of Harvard Street Neighborhood Health Center, thanked Baker and Sudders for their proposed investments, which he said will help ease the heavy financial strain under which the center operates “on very low margins.” He also emphasized the vital role health centers play in improving community health:

“As a result of keeping patients engaged in primary care and less reliant on expensive emergency hospital and specialty care visits, Massachusetts health centers have generated annual savings of $2 billion for the Commonwealth--that’s huge. Harvard Street Neighborhood Health Center alone generates $9 million in savings to the health care system, while providing a $13 million economic boost to the surrounding community. So we not only increase access to care for a vulnerable population, we decrease the cost of care and increase the economic wellbeing of the community we serve.”

The health center is in the process of developing plans to expand their Blue Hill Avenue facility into a renovated mixed-use building with health care services and affordable housing.