The L Street Center in its current state.

The Curley Community Center in South Boston – known to many as the L Street Bathhouse – will likely close for up to 18 months beginning as soon as next fall as the 80-year-old beachfront property undergoes a $15 million renovation designed to modernize and protect the well-used facility.

That was the message from city officials to center members and community residents at a public meeting on Monday evening.

More than 200 people packed into one of the center’s larger rooms to hear a presentation from officials with the Boston Centers for Youth and Families (BCYF) and the Public Facilities Department, which will oversee the project.

Patrick Brophy, the city of Boston’s chief of operations, led off the meeting with an effort to ease anxieties about the center’s future. “There’s been a lot of rumors, a lot of innuendoes… We are not building condos on top of L Street,” he said. “What’s going to happen here is going to be the nicest community center in all of Massachusetts.”

Brophy and other officials frequently reminded the standing-room-only crowd that this was the first meeting in a design process that will stretch into 2020. No decisions have been set in stone. Regarding the exterior, attendees were told, the city is planning on restoring it without changing any of the classical aspects of the facade.

Members raised concerns ranging from the duration of a construction shutdown, what it will mean for programming, and whether the budgeted $15 million will be enough to do the job.

Officials offered ballpark answers on how long the design process will likely take before construction can begin—about a year— and provided a projected range of how long construction will take: an estimated 12-18 months.

Throughout the meeting, every administrator in the room could be seen with a pen in hand noting what residents were asking for—from more saunas to ensuring that women members retain their locker rooms.

Brophy noted that the renovations are intended to target “inefficiencies” in how the current building works and what programming is available. In addition, he noted there is the matter of protecting the bathhouse from rising sea levels, increased flooding risk, and other climate change-related issues.

“We think that some of the work that has been done here over the course of time has been lipstick, more moderate facelifts,” said Brophy. “What we’re looking to do is preserve this facility for the next generation of kids who are going to be here, and for everyone in between.”

BCYF Director Will Morales said that the renovations will be “a triple-bypass” rather than a facelift, the intent being to completely modernize the interior of the facility. To illustrate his point, Morales asked how many members in the room had been a part of the L Street community for over 30 to 50 years, and a majority of attendees raised their hands. The city’s vision for the center’s future is to create a facility that earns the same type of loyalty from future members that the L has engendered from its current membership, he said.

Architects with DesignLab who will be working on the project laid out goals that will inform their work, including added safety and security. Improving the views outside with new windows, updating fixtures and equipment, and making the building compliant with accessibility regulations are all on their checklist. 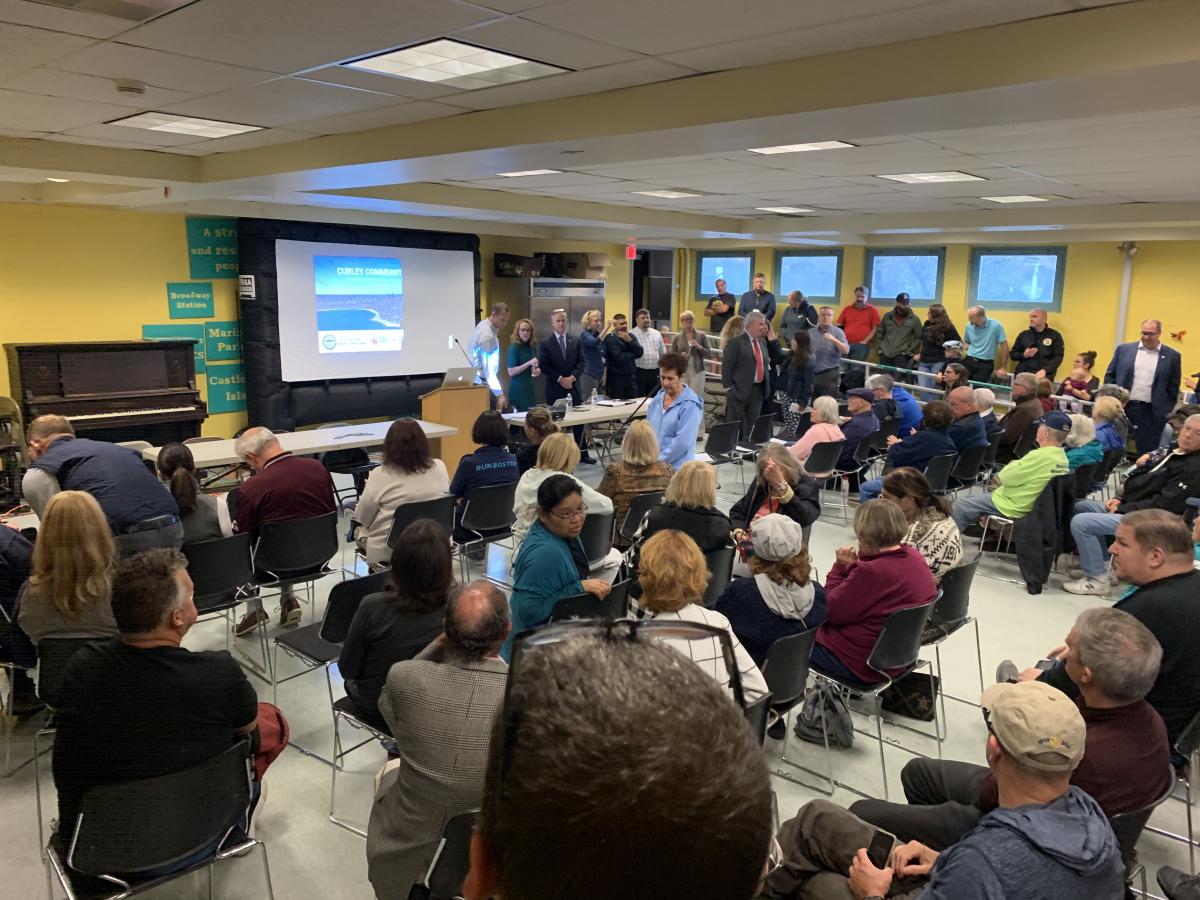 City Councillors Michael Flaherty and Ed Flynn addressed the audience, both vowing to keep fighting for more funding from the city for the project.

Congressman Stephen Lynch, a longtime member at L Street, commended Andrea Flaherty’s leadership not just as an administrator of the center but also as an advocate for female members. He also assured seniors whose social lives revolve around the rhythms of programming at L street that officials would be paying particular attention to ensure senior programming continues.

Flaherty emphasized this during her comments, assuring attendees that one of her top programming priorities was making sure activities such as senior lunches will continue at nearby facilities.

Officials would not comment on whether membership fees would rise, but noted that dues are not being used to pay off the renovation.

Brophy said that the city will make sure all Curley Center employees remain employed during the construction period. He confirmed that there will be a design committee made up of L Street members who will have input on the project design. No timeline was provided regarding when that committee will be formed or when the next public meeting will be held.

Among others who addressed the meeting were Sam Batchelor and Kelly Ard Haigh, architects at DesignLab, and Scott Dupre, the project manager for the L Street renovations.