Skip to main content
Caleb Nelson, Special to the Reporter

Great music never dies. It spreads organically, gets remixed, and continues to find fresh ears. Daniel Laurent (DL) speaks gently, is careful with his words, and carries many scars. His strength, creative energy, and resolve is palpable in his lyrics. It shows through his music and he knows how to make outsiders care about his family.

“It’s important to be legacy building,” DL said in an interview after the premiere of his award-winning music video. “How do you want to be remembered?”

The week after Memorial Day, after a great flood of rain, as city blocks begin heating up all over the northern hemisphere, Laurent released his heartfelt single, “Outside.” Now live on YouTube, and available on his website (DanielLaurent.com), the song speaks to the perils of life’s hustle.

Over a bass-heavy doo wop beat, Mattapan resident DL raps a challenge for his peers: “Sink or swim, it might hurt your pride.” At 37 years old, he says he is not trying to cater to teenagers, but to be a model of how to live through adulthood. “Stand firm on my principles. Violate one of the three, the wrath’s gonna be Biblical.”

With his song playing in the background, DL talked about his lyrics: “Meaning if you step on my shoes, that’s fine. You don’t say sorry, that means you’re disrespectful, but I’m not going to take your life away for that. But violating my family, I take that very serious.”

It has been more than ten years since DL lost his fiancée to gun violence. Before the music video, he showed a short documentary that he and Jeffrey Palmer made to commemorate his experiences. It shows him visiting her grave for the first time in many years at the cemetery near Franklin Park.

Her death still haunts him, and he still doesn’t clearly remember everything that happened after he heard the news. The video also commemorates many other victims of gun violence, including Kendric Price, who was a basketball coach at UMass Boston, the California rapper Nipsey Hustle, and DL’s neighbor Eleanor Maloney, who died from gunfire in the spring.

“I actually saw her body on the ground,” he said. “It was covered, but I saw her feet. All of that is traumatic. We push that aside and keep going, but it’s really traumatic.”

The room was packed for the premiere. Many prominent members of the Mattapan community attended, including City Councillor Andrea Campbell. About 60 people gathered in The River Church, located in the basement of a bank in Quincy Center.

Dominic and Christina Kaiser ran a film festival called “Stories by The River” with a channel on YouTube. “Any time we can engage the community, we’re open to give opportunity,” said Dominic.

Many of DL’s friends from the Boston Rap world were there, including the DJ Jeff 2x who has produced for artists like Nas and Mobb Deep.

“I believe in his music, and what he’s got going on,” DJ Jeff 2x said. “He speaks volumes, very well respected, likable, lovable guy. You can see everybody came out to see what’s going on.” 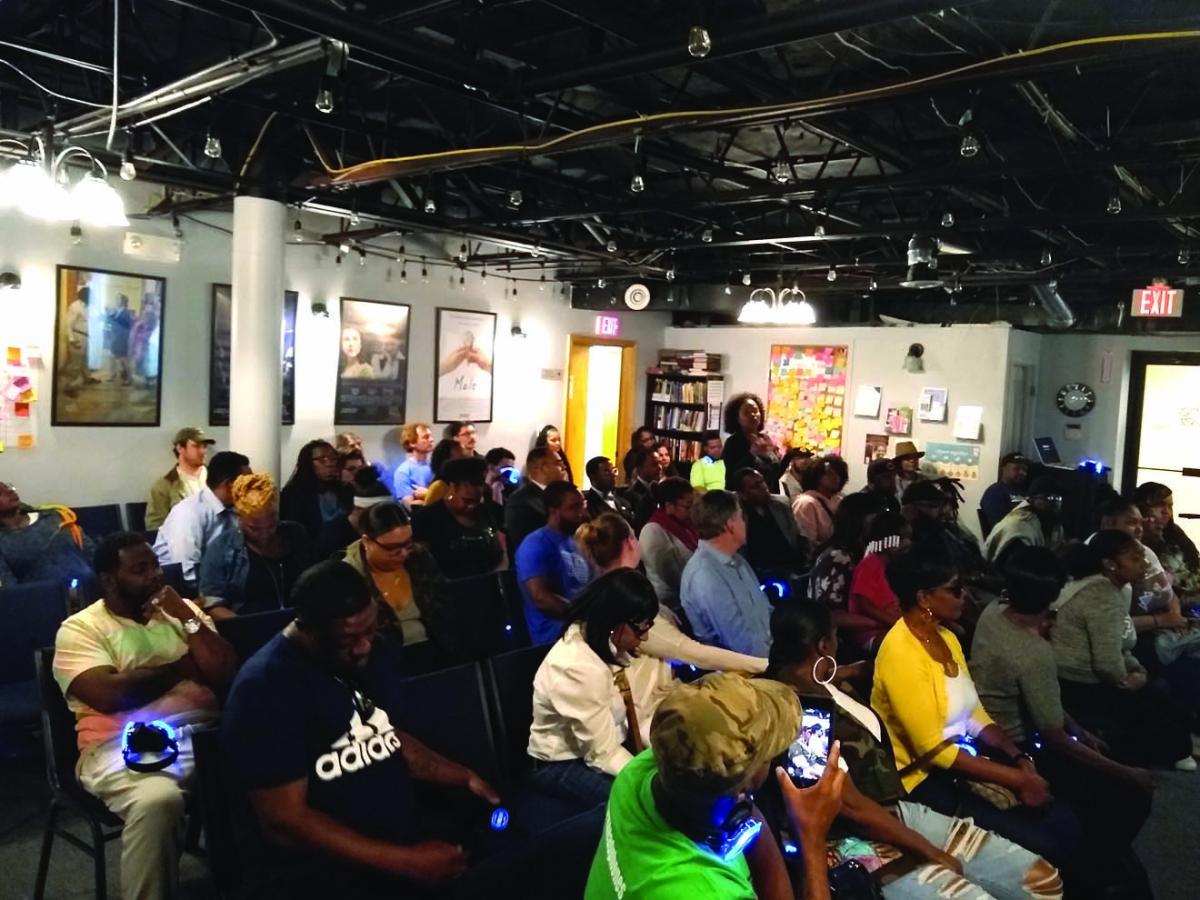 About 60 people gathered last month in The River Church, located in the basement of a bank in Quincy Center, for a listening party for Daniel Laurent’s new single, “Outside.” Caleb Nelson photo

Rocklyn, a friend of DL’s who heard the song about a month before the video release, said he has his verse ready for the remix. “He’s always been a phenomenal artist,” said Rocklyn. “It’s a deep song. It’s a message that brings awareness to some of the challenges within the inner city. It focuses on some of the solutions as well.”

Nerissa Williams Scott, a producer with TCGT Entertainment who has seen DL perform many times, noted that he has been influential in her hip hop life: “When he spits his lyrics, he’s a true gift from God. He’s an artist. Every time a hear a good album, I call him up, I’m like, ‘D, I heard this album.’ He’s like, ‘You’re late, but it’s great.’”

While some members of DL’s community see opportunities for activism in his lyrics, the rapper says that’s not his bag. “There are people in this room that I know actually voted for Trump, and that’s fine. I love them the same.”

DL said that he has been MCing on and off for about ten years. “It’s always been a passion for me, but this time I’m more intentional. I’m trying to be intentional with my message, but I’m not trying to disrespect someone for their beliefs or their thoughts, or their stances. It’s blatantly there, and you see it. But I don’t want an “F you” and your thoughts.”

Music Video Director Jeffrey Palmer sent it out for awards, and it won “Best Music Video” from the American Tracks Music Awards. While appreciative of the attention, DL said he doesn’t need more clout. He hopes to make real positive changes in his community. “Trying to save some of these kids is important,” he said. “If I could personally know that I saved one, I would be fulfilled.”