As the sun pierced through the murky sky and began to dry up the dampened Seaport dock last Saturday morning, Dorchester natives Dianne Lescinskas, Kristine Hoag, and Patrick Doherty, the “MR8” logo on their clothing and caps, were off and running.

With the Boston Marathon just ten days away, the members of Team MR8, which represents the Martin Richard Foundation, were on their final training runs around the Seaport, beginning and ending at the blossoming Martin’s Park, the new waterfront facility memorializing his life and death that is on track to open in June.

Of the 84 runners on Team MR8 this year, 13 are from Dorchester.

“We have a lot of repeating runners from Dorchester,” said Bill Richard, who launched the foundation with his wife Denise and Martin’s siblings, Henry and Jane, in the wake of the tragedy at the end of the 2013 Marathon where Martin lost his life to a terrorist’s bomb. “We have people who have been running for us for the last five or six years. They help bring the entire running group together for us, helping them along the way, teaching them about the city and what we do as a foundation.”

Lescinskas, who said her brother originally challenged her to run the race, is a third-time Team MR8 runner. She said she loves what the Martin Richard Foundation represents — inclusion, kindness, sportsmanship, and peace.

“We want to be in Team MR8 because, growing up in Dorchester, that’s what it’s all about: people always thinking about each other,” she said.

Doherty has been running with Team MR8 member since 2014, the year the foundation was established. Hoag is running her second Boston race, but this year is her first time running for MR8. She said that running for the foundation is more meaningful. “I’m learning a lot, and I get to communicate a message to people who don’t know the foundation, and run.”

She added, “A lot of people that I know who don’t live in Dorchester ask me what I’m running for, and I say MR8 and they say: What’s that? And if I say the Martin Richard Foundation, it starts to sink in. But I don’t think they really know all the wonderful things the Foundation is doing with the city and nationwide.”

Community organizations say the foundation is an ally in their shared values. 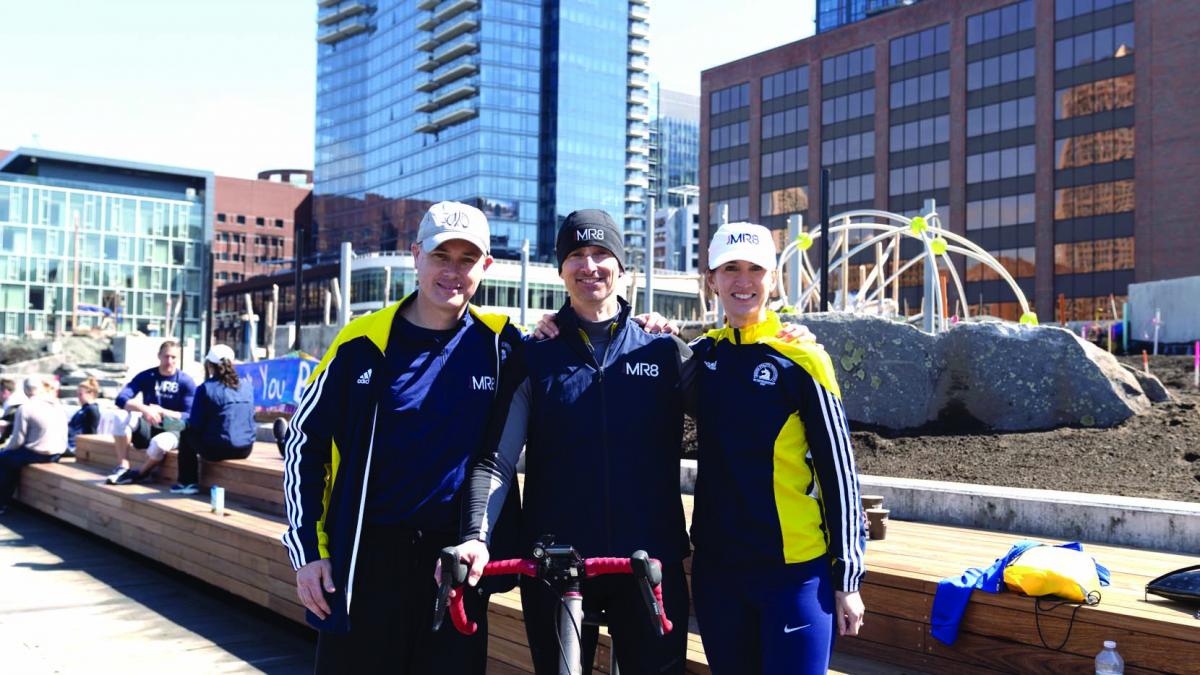 Mark Culliton, founder and CEO of College Bound Dorchester, an organization that helps at-risk youths in getting college education, said the foundation is a great supporter and generous in donating.

“They are of, for, and by the community. It’s homegrown and they are deeply connected to the issues that concern our city,” said Culliton. “That personal connection is felt in every bit of the work that they do.”

Rachel Rodrigues, executive director of Louis D. Brown Peace Institute, said the Richard family and the foundation recognize the disparity in how victims of violence are seen and supported, and they elevate the institute’s mission in supporting family and community impacted by murder and loss.

The foundation also helps fund Project 351’s youth service program, said Sam Carson, the project’s director of strategy and operations. Martin Richard, he said, was honored as a local service hero, and each year, a team of eighth graders, led by alumni, dedicates its service to Martin.

Terri Ladka, the executive director of the Foundation, said that in nearly every Team MR8 application the foundation received last September, the hopeful runner was driven by the mission of the foundation, and wanted to continue promoting its values. Many past runners, Ladka said, became committed volunteers for the foundation.

“When we think about the foundation and everything it does, the ways that it gives back, it really motivates you to want to be a better person, to want to do more,” said Lescinskas, whose daughter benefited from the Challenger sports program that Team MR8 helps to fund.

On Saturday, Doherty and Hoag logged 13 miles, returning to the camp at noontime. Lescinskas retired early due to an injury, which she said would heal before Marathon Day, April 15.

During the run from Hopkinton to Boston, Lescinskas said, people’s reaction to runners wearing the Martin Richard shirts is incredible. “It pushes you through the 26.2 miles when someone screams out ‘Peace’ and ‘Do it for Martin.’”

Pat Brophy, another Dorchester native and foundation volunteer, cheered on the runners as they returned to the dock. “You guys are now forever part of the family,” she said. “Keep crushing it.”

To donate to one of the Team MR8 runners, go to TeamMR8.org.