They’ve become symbols of spring and Boston sports glories. But when Boston’s Duck boats are not on the road or on the Charles River, they spend their off-hours in a building near Fields Corner.

“In the summer, when the doors are open, people will drive by and you can see them jam on the brakes, stop, back up, look into the garage, and be like, ‘Oh my god, that’s where they are,” said Tony Cerulle, who has been director of vehicle maintenance with Boston Duck Tours for 24 years.

The large garage, home to 28 Ducks, is tucked into a corner of two narrow streets, with gates opening to an open parking lot connecting the garage to the street. The facility is staffed every day, even in off-seasons, between the weekend after Thanksgiving and the beginning of spring. 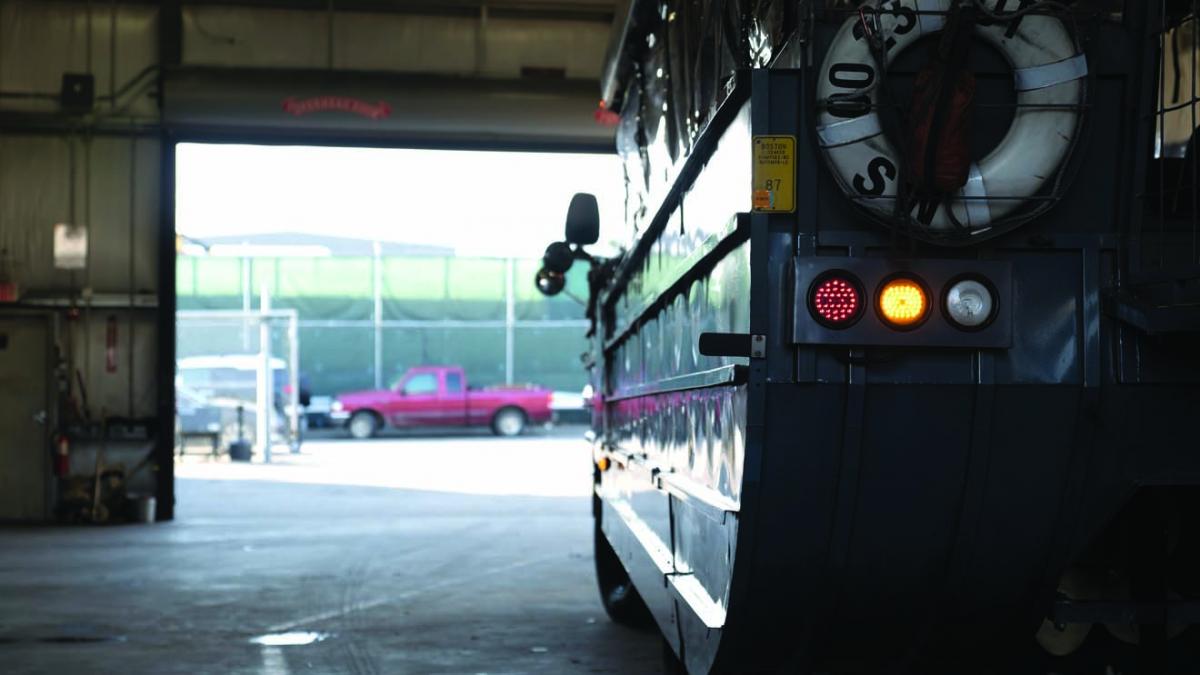 A Duck boat departs from the garage.

“Every winter, we take all the Ducks apart, and we clean all the inside parts out and replace the engines of some of them,” said Bob Schwartz, director of marketing and sales. “There are always ways to improve them. Right now, we are putting convertible roofs on all the Ducks—not all of them have them yet. We installed cameras and sensors several years ago for safety concerns.”

It’s still early in the season, and not all the ducks are in operation. Some are still being worked on, Schwartz said.

Deep inside the garage, beyond the rows of Ducks, are shelves and cases of mechanical tools and parts. A Spider-Man poster, an old one from the Sam Raimi era, hangs high up above the aisle leading to more tools and workspace.

On the first morning of the 2019 season for Boston Duck Tours, Alex Lopez, a mechanic on the morning shift, moved between the Ducks and the workspace, tinkering with the boats and searching for parts and tools. 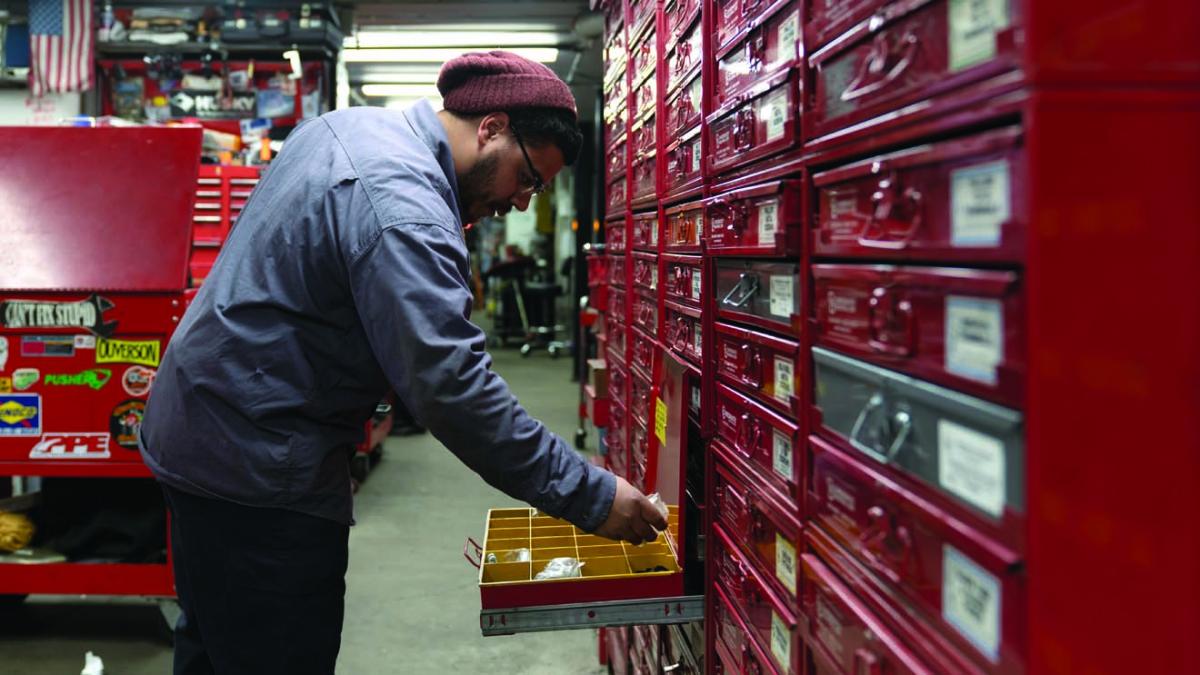 Alex Lopez, a mechanic, looks for a tool from the drawers in the garage.

Bill O’Connell, the operations manager, said the morning staff arrive as early as 4 or 5 o’clock, and the latest shift could run into midnight. The Ducks would be out between 8 a.m. and an hour before sunset. 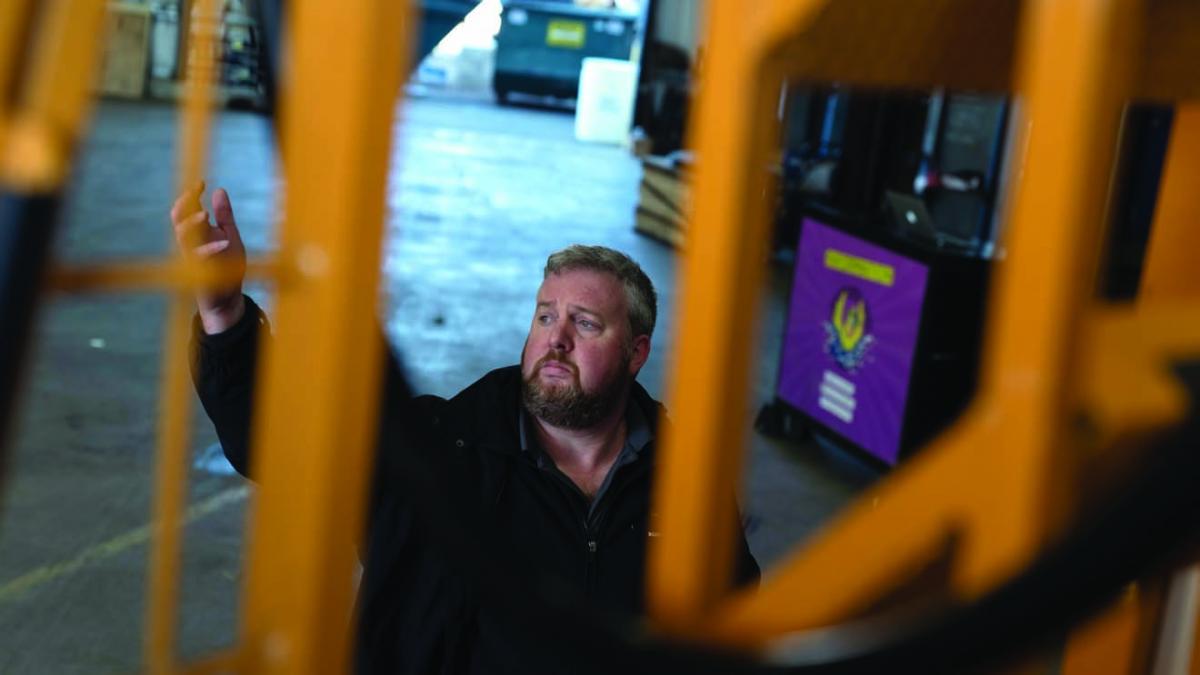 Bill O’Connell, the operations manager, signals a driver in the garage.

Steve Powell, a new driver still in training, inspects Ducks every morning, sliding beneath the vehicles on a creeper and examining the tires from the side before climbing into the vehicle. “We look for anything that looks broken or leaking—there are certain plugs that we have to make sure that are attached so we don’t take on water—tire pressure, all the safety equipment, life jackets, all the lights, horns, mirrors. Everything.”

A former truck driver from Oregon, Powell said a former employee told him it was a good job —“better schedule, less dangerous”— and he expects to have fun. 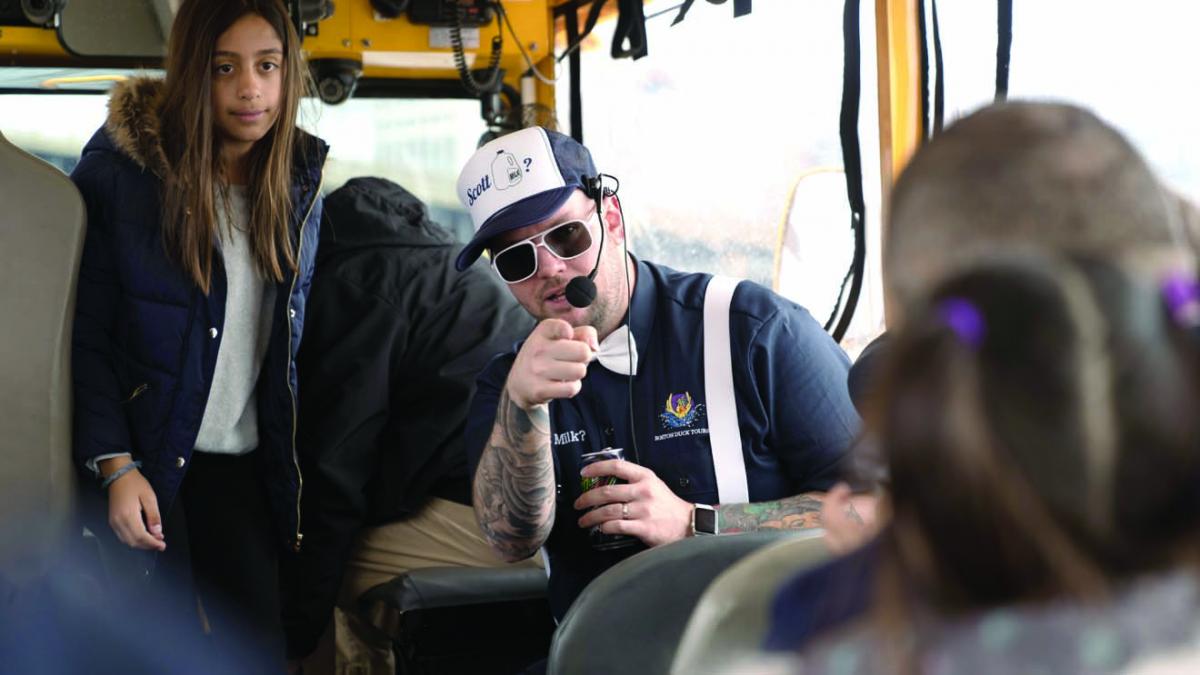 Joe Rodin, who narrates the tour under the nickname Scott Milk, invites tourists to drive the Duck while the vehicle is on water.

As to the garage itself, Cerulle said people often ask him where they house the Ducks, and when he tells them in Fields Corner, Dorchester, it’s sometimes a letdown. “I think they think we do it on the water like in a shipyard. We used to. Way back.”

The company once rented a shipyard in East Boston, but the business outgrew the space. “We wanted something closer to the Prudential Center area, we wanted more space, and instead of renting, we wanted to own it,” Cerulle said. “Dorchester seemed to have at the time—this was 1998-ish—the best opportunities, the best prices, and the largest pieces of land.”

He added that the company wanted to find a building where the Ducks could be driven in and out from two sides, so the current location was turned down at first. But as the search stretched to almost a year, the company settled on the original site, even though the Ducks have to be backed into it. The building cost around $650,000, and another $1.2 million was spent on revamping it. The Ducks moved in around 2000, when the garage could only hold eight Ducks, Cerulle said.

A time of rest in the Fields Corner garage.

After that, an addition was built in front of the original building. In 2006, the company replaced the World War II Ducks with newer ones, and five years ago, another piece of building was added, Cerulle said.

Seeing the empty Ducks swimming in the morning or afternoon traffic of Dorchester can be a sort of surreal experience. “People do get excited when they see the ducks drive by,” said Matt Frank, executive director of Fields Corner Main Street, a neighborhood organization. 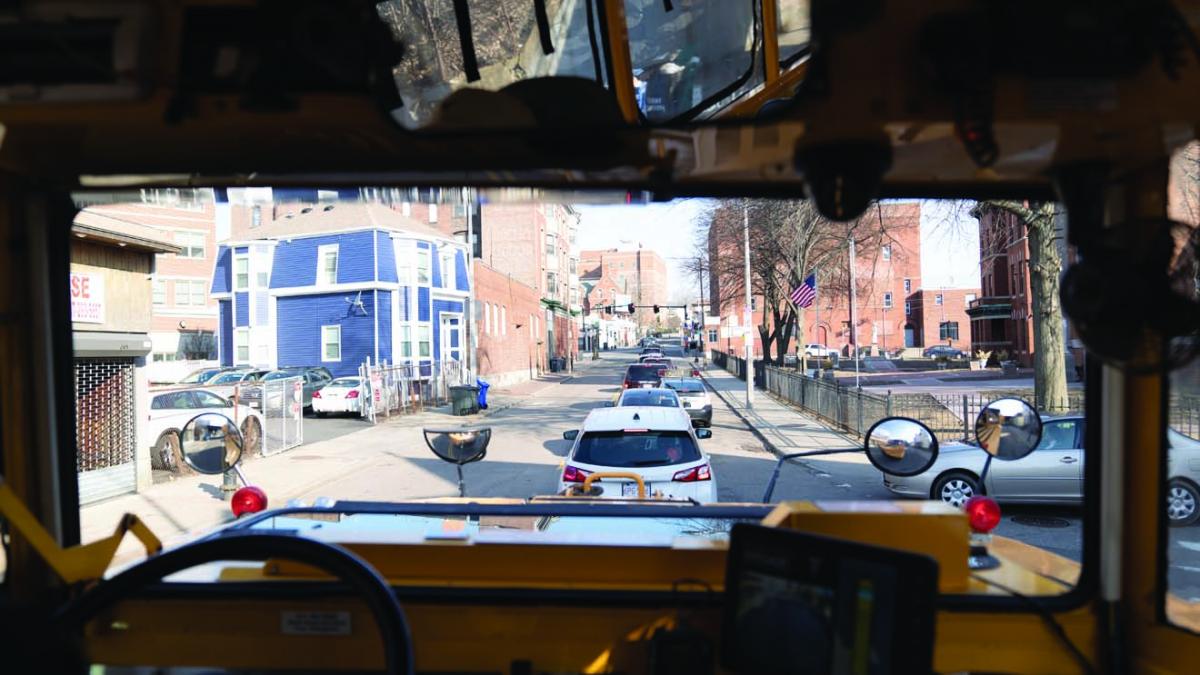 Dorchester morning traffic as seen from the window of a Duck boat en route to Prudential Center.

Frank said that last November, his organization teamed up with Boston Duck Tours for their annual fundraiser, dubbed Ducktini instead of the usual Dotini. A Duck was parked at the venue, a photo booth was set up in front of it, and people who attended the events took selfies with the vehicle.

“We have a very good relationship with them, and we plan to do more with them,” Frank said.

Once in a while, when groups depart from Dorchester to go on a tour, the Duck rides would begin in Dorchester. Cerulle recalled Kit Clark Senior Center and Dorchester Little League as groups that received the pickups. 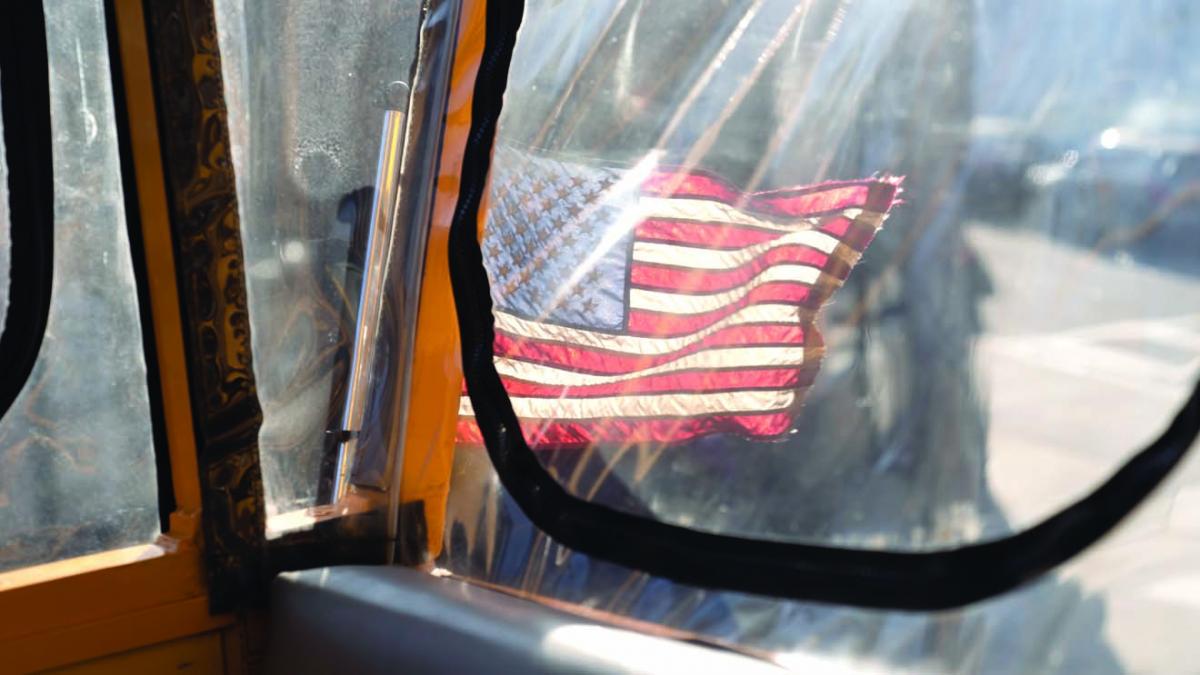 The view from a window of a Duck boat.

Two weeks ago, on March 22, the first day of the Duck Tour season, the half-hour ride on “Symphony Hal,” a bright yellow Duck, from the Fields Corner garage to Prudential Center was bumpy and silent except for the clanging of metal parts. The speed meter indicated a speed of a little over 20 mph.

“We don’t drive this fast during the tour,” said the driver, Kulbir Samra, a native of India.

All photos by Yukun Zhang.