A virtual meet-and-greet hosted last night by 12th Suffolk District candidate Stephanie Everett was interrupted twice and finally ended when a man hacked into the Zoom system, shared pornographic video of a naked man performing sexual acts, all while dropping expletives and racial slurs— including the “N-word.”

Everett, one of three candidates running for the state representative seat, confirmed the incident in an interview with the Reporter on Thursday morning. A version of the video is posted on Everett’s campaign Facebook account, although the segments including the unidentified nude man— who was white— have been edited out. 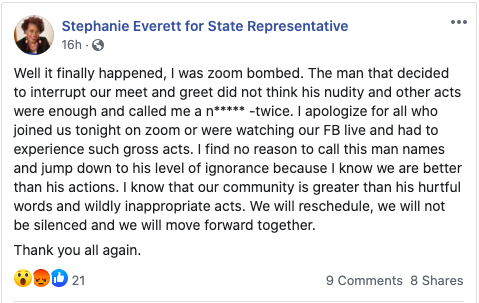 Everett said the man appeared on the screen early into the meeting, surprising and shocking everyone on the call.

“It was very weird because it sounded like it was someone agreeing, he said ‘yeah’ and I didn’t know who it was and then he popped up,” said Everett. “It was a man laying in a bed, a very heavy set man, performing his own sexual acts and he just started using the ‘N’ word and other expletives.”

Each person that joined the virtual meet and greet was required to register before the event through Zoom, but Everett’s team could not pinpoint the man’s name. Apparently, he had hacked into the host system.

“People were being let in because they were registered and we didn’t know who it was. It started with one name, and we were trying to figure out who it was. We couldn’t determine who it was because their system was sophisticated enough that it kept bouncing to different names,” she said.

Donovan Birch Jr., a supporter of Everett and member of the Democratic State Committee, witnessed the incidents. He explained that the man speaking hid his face behind a pornographic video.

“They registered for the event in the midst of it while it was happening, and came in and were able to hack the host system and take over the screen sharing and audio capabilities,” he said.

After tweeting about the incident Thursday morning, Birch said in a phone call with the Reporter that the unidentified man actually projected the pornographic video while hacking Zoom’s screen sharing feature. 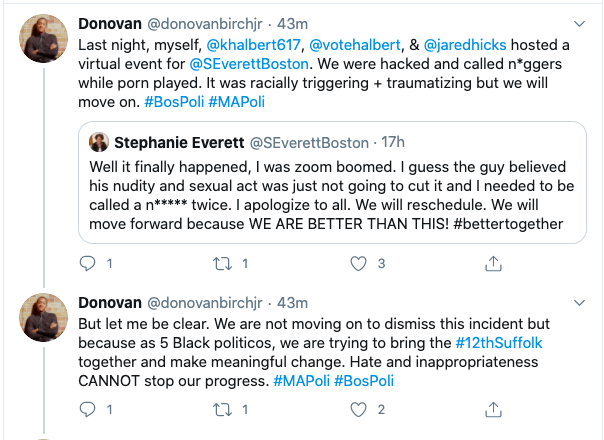 Terry Dolan, Ward 17 Democratic committee member and supporter of Everett, was also watching on Wednesday night. She described what she saw as a "profoundly disturbing" display.

"It was about 20 or 30 minutes into what I think was going to be an hour long call. My memory as to exactly what she [Everett] was talking about in the moment had taken a backseat, but as she was talking suddenly the image changed in one of the blocks," Dolan told the Reporter.

Dolan said she wasn't quite able to discern whether it was only one individual speaking over a video recording, but her instinct was that the video recording was separate from the audio.

"It could have been the same person [speaking] but my impression was that there was some individual speaking separately from the video or playing a separate recording."

Added Dolan: "I'm sitting back and thinking that we all think we’ve moved ahead, you know, and then to see this very base awful display was just profoundly disturbing."

After the first outburst, everyone on the Zoom hung up, and then reentered the meeting. Dolan said there were roughly 25 people on the call before it was ended, and only about 10 who re-entered.

“We came back in, and as we’re waiting for everyone to get back in, he’s back in again. And he was doing the same thing,” said Everett.

Everett and her team then decided to end the virtual session. She later issued a statement about the incidents on Facebook.

“We just couldn’t, we didn’t do it a third time, it just wasn’t worth it. But I felt like I needed to make a statement on Facebook mainly because I was struggling with trying to deal with it, my husband was asking me what was going on and I just couldn’t say it last night,” she said.

Everett explained that the attack felt very personal to her.

“The first time he did it when I was right in the middle of talking, so it seemed very personal. Every time it felt very personal to me. And every person on the call, regardless of race, they were just completely offended that this language was coming out of someone’s mouth,” she said.

Birch called the incident ‘unfortunate’ and said that the man tried to silence Everett with bigotry.

“It's unfortunate that this happened especially because Stephanie is an incredibly accomplished woman who has overcome so much adversity,” he said.

“It is unfortunate that someone tried to silence her with bigotry. In the midst of Black Lives Matter when there’s this racial tension she’s saying that we are better than this and someone literally tried to take that away from her.”

He added: “Bigotry has no place in the commonwealth, in our politics, and it certainly should not be tolerated and executed in this moment of COVID-19 and BLM and at a time when we should all be coming together.”

“Kristen, Jared, Dave, and I wanted to take a moment to apologize for the Zoom Bomb that occurred during our virtual meet and greet for Stephanie Everett,” the statement reads.

“Please know, this was not something that occurred in error by the campaign or host committee, the Zoom was hacked. However, we know that we are #bettertogether and we must push on because the issues we face are more important and deserve our attention. We also know that Stephanie is the best candidate for this race and her passion and commitment to this community cannot be derailed.”

Former 12th Suffolk candidate Cam Charbonnier, who left the race last month and has since endorsed Everett’s candidacy, called to offer his advice.

“Cam reached out last night and offered some nice words. He said he heard that there were some terrible, ignorant people in the world and not to let it bring me down and keep doing what I’m doing.”

“It’s still hard to talk about it, I just can’t believe that I had to experience it,” said Everett. “But we’re not slowing down. We’re not going backwards to where this is going to be tolerated.”