Skip to main content
Suzanne Ouellette, Special to the Reporter

Three of these scholars who have been with the academy since early childhood include Ryan Meristil, Anthony Martindale and Henry Peralta.

Eighth grade graduate Ryan Meristil of Saint John Paul II Catholic Academy Lower Mills Campus has been a student at the Academy for the past ten years. Ryan’s mom immigrated from Haiti in 2003 with her parents. His mom said she wanted “Ryan to have a better education and she has made so many sacrifices over the years to keep him in Catholic School, because he is a smart young man and she wants him to achieve his dreams.” Ryan will matriculate to the John D. O’Bryant School of Mathematics and Science. He was also accepted into Xaverian Brothers High School and Saint Joseph Preparatory High School as well as several other notable schools.

He was the only middle school student in the City of Boston to receive the King Boston Award this year for his essay entitled “Eradicating the Trifecta of Injustice.” He plans to be a commercial pilot when he is older. Ryan’s grandfather passed away earlier this month due to COVID-19 and he has always been Ryan’s number one champion. Ryan plans to continue his grandfather’s legacy and honor him by working hard and achieving his hopes and dreams.

Anthony Martindale of Dorchester joined the Academy’s Neponset Campus as a kindergartner. Anthony is known for his infectious smile, sense of humor, perseverance, and integrity.   He has overcome several challenges in his life, including the tragic passing of his brother in sixth grade.

Henry Peralta of Dorchester came to St. John Paul II Catholic Academy’s Columbia Campus in Pre-K. He is the third graduate of the Academy in his family. His older siblings both attended Columbia Campus and his younger sister is currently in second grade. His youngest brother will be starting Pre-K at Columbia in the fall.

As a long-standing member of our school community, Henry has seen the campus evolve over the years. Henry has been in many clubs and sports at our school - from basketball to baking to running robotics. He is an O’Brien scholar and has shown excellent academic success and growth.

Peralta looks back fondly at his time at the Academy for teaching him the skills and knowledge he needs to succeed. Henry was accepted at St Joseph’s Prep, Cristo Rey, Boston College High School and the O’Bryant. In the fall, he will be attending St. Joseph Prep in Brighton as a member of the class of 2024.

“We are so proud of all of our graduates,” said the Academy’s Regional Director Catherine Brandley. “Our graduates have been accepted to more than one high school and received over $1.28 million in scholarships for four years of Catholic and private high school. Our graduates have won art and music awards. They have served the community with food, letters, clothing and monies for those in need. This has been a challenging time for all of us with the pandemic. Despite the obstacles, these students persevered to finish off their semesters with success. We look forward to seeing all of their future accomplishments.” 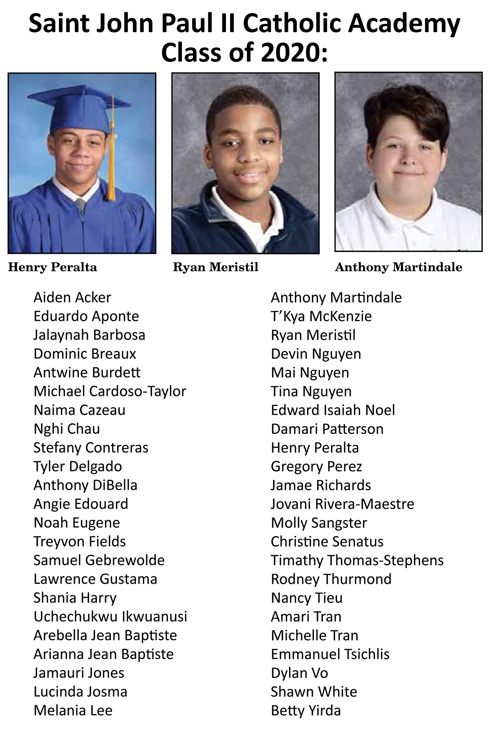