Boston police advanced south along Tremont Street toward Boylston Street on the night of May 31. Chris Van Buskirk/SHNS photo

The City of Boston delivered nearly $5.8 million in overtime pay to police in connection with shifts associated with the wave of protests in May, June and July where thousands gathered to object to police brutality and systemic racism, the News Service has learned.

The outlays, obtained in response to a public records request, show OT spiked in June when officers were paid $5.3 million for a total of 82,054 overtime hours worked. The month featured several large gatherings outside the State House and protests in Nubian Square and Franklin Park.

"There is a tremendous irony here ... which is that protests against too much and too racist policing have been turned into a huge revenue opportunity for police in Boston and elsewhere," said Boston University political science professor Spencer Piston.

The spending covers pay for additional, extended, or replacement shifts to monitor demonstrations over the three months. The $5.8 million is roughly 9.5 percent of the $60.8 million appropriated for paying overtime hours in fiscal 2020 and represents a total of 88,893 overtime hours worked over the three-month period.

Police spending has drawn significant scrutiny over the past several months and some advocates have called on the city to reallocate funding from the police to other city programs. Mayor Martin Walsh responded in early June by declaring racism a public health crisis and announcing a plan to move $12 million in police overtime spending to other programs like housing security and violence prevention.

"What is at the heart of this is people in communities of color, particularly Black communities that have been over-policed, violently policed and policed in discriminatory ways, demanding justice," said Rahsaan Hall, ACLU of Massachusetts Racial Justice Program director. "And one of the greatest indicators of a society is where it spends its money. And if people in communities are demanding justice, and our budget shows that we are spending more money in policing those demands for justice, that we're headed in the wrong direction."

Overtime spending on police in Boston, which has regularly hosted large events, has become commonplace. 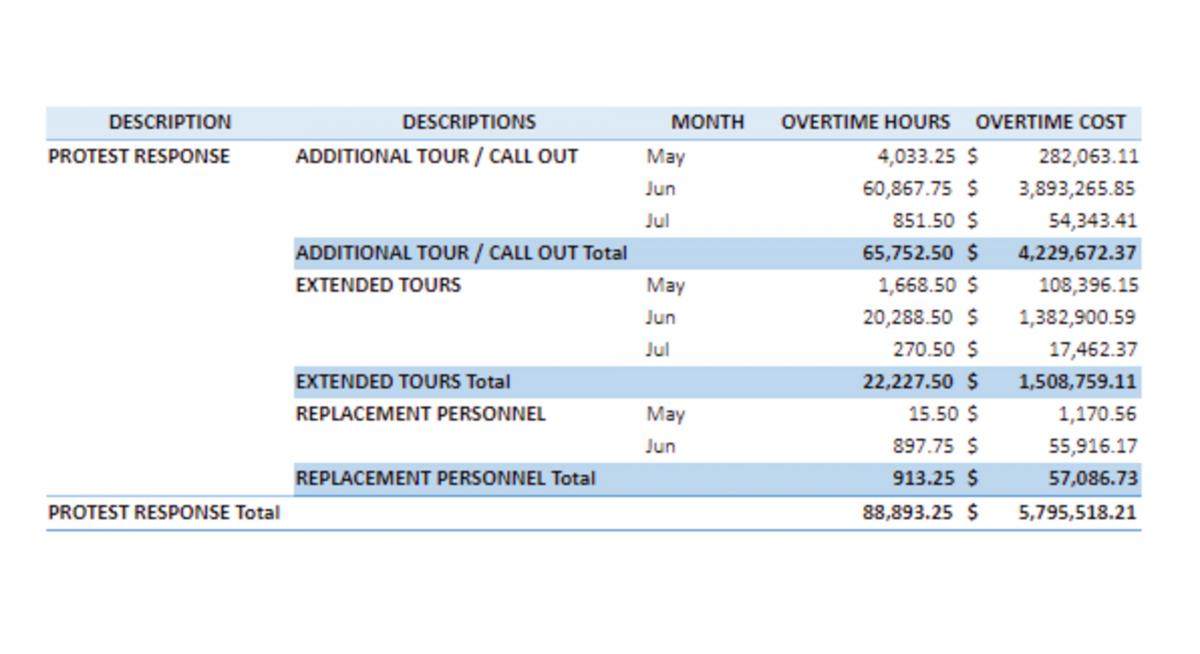 Boston police operating needs for fiscal 2019 ran just over $400 million with overtime hours costing nearly $70 million, according to city records. From fiscal 2017 to fiscal 2019, OT spending within the department has grown by almost $10 million. The department spent $54 million on overtime through March of fiscal 2020.

Police officials previously said the department works to backfill at least 94 positions a day to meet mandatory minimum staff levels, according to a Boston Globe report.

Since the 2013 Boston Marathon bombings, the department has deployed more police to large events, Sgt. Det. John Boyle, a spokesman for the BPD, said Tuesday.

Under the collective bargaining agreement between the Boston Police Patrolmen's Association and the city, if an officer is called back to their unit after already leaving for the day then they are guaranteed a minimum of four hours of overtime recall pay. As it relates to protest response for the three months, the city of Boston paid $4.2 million for additional call-outs or tours.

"We know that the estimates that the Boston Police Department makes for what it will spend on overtime are meaningless because the collective bargaining agreement requires them to pay officers," Hall said. "Then there are kind of departmental staffing levels that they bind themselves to, that require them to pay overtime to people so that they can have the appropriate staffing levels."

Countless protests occurred across the state and in Boston shortly after the death of George Floyd, a Black man who died at the knee of a Minneapolis police officer. Demonstrators often chanted "Black lives matter" and "I can't breathe," a reference to Floyd's final words, as they walked through city streets.

A peaceful protest on May 31 ended in the dusk hours and gave way to violence in downtown Boston that carried on into the early morning hours of June 1.