Early in the evening, thousands of people gathered in front of the State House to protest peacefully. Chris Van Buskirk/SHNS photo

Downtown Boston turned into a battle zone Sunday night after a peaceful protest suddenly disintegrated into a spurt of violent clashes between protestors and police, including storefront looting that Gov. Charlie Baker described just before midnight as "criminal and cowardly."

A Black Lives Matter protest started in Nubian Square at 6:30 p.m. and people marched to the State House where others had gathered. It was one of a series of demonstrations held across the country over the weekend, pushing for racial justice and protesting the death of George Floyd in Minnesota.

As the gathering began to break up after nightfall, people squared off with Boston police in Downtown Crossing and started to throw rocks and bottles. Shortly after, police deployed mace and the night plunged into chaos. "Those now protesting in the streets of Boston have surrendered the moral high ground as efforts to hurt and harm police officers continue to intensify in our city," read a statement from Boston Police on Twitter. "Men and women of BPD doing their best to restore order and keep the peace."

The National Guard was also deployed Sunday night to help quell the unrest. Boston Mayor Marty Walsh said in a statement that he wanted to thank the protestors who exercised their right to protest peacefully.

"I am angered, however, by the people who came into our city and chose to engage in acts of destruction and violence, undermining their message," Walsh said. "If we are to achieve change and if we are to lead the change, our efforts must be rooted in peace and regard for our community."

Walsh, who for more than two months has been leading city efforts to slow the spread of COVID-19, plans a noon press availability on Monday outside Boston City Hall.

Boston police arrested about 40 people and seven officers were injured during the protest, according to a statement from the police department.

Thousands had gathered on Beacon Street, packing the area near the State House steps, earlier in the day to protest the death of George Floyd, an unarmed Black man who died after a Minneapolis police officer knelt on his neck. Video of the Memorial Day incident has sparked nationwide protests from Los Angeles to New York.

Derek Chauvin, the Minneapolis officer depicted in a video of Floyd's death, was fired, along with three other officers who were on the scene. Prosecutors charged Chauvin Friday with third-degree murder and manslaughter.

Baker said in a statement that Floyd's death at the hands of police was a horrible tragedy.

"I also want to express my gratitude to all the police officers and other first responders working to protect the people of Boston the individuals whose violent actions, looting and property destruction was criminal and cowardly - and distracted from the powerful statement made today by thousands of Massachusetts residents," the statement read.

Sen. Sonia Chang-Diaz (D-Boston) watched on the earlier, peaceful protest from the front windows of Doric Hall, quietly contemplating the scene. A security officer checked her ID badge — "I work in the building," she said — and another officer walked by later to tell her that he could not vouch for the safety of anyone inside the building.

Under the Golden Dome, a surreal scene unfolded in what would normally have been empty hallways as state troopers donned protective gear and carried non-lethal compressed air guns.

After hours of rallying in front of the State House, protestors split into various groups around downtown. Clashes were widespread and at one point people began to loot the Walgreens at Washington and Essex streets. A shoe store on Washington Street was smashed open, the door ajar, a sneaker and a workboot mixed with the shattered glass on the sidewalk. 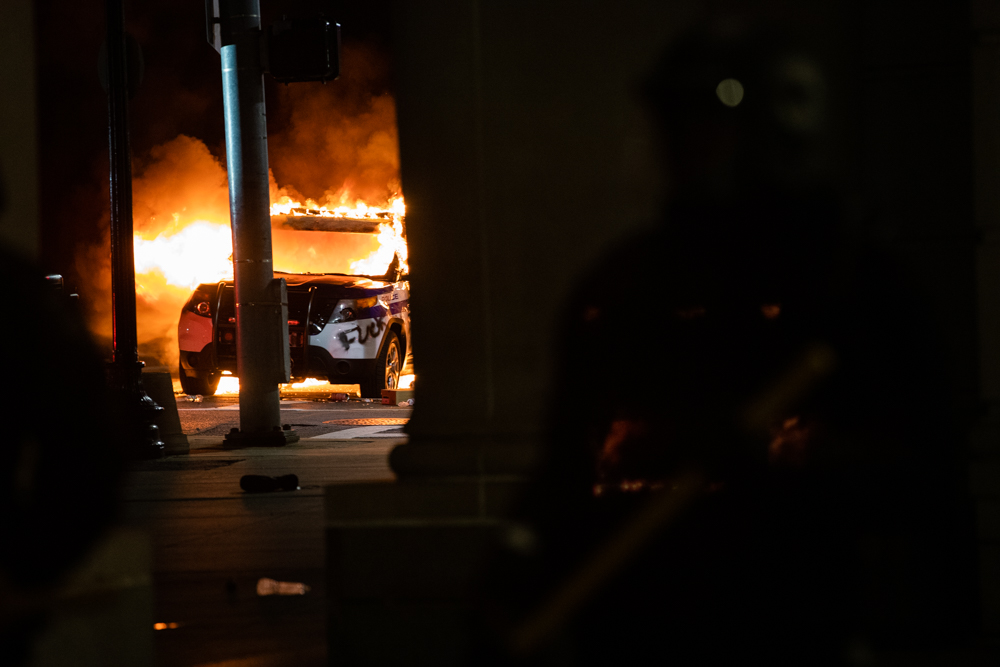 Nearby, in front of the Beantown Pub, a Boston police cruiser burned behind a line of police officers as protestors yelled "I can't breathe," a reference to Floyd's death.

Protestors threw items including rocks, bottles, bricks and at one point garbage cans and the rim of a tire at police along Tremont Street while law enforcement fought back with pepper spray. Barricades were tossed into the street to block the advancing police and one protestor smashed a Suffolk University residence hall window with a skateboard.

Earlier in the day, Rep. Dan Ryan (D-Charlestown) attended the peaceful rally with his 22-year-old son who is living back home due to the COVID-19 pandemic.

"I figured I'd walk over with him, he had a few questions, and we had a nice talk, and we'll see what's going on here, and let him make decisions for himself about what the future holds," he told the News Service.

For Ryan, the "whole thing nationally is quite a mess."

"I understand the rage and the frustration," he told the News Service. "But I also understand that Boston kind of knows how to send a message and do it the right way. And I think we have a history of doing that, and it shows it here today."

"Prayers for safety in the city of Boston tonight," he wrote. "Shame on those who are looting, burning, attacking others, and engaged in violent criminal mayhem."

Rep. Liz Miranda (D-Boston) tweeted Sunday morning, "The silence among colleagues is deafening." She added in a subsequent post: "As a Black woman I don't have the luxury to be quiet. Just because Massachusetts isn't on fire right now, doesn't mean it can't be. In fact, if we paid more attention to our marginalized communities we would know that racist policies are everywhere. I'm MA too." 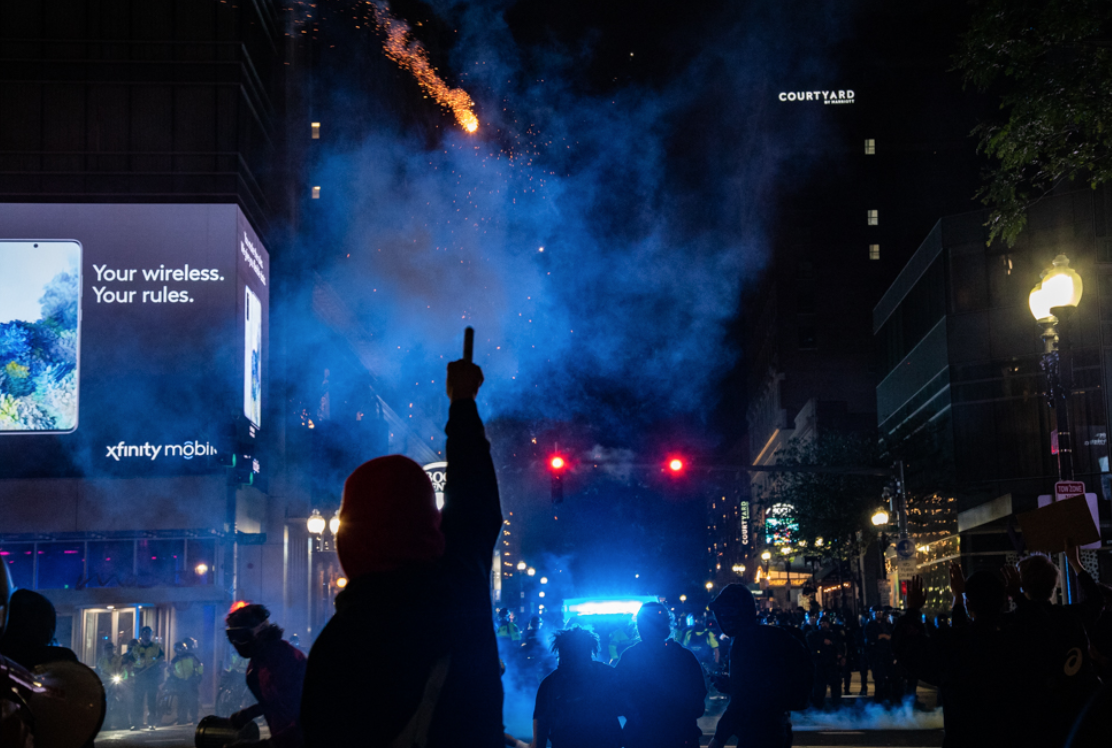 A protestor shot off a firework toward Boston police at the intersection of Tremont and Stuart streets. Chris Van Buskirk/SHNS photo

On Sunday, House Speaker Robert DeLeo tweeted: "I grieve with the family of George Floyd and members of communities who have seen heinous incidents like these remain all too frequent in our society. This was not policing. This was a crime. I'm committed to learning from these communities and amplifying my colleagues' voices."

Rep. Mike Connolly (D-Cambridge) said he chatted with Miranda earlier in the day to let her know he is ready to be an ally. Standing on Bowdoin Street during the early evening rally, he hoped that current conversations "will move into actual action."