Skip to main content
Greg Wayland, Special to the Reporter

Greg Wayland and his mother, Jo Wayland, were photographed in 1950 at Green Harbor in Marshfield, Massachusetts.

“The war overshadows all our days and our lives, but we go about doing things in the normal way in so far as possible.”

Sound familiar? It was Jan. 12, 1943; the war was with Axis powers, not COVID-19; and the words are from my late mother’s diary about living in war-time Dorchester, a handwritten record on yellowing stacks of bond paper joined by rusting staples that I uncovered in a cache of family memorabilia.

Josephine Wayland cherished her diary, begun when the family lived on Bowdoin Street and completed after a move to Neponset Avenue. “The truth is we just seem to adapt ourselves to the conditions,” she wrote.

Her account of food and fuel shortages and traffic restrictions enumerates terrors exceeding our fears of an invisible virus, including the threat of aerial bombardment. My father, an air raid warden, made sure the attic was free of flammable clutter.

“The night air raid alarms frighten the children,” Mom wrote on June 29, 1943, “and they cluster about me crying, but we make jokes and soon we all forget the weird sirens.”

Those night alarms were incomprehensible to my sister and three brothers, ages two to six (I hadn’t come along yet.) “All oblivious are they,” she wrote, “to the awful war that engulfs the earth, the obituary notices of fine young men dying every day.”
There were, in fact, signs of the war overhead. “The sky is full of the student pilots training for their ‘wings,’” Mom wrote. “Often we perceive that they are brand new recruits from the wavering of the planes.”

The Dorchester waterfront looked out on the Squantum Naval Air Station. Those trainee pilots went on to serve, and often die, in skies over Europe and the Pacific. Squantum’s hangers and runway have vanished beneath the sprawl of Marina Bay. 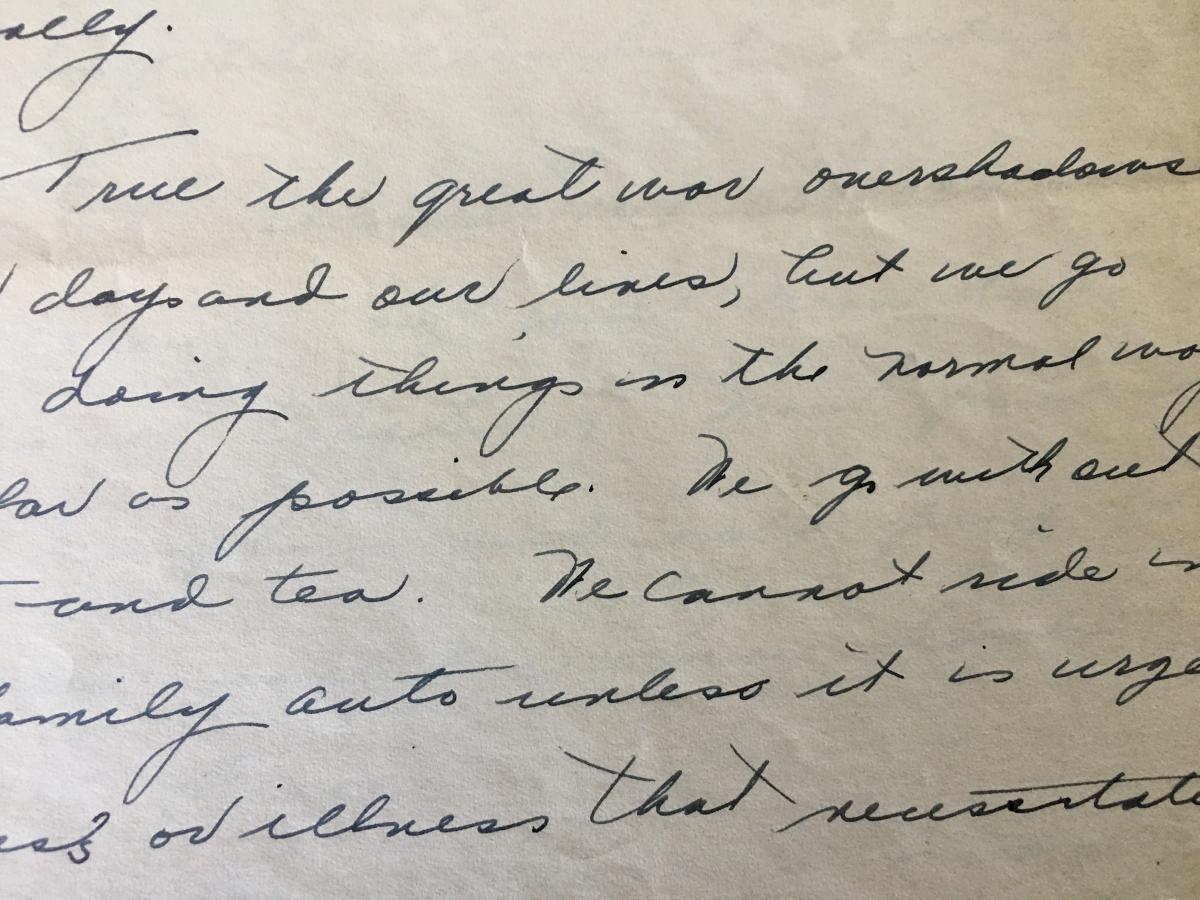 “We have received our ration cards for sugar and also for gasoline,” Mom wrote on May 18, 1942. “There are also the restrictions on metals and vital materials like rubber and silks. We go without butter and tea. The papers say roads are 90 percent empty, dealing a death blow to resort owners. We cannot ride in the family auto unless it is urgent business or illness that necessitates it. I shall be glad for the rationing because, you stand in line (for food) and before you know it, all that the storekeeper has is all given out. It’s humiliating.”

War bulletins mingled with household news. On Feb. 6, 1943, she wrote, “President Roosevelt flew to Casablanca today to meet with Prime Minister Winston Churchill” and also that “Hitler has not made a comment and there’s speculation as to where he is and what he may be doing.” Then we learn that Mom baked break and muffins and Dad bought shoes for the kids.

At Christmastime, prices were high and “all toys are either wood or pressed paper and even they are scarce.” My father, a salesman for Glendale Coal & Oil, found, according to Mom, that “people are so cruel and unkind when a shortage makes it necessary to curtail or delay their order.” She added that he welcomed rumors of coal rationing because “it’s the only way to stop the hoarders.”

As the war dragged on, Mom wrote, “Looking back on our mountainous problems, “it is fun to watch them disappear like mists before the sun.”

Let’s all keep that in mind.