A view of the newly re-opened George Wall Playground in Dorchester Park, which was completely renovated over the past year in a project that cost roughly $626,000. Photos by John Seamans/Boston Parks and Recreation

A year-long project to improve the George Wall Playground at Dorchester Park is complete and the space is now open to the public following a $626,000 renovation.

The work was funded by Mayor Walsh’s Capital Improvement Plan and Youth Lead the Change, the mayor’s participatory budget for accessible equipment that gives young people power over $1 million of the city’s capital budget.

Dorchester Park is the latest Boston Parks and Recreation Department facility to re-open this fall within current health guidelines. Other renovated spaces that opened this year are in Hyde Park, Mattapan, and South Boston.

“We are investing in parks citywide as part of Boston’s plan to provide quality green spaces for all residents and play spaces for the children of our city,” said Walsh. “Families are encouraged to follow social distancing guidelines and enjoy fresh air at the improved Dorchester Park playground before winter sets in.” 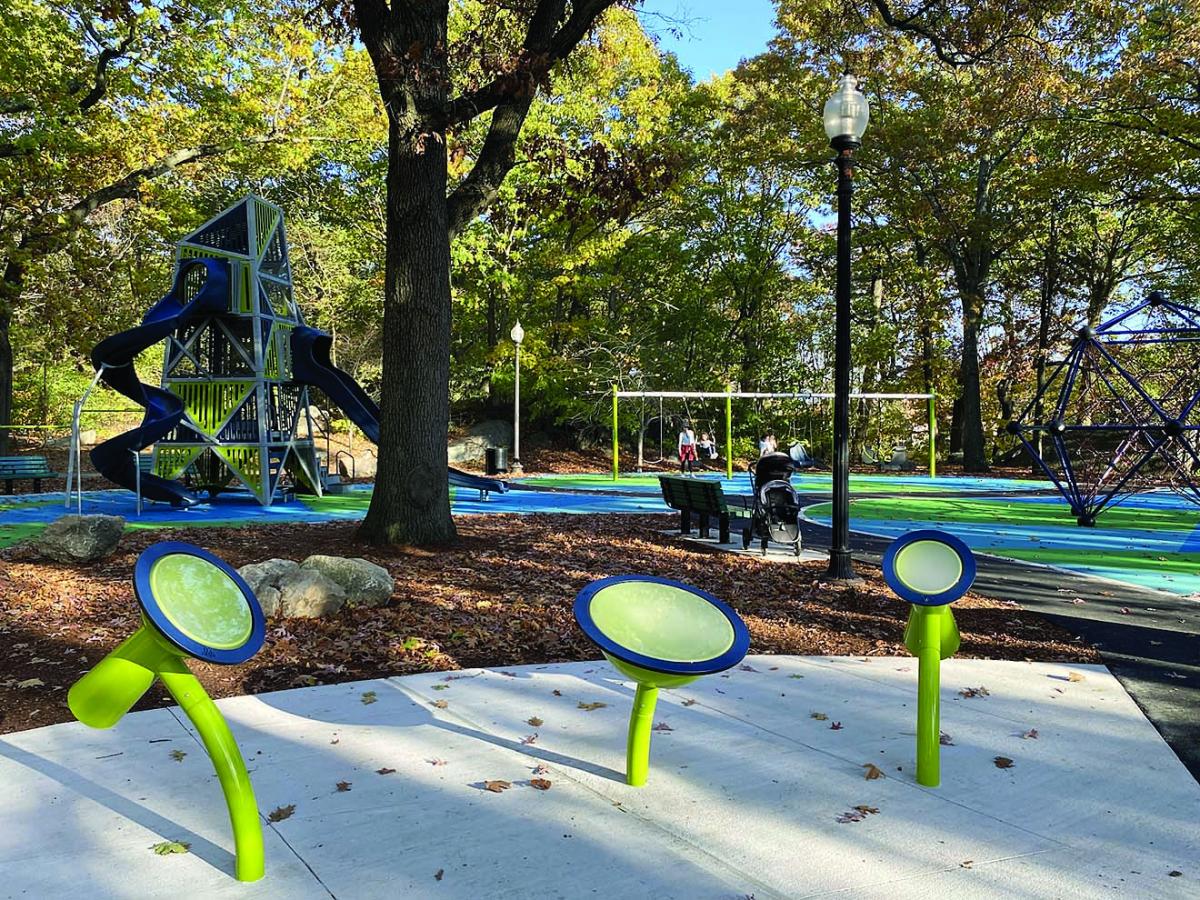 Percussion instruments are part of the new menu of fun at the playground.

The design retains the large climbing structure central to the playground while two age-appropriate play structures were replaced with new state-of-the-art equipment for children ages 2 to 5 and 5 to 12.

The project includes four bays of swings, but the bays are separated and rearranged with a single bay of swings with two toddler bucket swings.  A separate bay of swings features three belt swings, an ADA-compliant bucket swing, and a “Friendship Swing” that allows two children or a parent and child to swing together.  An ADA accessible drum set adds another play feature to the playground.

In response to requests from the community to emphasize the connection between the playground and nature, a curved path now leads users through the play area.  The path connects to a mulched surface around a climbing rock.  Children no longer need to traverse the area behind the swing bays to get to this exciting nature play.  This not only encourages children to reach out beyond the manufactured play area, but it also keeps them safer and out of the swing area.

Since 2014, the Walsh administration has invested more than $115 million across the city’s parks system, representing some of the most significant parks investments in Boston’s history.