Clementina “Tina” Chéry of Dorchester, who founded the Dorchester-based Louis D. Brown Peace Institute in 1994 after the murder of her fifteen-year-old son Louis, attended the State of the Union Address in the capitol this week at the invitation of US Sen. Edward Markey.

An internationally recognized expert in the field of homicide response who has served families of murder victims for more than two decades “is a teacher, a healer, a change agent, and one of our greatest forces for breaking the cycle of violence in Massachusetts and throughout the country,” said Markey.

“She is leading a movement for peace and justice for survivors of homicide and other forms of violence, and giving them dignity in their hours of most need. While our neighborhood streets suffer from the scourge of gun violence, Tina Chéry wages peace.”

Said Chéry: “This invitation is more than a personal honor, it is a recognition of the work that the Peace Institute does to transform society’s response to homicide and support those who experience murder, trauma, grief, and loss. I will be attending the speech on behalf of all those working to address the root causes of violence to make our communities safer, and on behalf of all survivors of homicide victims.” 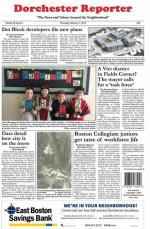