For years, the mantra of “soup, soap, and salvation” has summed up the extensive services that the Salvation Army offers to the community. During the pandemic thus far, the Army-run Kroc Community Center in Uphams Corner has demonstrated a steadfast commitment to its core values through a “comprehensive” coordinated emergency response that continues to provide food, cleaning supplies, and spiritual and emotional support to its neighbors in need.

On Aug. 1, the center re-opened its doors for restricted use of its health and fitness facility. But during the months when its doors were closed, the Uphams Corner community depended heavily on the institution, which redoubled its efforts on doing what it does best.

“There’s a saying, ‘When the country is at its worst, the Army is at its best,” said Chris Sumner, chief operations executive for the center. “We have a history of distributing food in times of emergency, and we have archives of responses to look at.

“Sandy, Katrina – you look at any disaster that’s hit this country and we’ve been there. This is in our wheelhouse. It’s part of what makes us unique.”

According to Sumner, the Army’s food distribution capabilities are among the best of any relief organization: at the state level, the estimate is that they will have served over 10 million meals by the end of this month.

At the local level, the center has distributed 14,000 food boxes from its Uphams Corner campus. Three days a week for the past several months, a team of 11 staff members coordinated with Greater Boston Food Bank and partners like Stop & Shop to distribute the boxes containing fresh groceries and produce to scores of people lined up outside the Dudley Street entrance.

Sumner recalled seeing in recent months “BMWs pulling up next to Impalas,” indicating the wide-reaching impact of the crisis.

“We tell our staff to not judge a book by its cover; everybody’s struggling,” he said. “I think we’re in that ‘sweet spot’ of not judging. Need has no color barrier.”

In one community room at the center, pallets of food boxes stacked nearly to the ceiling remain earmarked for the next month’s distribution. Sumner, who grew up nearby in Grove Hall, pointed out the importance of a hyperlocal approach in the neighborhood:

“This is a very island area — Cape Verdeans, West Indians, Puerto Ricans, Dominicans, Haitians. These folks know how to cook. They cook in volumes, and they cook in families. So when you put potatoes, carrots, beets in a box versus already produced stuff, those meals go a long way. “Our niche, knowing the food desert here and the demographic, is part of understanding what we do.”

The center has also given out thousands of “cleaning kits” filled with soap, disinfectant, laundry detergent, and masks in an effort to support its most vulnerable community members.

For all that, the center has had to modify its role as a space of spirituality, community building, and healing. Its onsite worship center remains closed to the public, with community members encouraged to engage virtually with regular services streamed live on Facebook.

In recent months, struggling residents have looked to center leadership, many of whom are pastors and social workers, for solutions to their problems.

“It’s a lot more than just food,” explained Major Elvie Carter, a pastor who works in the center’s social services department. “We also provide emotional and spiritual care. People have been stressed and with a high level of anxiety. Here we have pastors, social workers as well —people who are trained professionally to talk people through this and have those specific conversations about how they’re doing right now, and we’re still doing it. We get phone calls and emails all the time.”

The conversations have been wide ranging, said Carter and Sumner, with folks anxious about everything from the struggle for racial justice reflected in George Floyd’s murder, to childcare challenges brought on by the dual factors of closed schools and unemployment, to strained finances leading to missed rent or utility payments.

This summer, center staff have reached out to family members of victims of the recent spate of gun violence, as well as those who have lost loved ones to the coronavirus but have been unable to grieve properly because of funeral safety restrictions.

In addition to the extraordinary circumstances facing many families this year, people are still being displaced by fires and domestic violence.
“All the other things are still happening,” noted Carter. “They haven’t stopped.”

Sumner is hoping the partially reopened fitness facility and resumed access to health and wellness services— which he called a “priority” for young people with schools still closed—will help give residents a small dose of normality. 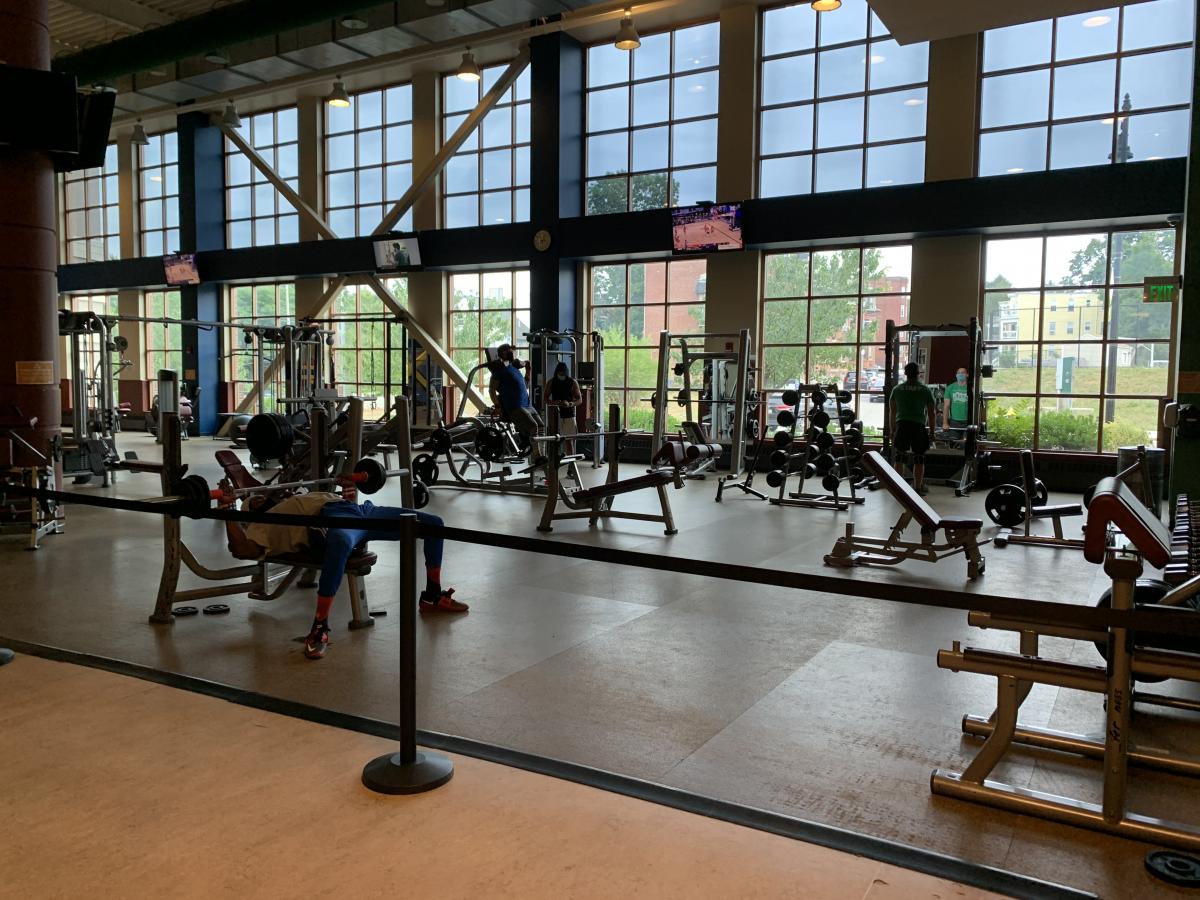 The center’s workout floor and cardio loft have been modified to maintain 14 feet between machines, with gym access only available in 90-minute sessions to be reserved ahead of time. Masks must be worn at all times and residents will have their temperatures checked at the door.
While team sports are still a no-go, the Kroc Center’s playing field will host outdoor exercise sessions, and its playground has reopened with limited capacity. The center’s pool and water park will remain closed for the time being, as will its children’s center and classrooms.

Even with the center operating at just a fraction of its normal programming, reopening the doors and bringing some in-person services back online have already gone a long way in reaffirming that link with the community, said Sumner.

“For as many people we see who come to use the place, I’d say we see the same amount of people who just want to say hi, to see we’re still here.”

The Kroc Center will continue to grapple with the enormous economic impact brought on by the pandemic and the responses it necessitates, said Carter, while noting that many members and residents who normally make regular donations to the center haven’t had the resources to do so.

Sumner credited Mayor Martin Walsh for his cautious approach to reopening and the city’s successful BPS meal program, but talked straightforwardly about the Kroc Center’s crucial role in mitigating the crisis.

“We took a huge load from the city...the Army doesn’t keep a scorecard. If we don’t get the funding, we’ll still do it. People need to understand the totality of the miracles that come out of this place.”

To learn more about The Salvation Army Ray & Joan Kroc Corps Community Center or to make a donation, visit bostonkroc.salvationarmy.org.