Tom Gillis walked up his street— Hinckley Street in Dorchester—in his graduation cap and gown on Sunday morning. He was greeted along the route by neighbors who cheered him on. Gillis is a senior and a member of the class of 2020 at Boston Collegiate Charter School. Photos by Cara Gillis

When it comes to talk about the city’s neighborhoods, Cara Gillis, who lives with her family on Hinckley Street, will allow for no comparison to Dorchester as “the best” in any ranking. As backup for that assertion, she related the following story to the Reporter this week:

“My oldest son Thomas is a senior at Boston Collegiate Charter School. With plans for a traditional graduation ceremony cancelled, and things still up in the air for an alternative, I wanted to do something for him in our little neighborhood, mostly to get photos to share with his grandmothers, but also so he could have something memorable to commemorate his achievement. 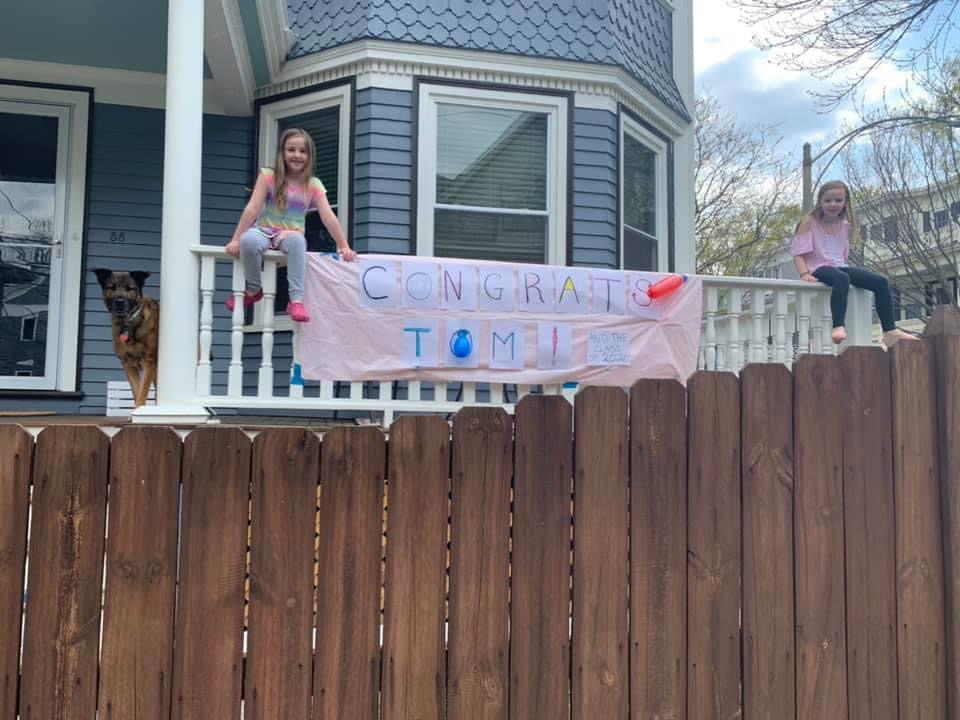 “Even though he technically hasn’t yet graduated – he still has a couple more weeks of on-line learning and two AP exams to take – I decided to do my “something” on the first Sunday in May when it wasn't raining.

“I planned a "graduation procession" up and down our four blocks of parallel streets by asking neighbors to come out on their porches and decks to clap for the graduate as he walked by in his cap and gown. His father would follow him in the car, playing "Pomp and Circumstance," and that would be it.

“I posted the request on Facebook and also taped a reminder note on everyone's front door on Saturday. I knew my neighbors would want to participate (really, isn't everyone looking for a diversion?), but I was very concerned that people would forget to come outside since time passes unnoticed when you are in your house with no schedule to follow. I suggested that people set an alarm on their phone to remind them to step outside at 11 a.m. on Sunday.

"Anyway, as Thomas set off down our street (very reluctantly, as he doesn't like to be the center of attention), I headed in the opposite direction so I could take a photo of him coming up the adjacent street. I arrived at the top of the street just in time to see him rounding the corner. He was wearing a big smile, holding cards, a gift box – and a bunch of balloons. 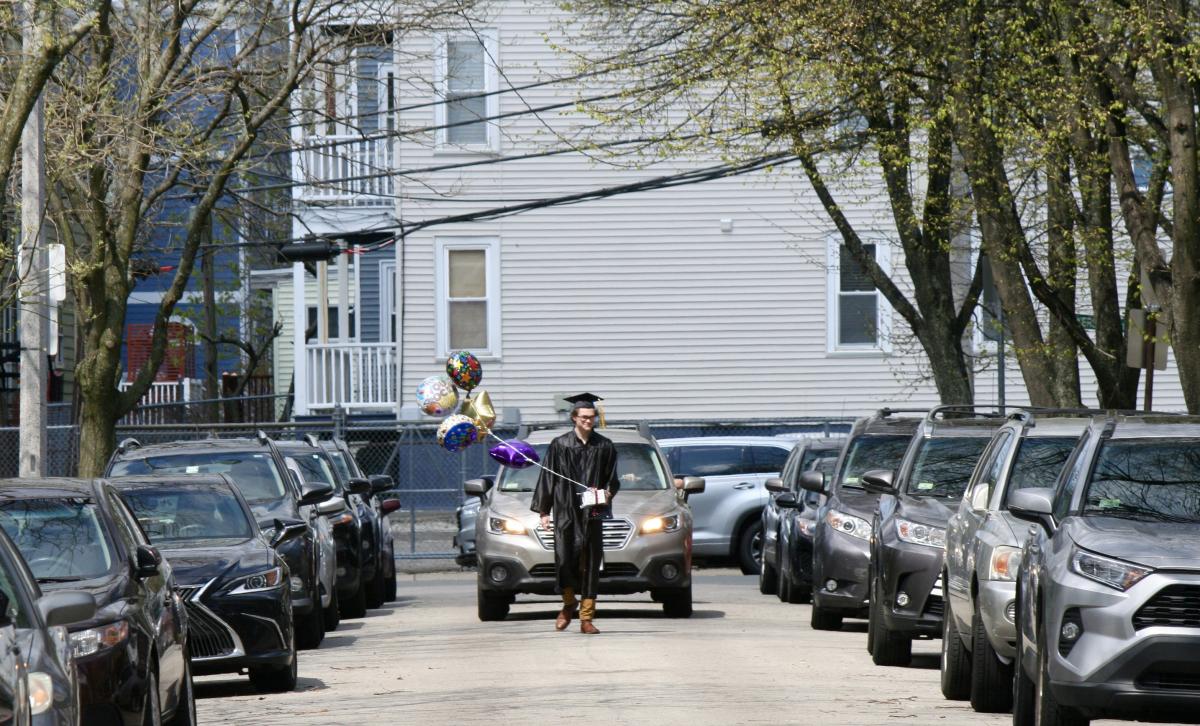 “Everyone was out clapping, cheering, ringing cowbells, blowing horns, and waving signs. The signs! They were the best. People had taken the time to make homemade signs out of whatever material they had on hand. That people, most of whom I don't know, took the time to make signs and hand him things he might appreciate (cash, gift cards, a Red Sox hat and even a Whoopie Pie from the Daily Market, among other items) was simply amazing to me and, given his nature, a little embarrassing to him. It was the people who caused that big smile.

“This outpouring was repeated on each of the four streets he walked down: ours, Mayfield, Morrill, and Trescott. It was far beyond any expectation and confirmed what I already knew. This is the best place to live because neighbors will go all out to support one another and step up when asked. 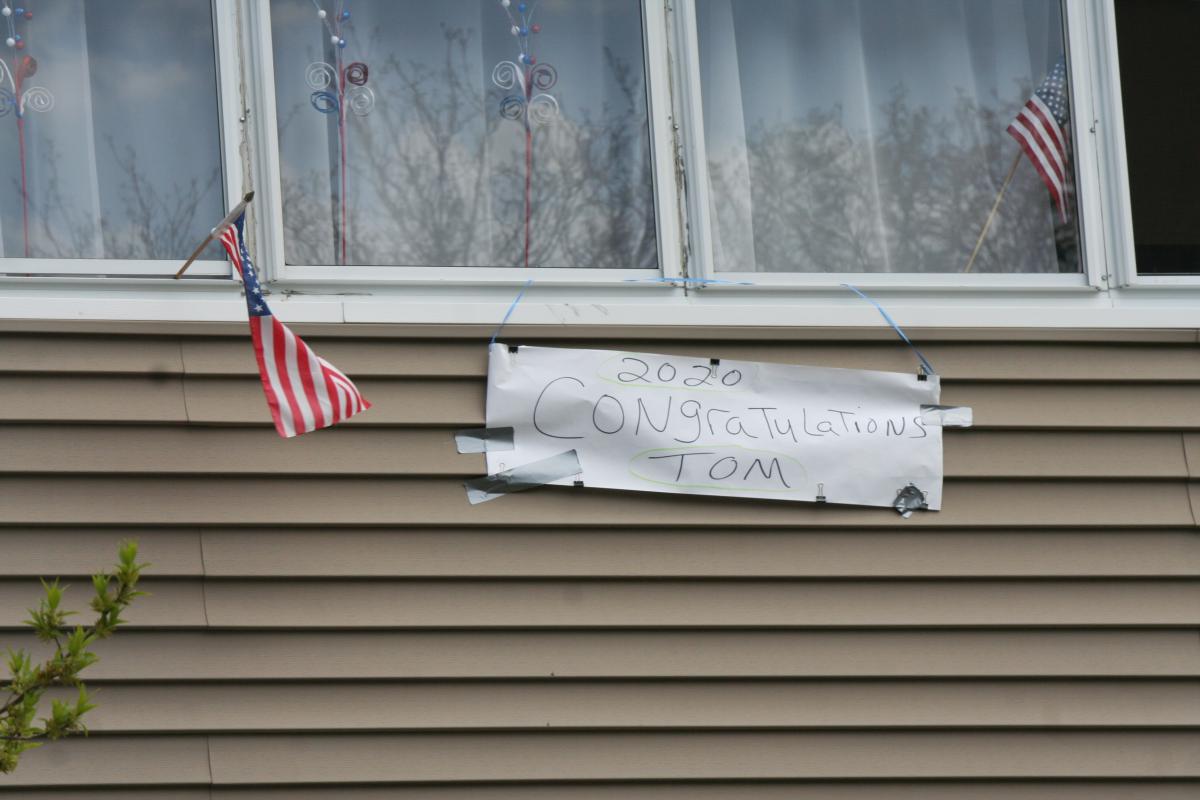