A virtual tour offers a look at how the facility's "Live Room A" would look. Photo courtesy The Record Co.

The Record Co., a non-profit community music workspace based in Newmarket Square, was among 31 organizations on the receiving end of $1.89 million in grants announced by the Baker-Polito administration last week as part of the fourth round of MassDevelopment’s Collaborative Workspace Program.

The recording and practice facility will receive $125,000 and use it toward the completion of already underway expansion efforts to revamp the space at 960 Massachusetts Ave. with brand new recording studios, practice rooms, and a community cafe/lounge space.

At an event in 2018, Matt McArthur, the founder and executive director of The Record Co., outlined the vision for the project and noted its broad scope.

“Expansion is a little bit of understatement,” he said. “It’s a full reconstruction of the facility, quadrupling down on what we know works about low-cost music workspace. We’re going to add additional recording studios and rehearsal studios that are available on a walk-in basis, and we’re going to make sure those spaces are available for community events.”

The Record Co. has operated out of the Newmarket Square property since 2010. After two years of planning and fundraising, work on the expansion project finally began last January 2 and is expected to be completed by late summer of this year. McArthur, who described The Record Co. as a “community music incubator,” said accessibility was one of the key issues that the renovation process would be tackling.

An exterior view of the Record Co.'s proposed facility as seen from Mass. Ave.

“Our defining vision as an organization is for a city where it’s as easy to get together with other people and to share music making as it is to gather in a public park and play basketball,” he said. “In the past year in particular we’ve been in deep conversation with our community...and we’ve learned two really important things: first of all, Boston has an all-out music space crisis. I don’t use that word lightly; it is a crisis. We are losing space for music making on a daily basis.”

McArthur gave as an example the closing of the WEMF building in Cambridge’s Central Square, which resulted in the loss of 35 rooms and displaced 200 musicians. “We also learned the playing field is not level,” he continued.

“There’s a huge opportunity gap for music makers. Women, queer and non-binary music makers, music makers of color, and those who make hip-hop all invariably will have a more difficult time expressing their creativity through music than anyone else...this is not a community until everyone has the same voice that everyone else has.”

That focus on inclusivity reflects the non-profit’s updated mission statement: “To remove the technical and social barriers between music makers and their creative visions.”

Part of completing that mission will simply be creating more space. The expansion will add: two recording studios for a total of four; fifteen fully equipped, soundproofed practice rooms ranging in size to accommodate large ensembles, small bands, and solo artists; a community and event space; and a kitchen with several lounge areas. 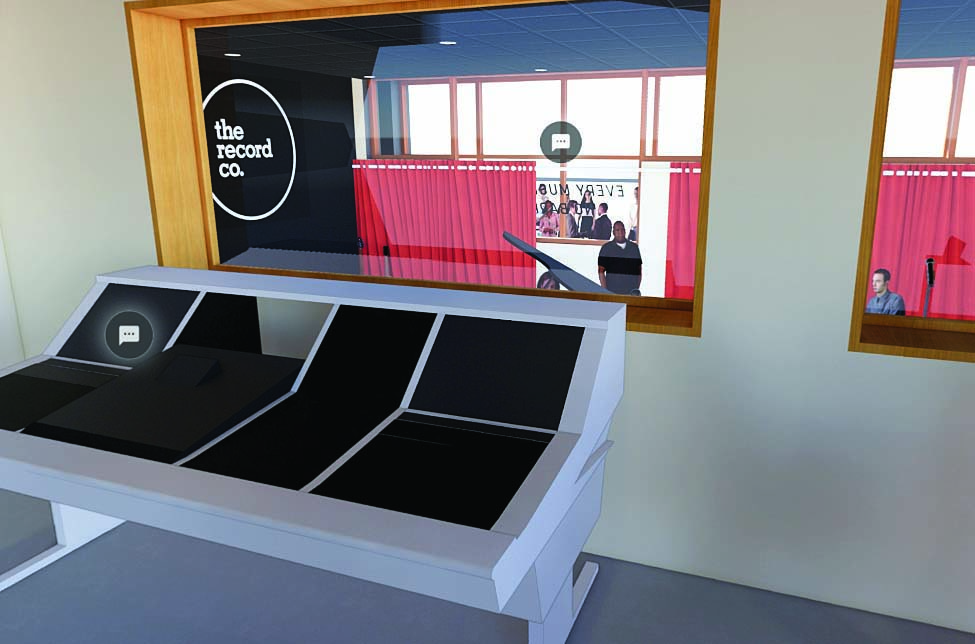 Control Room A, taken from a virtual reality tour of the proposed space.

As a whole, the new facility will offer a place where music can grow organically by serving as a convener, incubator, social hub, and work hub all in one.

Achieving the rest of The Record Co’s goal of eliminating barriers will happen through what McArthur called “equitable professional development programming,” which would take the form of “technical assistance grants” and “partnerships to create pathways from organizations in the community through our space.”

The new direction being taken by the nonprofit was steered in part by an in-depth community feedback process in which The Record Co. surveyed 519 music makers about the state of the music scene in Boston.

Results showed that the scant recording space available in the city was often unaffordable for survey takers. And while the highest percentage of TRC users define themselves as hip-hop artists, 81 percent of artists of color rated the Boston music community as “fair to very poor.”

Yet, with the rap scene booming in communities like Dorchester, it stands to reason that more and more emerging artists will be searching for places to rehearse, produce, and perform. McArthur believes that The Record Co. could serve as that “hub” for Boston artists.

“The thing that’s really important when we think about music making and how accessible it is for everyone is to remember that music is about people,” said McArthur. “It’s not about careers, or fame, or technical excellence; these are things that are obviously a part of music making, but at the end of the day it’s about people...We have to believe as a community that the most important thing is that people can make what they want to make.”