The simultaneous announcements of updated unemployment application figures and central bank action reflect the latest evidence of a dire economic picture amid the coronavirus pandemic, and efforts to address the situation.

Another 6.6 million seasonally adjusted initial claims were filed nationwide between Sunday, March 29 and Saturday, April 4, according to data published Thursday by the federal Department of Labor. Over the same span, the non-seasonally adjusted number of new claims in Massachusetts totaled more than 139,000. 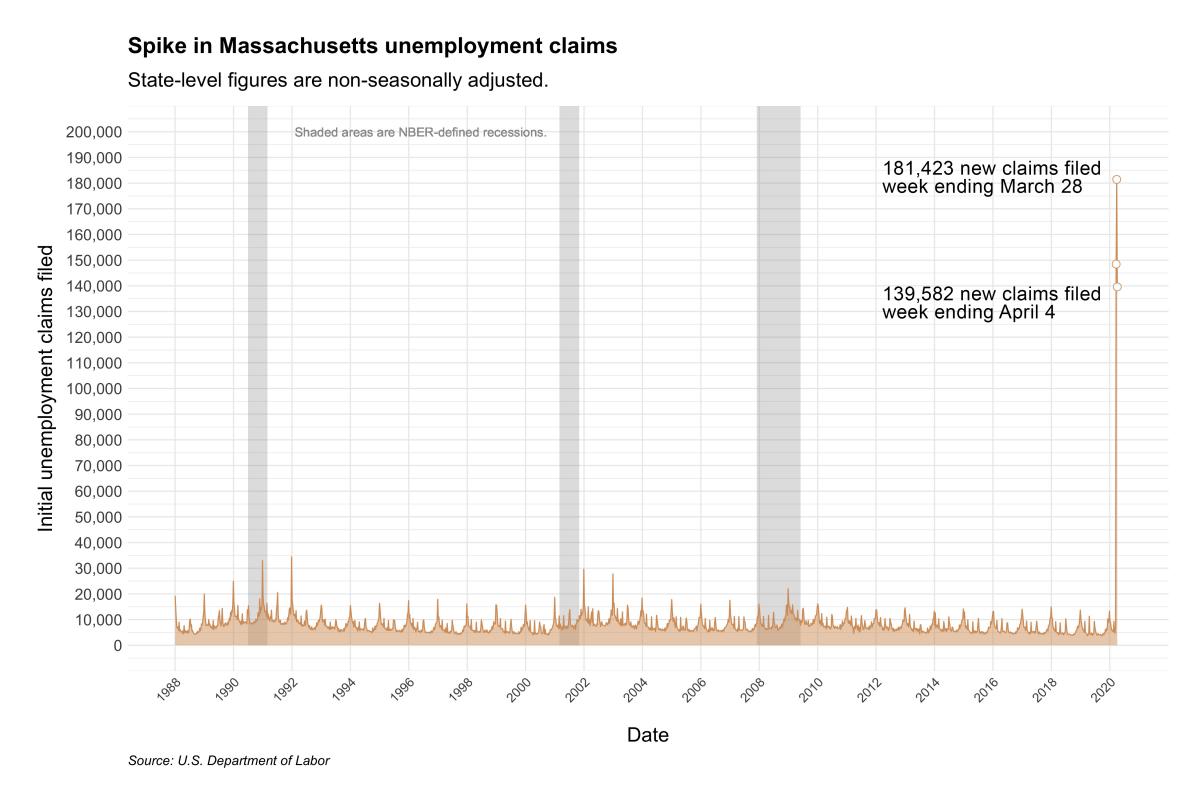 With businesses shut down to enforce social distancing and layoffs piling up, more than 10 percent of the country's entire labor force â€” a rate almost mirrored in Massachusetts â€” has sought jobless aid in the past three weeks alone, an unprecedented escalation in the decades for which data are available.

The 6.6 million new claims filed during the week ending April 4 represented a decrease of about 261,000 over the record set in the week ending March 28, which was slightly revised in Thursday's update. Even with a drop, new claims were still about 10 times higher than the February 2009 weekly peak during the Great Recession.

Massachusetts officials reported 139,582 initial claims for unemployment benefits last week, almost a quarter fewer than the 181,423 residents than the number filed a week earlier. But like the national trend, the Bay State's latest figures still constituted an enormous jump: about 18 times higher than the week ending March 7.

Over the past three weeks, close to 16.8 million Americans and 469,000 Massachusetts residents have submitted applications seeking jobless benefits.

Self-employed, gig economy and other workers did not qualify for the system but the CARES Act President Donald Trump signed last month makes up to 39 weeks of benefits available to them as relief from the COVID-19 crisis.

Gov. Charlie Baker's office said in a Thursday press release that it is working with an outside vendor to prepare for those claims and expects to begin processing them around April 30. The administration also said currently eligible claimants can now receive the additional $600 per week authorized in the federal act.

An Executive Office of Labor and Workforce Development spokesman could not be reached Thursday for comment on whether the eligibility expansion would lead to a further surge in applications or to describe how the system has handled the increased work.

Last week, the office said it has managed increased needs so far thanks to more than 500 additional employees added to the department.

The Federal Reserve responded to the recent climate by announcing Thursday that it would distribute up to $2.3 trillion in loans to soften the blows for households, employers, and both state and local governments.

That plan involves bolstering the Paycheck Protection Program that gives loans to businesses to keep workers on the payroll, establishing a Municipal Liquidity Facility that will offer $500 billion in short-term notes to give states, counties and cities more cash breathing room amid budget crunches, and directing up to $600 billion to increase loan availability for small- and mid-sized businesses.

Loans through the Main Street Lending Program will last four years, and the first year of principal and interest payments will be deferred. The increased funding will allow banks to make new Main Street loans or use the program to increase the size of existing business loans, according to the Fed.

"Our country's highest priority must be to address this public health crisis, providing care for the ill and limiting the further spread of the virus," Federal Reserve Board Chair Jerome Powell said in a press release. "The Fed's role is to provide as much relief and stability as we can during this period of constrained economic activity, and our actions today will help ensure that the eventual recovery is as vigorous as possible."

Estimates about the pandemic's long-term economic impacts are dire, and the ongoing trends will likely underline those concerns. The U.S. Bureau of Labor on Friday reported payroll employment declined 701,000 in March, driving the unemployment rate up 0.9 percentage points in the largest one-month rate increase since 1975.

The head of the Federal Reserve Bank of Boston said last week that the unemployment rate will likely rise at least as high as the 10.2 percent it hit in the wake of the 2008 global financial crisis, while the Pioneer Institute think tank estimated Wednesday joblessness could reach 25 percent in Massachusetts.

Other public safety net programs have also reported a surge in demand, albeit at lower levels than the rush for unemployment benefits. Total weekly applications for the Supplemental Nutrition Assistance Program, the Transitional Aid to Families with Dependent Children program and the Emergency Aid to the Elderly, Disabled and Children more than tripled over the past month.