The SDQD project will involve demolition and renovations to the area shaded in red.

The next multi-year phase of dramatic renovations at the UMass Boston campus is underway with demolition beginning to remove crumbling parts of the original 1970s-era central campus and add more greenspace and modern facilities.

The “Substructure Demolition And Quad Development” (SDQD) project will involve the demolition of the old science center, swimming pool, areas of the existing concrete plaza, and parts of the campus substructure to pave ways for a new, grassy quadrangle.

Contractors have already started “soft stripping” the science center and the pool building, and work to demolish the existing concrete plaza is slated to begin soon this summer.

The $114.5 million phase of the overall $155.5 million project is being managed by Hill International and designed by NBBJ, a global architectural firm.

Michael Kearns, associate vice chancellor for Facilities Management at UMass, said that funding for this phase of the project was secured before the university entered into a 99-year lease last year with Accordia Partners, developers of the 20-acre waterfront Bayside Expo site. He said that the money secured in the lease agreement will “probably” be used for future campus improvements [but] the money for this project was set aside prior to the engagement with Accordia.

Under the Bayside lease agreement with the UMass Building Authority, Accordia Partners is expected to pay UMass between $192.5 million and $235 million in a lump sum, the exact amount depending on the square footage permitted for construction.

The SDQD project is part of the university’s 25-year Master Plan that was laid out in 2009 with the overall vision of transforming the 1970s campus into a “cutting edge, sustainable, and attractive environment.” 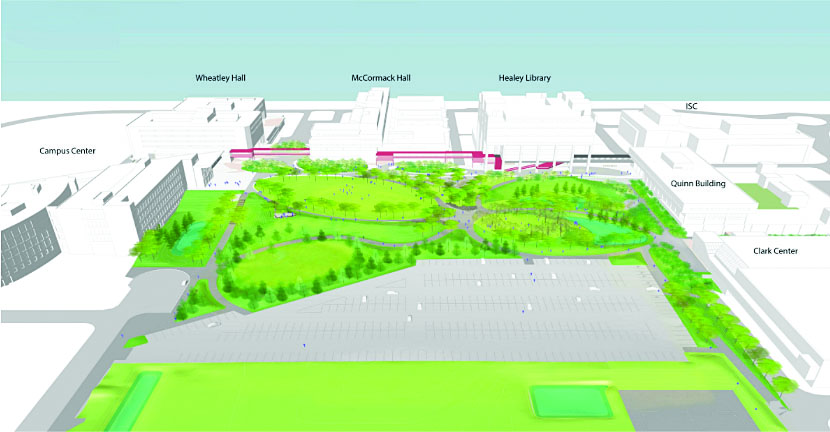 The plan calls for new buildings, landscapes, circulation corridors, and utilities, and serves as a blueprint and framework for campus infrastructure and landscape investments.

Kearns explained that the demolition of crumbling structures will allow for the construction of a multi-use, accessible green space for students, faculty, and the community at large.

“Some of the foundations under the buildings that were parking garages have had trouble with concrete falling, crumbling, and just being unsafe, so a major component of this is fixing those buildings,” he said, adding:

“The older science building has been emptied out and we are going to be tearing down the pool. The concrete in the center quad is kind of old and falling apart, so all of that is going to be demolished and replaced with green space.”

Kearns said the sloped quad will include infrastructure to allow for many adaptive uses, like outdoor entertainment and recreational space, as well as the potential for food trucks.

“This is a project that will transform the campus from a hardscape utilitarian concrete kind of campus to a much softer green space, much improved quad for the students, faculty, staff, and the community for that matter,” he said.

The university’s nursing program moved last year from the old science building to the newer Quinn Building, he noted.

“Last year we finished a new simulation lab for them, so they’ve got a great, shiny new space in that building now,” Kearns said, “I’d say that access for those students has actually improved.”

Over the last several years, master plan initiatives have paved the way for the project by relocating programs and functions from the Science Center. Investments have included the creation of an integrated science complex, utility corridor and roadway reallocation, the creation of University Hall, HarborWalk improvements and shoreline stabilization, a new residence hall, and the construction of the university’s first free-standing parking garage.

“The past couple of years there was what we would call an enabling project. There were a bunch of renovations to create spaces for all of the departments coming out of the science building,” said Kearns. “There were multiple renovations to existing buildings as part of the master plan so we could get to the point where we could implement this portion of the master plan.”

Although the pandemic stalled work for a period of time, Kearns said that “it has helped that the campus is pretty much empty because, of course, construction can be noisy and dusty, so we have a little more freedom in that regard, but it also caused us at least a month delay in March and April when everyone was trying to figure out what was going on with covid and things went remote.”

Kearns said construction crews will continue to follow health safety precautions as UMass Boston to resume educational programs in a hybrid method, with only a few courses held on campus and nearly all instruction continuing in remote fashion during the upcoming fall semester.  The bulk demolition of the old science center and portions of the substructure are anticipated between now and next spring. Construction of the new look is anticipated to end in 2022.

“This is going to be a couple-year-long project. It’s a lot of work,” said Kearns.