Boston development and planning officials this week released a list of 1,238 city-owned “vacant and underutilized” parcels spanning 9.5 million square feet of land across the city. Many of the parcels are in Dorchester and Mattapan.

Vacant municipal buildings and parking lots would see redevelopment, and already active municipal sites could see increased density. Other city-owned parcels could be transferred to community gardens or urban farms, or retained as open space that is permanently protected.

There are also 158 parcels, which total 360,000 square feet, that the city considers “vacant slivers,” their sizes ranging from 1,000 to 3,000 square feet. City officials want to sell those to abutters for use and maintenance.

The audit of city-owned parcels found that most vacant and underutilized parcels are already readying for redevelopment as affordable housing or open space. But the audit, released in a 48-page report, singled out several Dorchester and Mattapan sites as “high priority” for study and prioritization as affordable housing and large-scale development.

The Boston Public Schools’ Campbell Resource Center, at 1216 Dorchester Ave., is considered “underutilized,” due to its size and proximity to the Savin Hill MBTA station. “The 217,771 square foot parcel sits just east of Dorchester Avenue, is accessible to public transportation, and presently serves as a shipping and storage facility as well as a Welcome Center for BPS families,” the city audit says.

Another Boston Public Schools property, the central kitchen at 370 Columbia Rd., is also ripe for affordable housing, according to the audit. “This 84,218 square foot parcel could also be considered for added density, allowing for more options for supportive housing in the long term; however, existing operations would need to be relocated before the site is used for any other purpose,” per the audit.

More density should be considered at the Boston Public Health Commission’s Mattapan campus, a “sprawling property” that serves seniors, children and residents in recovery. The property, at 201-211 River St., is a 12-minute walk from the MBTA’s Mattapan trolley line. “There are two buildings on the grounds that are ready to be demolished and could be rebuilt with the specific use for supportive housing,” the city audit says. 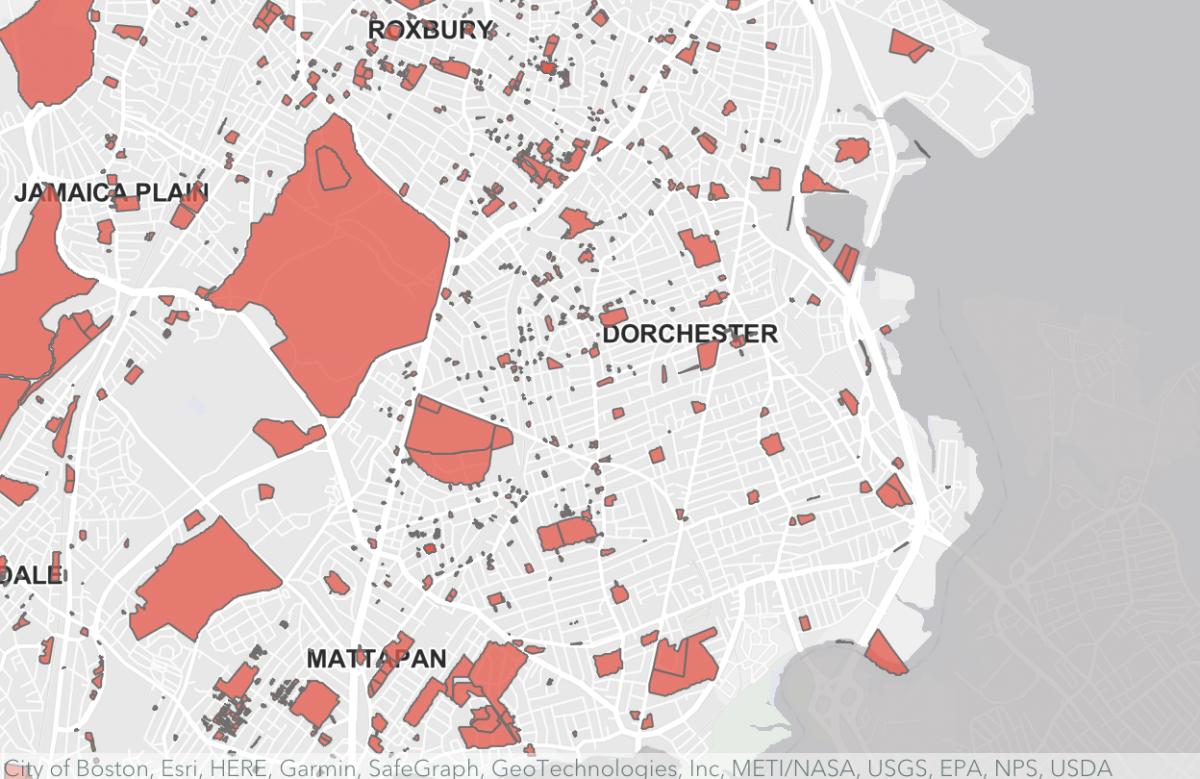 A look at the parcels in Dorchester and Mattapan that are part of the citywide land audit.

Wu unveiled the list of parcels at a press conference in Charlestown, in a parking lot across the street from Bunker Hill Community College. Steps from the Orange Line’s Community College MBTA station, the parking lot is a six-acre site owned by the Boston Planning and Development Agency. Wu was joined by her chief of housing, Sheila Dillon, and Arthur Jemison, the newly appointed chief of planning.

“The land the city owns is prime for analyzing where, and how and how urgently we can create housing at the low threshold supportive housing end of the spectrum, through workforce housing, through land for green space and active play for kids and families as well,” Wu said.

How quickly city officials move to redevelop the parcels will depend on neighborhood needs and the size, among other factors, according to Wu. “We have to be willing to think creatively and think urgently about what could come from the collectively-owned public land that we have.”

Jemison said residents will be able to weigh in on the redevelopment. "We look forward to a robust community process to ensure that the development of any of the sites identified is responsive to the neighborhood's needs, while creating new opportunities for mixed-income rental, homeownership, and open space in our communities,” he said in a statement.