The first recreational cannabis dispensary to open in Dorchester, High Profile x Budega on Freeport Street, has a familiar face behind the operations, particularly for anyone who has spent any time around Fields Corner.

The High Profile x Budega store opened in mid-March and has been doing good business so far, said co-owner Brian Chavez – whose family has been active in Fields Corner commercial circles for at least 30 years.

“We are the first recreational dispensary in Dorchester and we’re proud of it,” said Chavez, who also operates Antonio’s Hi-Fi Pizza with his brother in Fields Corner. “I feel like what we’ve seen so far are that about 50 percent of our customers are local and others come from other neighborhoods, or they work in the area and stop in for their cannabis products after work. Freeport Street is a very transient street and so there is a mix of local people and people from other neighborhoods.”

High Profile x Budega is one of three in the works for Chavez. There is another at 561 Dudley St. near Uphams Corner, and a third in Roslindale. While the Freeport Street site was the third of the three to get fully licensed, construction schedules put it to the top of the list in getting to an opening.

During the licensing process, Chavez said, he was introduced to Michigan-based C3 Industries and learned of their cannabis successes in Oregon, Michigan, and Missouri. The company also has a cultivation facility in Franklin, Mass., to grow and distribute their ‘Cloud Cover’ brand of cannabis strains. What intrigued Chavez is that C3 is built on an ownership where two of the three founders, Ankur and Vishal Rungta, are brothers.

“I feel like every situation and partnership is unique,” he said. “When we first started the process, we started licensing two locations… and we decided to partner up with them on this…I like that they are run by two brothers and it’s a family operation, much like my own situation…The family dynamic of them working together is something I can relate to with my family. I work a lot with family members and with my brother at the pizza shop. I know that unique dynamic of working with family.”

The Chavez family has been very active in the Fields Corner area for quite some time. Brian said his parents came to Boston from the Dominican Republic and his father is well known for operating Hannibal Auto Repair on Adams Street and on Victory Road – and now at the former Steinbach’s Auto site at the corner of Adams and Gibson Streets.

“My father has ties in the community for more than 30 years operating his business,” he said. “After I got out of college, I wanted to follow in my father’s footsteps as a small business owner and entrepreneur in this community.”

In 2015, Chavez and his brother took over the landmark Hi-Fi Pizza shop in Fields Corner and transformed it into Antonio’s Hi-Fi – which has re-grounded the popular shop as an anchor in Fields Corner. A few years later, across the street, he introduced the BOS Burger concept, which he said he closed last year as part of what was just a good business decision.

Those experiences introduced him to the cannabis industry, where he got a foothold and got through a complicated and constantly changing process rather quickly.

Having a familiar face had a lot to do with winning community approval amongst neighbors in Fields Corner and Columbia-Savin Hill, he said.
Given that he is a known personality in the neighborhood, even residents who weren’t happy about cannabis businesses were less skeptical of his involvdementy in the business.

“I think that was a big factor in the community being open to us here,” he said. “Even people who were against cannabis recognized me and my father and the work we’ve done and investment we’ve made in the community…It made it hard to say ‘no’ and I’m grateful and fortunate that the community has embraced the opening of this store.”

At the Freeport dispensary, assistant manager Angelica Morales helps run a tight and organized ship. The store and back-of-house operations are clean and run like clockwork. She said they offer everything from flower (cannabis buds) to edibles to oils to vapes and pills, among other things. The difference between them and others is the experience of the staff and the way in which cannabis is sold.

“We are one of the only stores that offers deli-style bud, which is one of the big things that makes us unique,” she said. “When someone wants to purchase from one gram up to one ounce – which is the legal limit – they can compare and smell and see what product they would like, and even mix and match up to eight strains. Other dispensaries have everything pre-packaged, but here we offer the deli-style selection, which you cannot get everywhere.”

Chavez said an expansive parking lot and a T accessible location, as well as an emphasis on local hiring, has also made a difference initially.

“The Freeport building was empty for a lot of years,” he said. “If a business located here, it wouldn’t last. The dispensary opening here has really changed that dynamic on this block.” 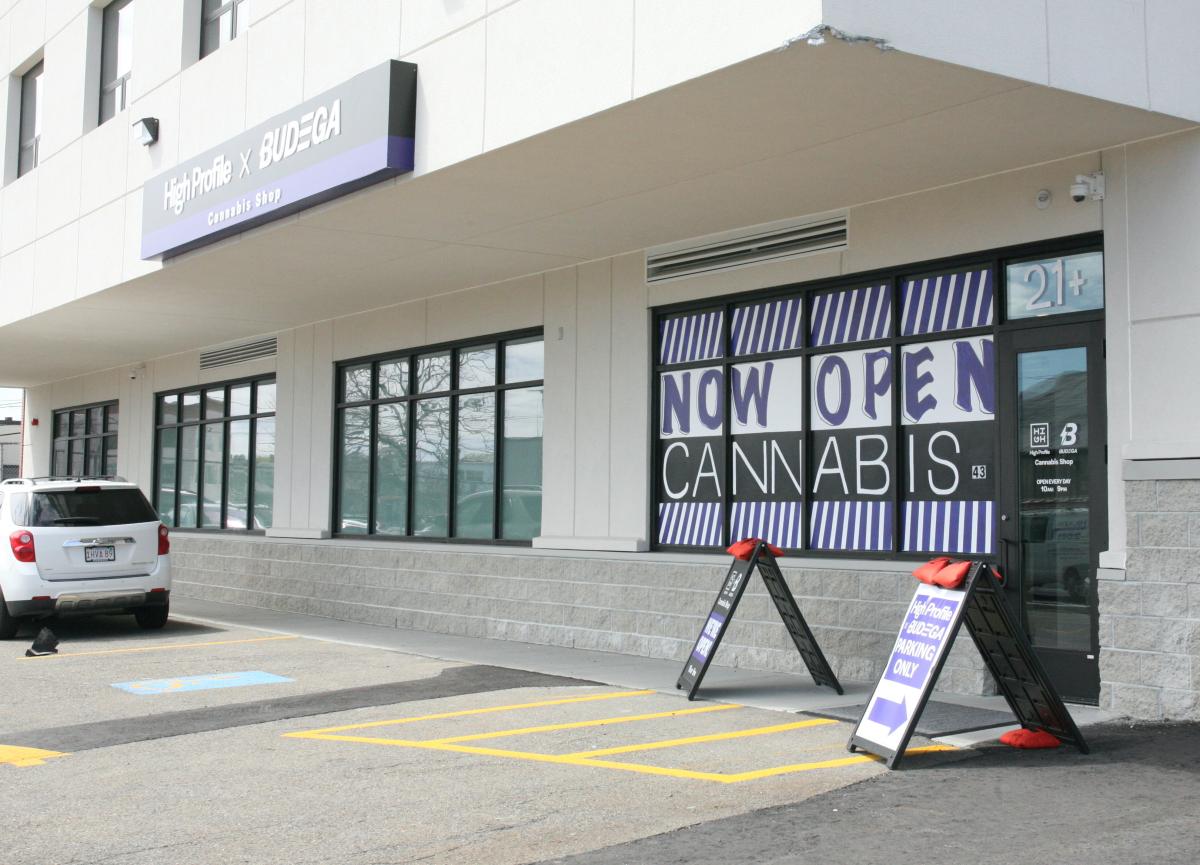 The parking lot and the facility are covered with security cameras and security employees, leading to an even safer environment in that area than prior to their arrival, both Morales and Chavez noted. In the end, though, being first on the block doesn’t necessarily allow a business to throw caution to the wind. Like the pizza or burger business, Chavez said it’s all about the customer experience.

“It’s like most other retail businesses – quality of product and customer service have to be prominent,” he said. “Making the customer feel important and being able to engage with the staff goes a long way. It can be the difference between coming here or driving 30 minutes to another location.”