Several long-vacant sites on Fernboro Street are up for a discussion on developing 12 units of housing with a parking lot in between two six-family buildings that will resemble traditional three-decker architecture.

The Fernboro site is part of a larger plan that envisioned the uses of several long-vacant lots in Grove Hall, including properties on Fernboro, Warren, and Dacia streets.

In the third meeting regarding the Fernboro situation on July 13, Jonathan Short of the Boston Planning and Development Agency (BPDA) unveiled a new plan for the long-vacant lots where the city would purchase a private lot for $250,000 and combine that with four city-owned lots, allowing them to create 12 units of affordable home-ownership opportunities in three-decker style buildings, along with adding a 12-space parking lot in the center of the development.

“We’re here today because things did not go as planned,” said Short. “The issue we were faced with after [purchasing the private land for $250,000] is it was a far steeper price for that land,” he continued. “That price has outweighed the current plan that we had planned to develop there.”

That previous idea, outlined in a March meeting, was to purchase the land for a substantially lower price from the private owner, and then develop eight units of affordable housing in four duplex buildings. However, a market assessment revealed the higher price of $250,000 for the fifth lot – located in the middle of the four city lots – and that made changes necessary. 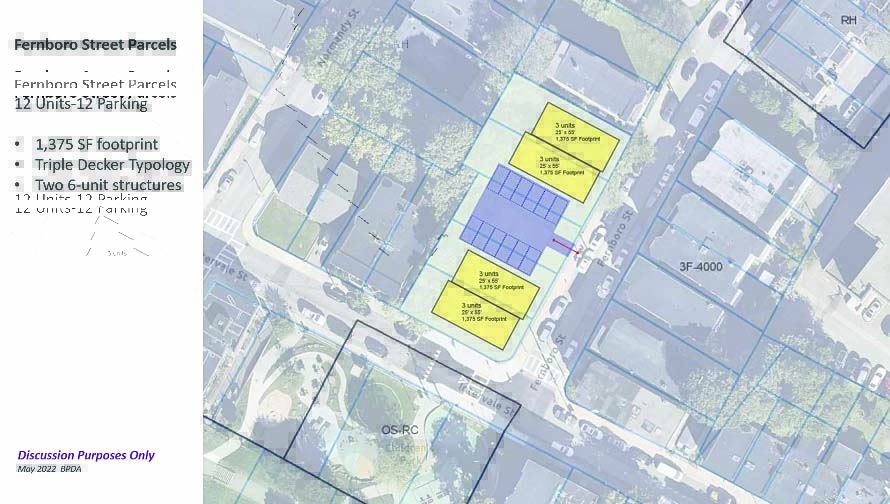 A rendering of the layout of the 12 units of housing bisected by a new 12-vehicle off-street parking lot on Fernboro Street. Photos courtesy of BPDA

“It ended up being $1 million for these eight units to be constructed in that plan,” he said. “When the cost is that high with public money…what we need is to make sure the benefit created justifies the cost.”

Parking on Fernboro Street has been a major problem because it is a dense neighborhood. Adding to it are school year issues brought by the King K-8 School behind Fernboro – with pick-up and drop-offs causing headaches and teacher/staff parking dominating the street.

With that clearly communicated to the city in previous meetings, Short said, their new strategy to justify the cost of development was to create 12 units, but to provide one-to-one parking for those units in a parking lot sited between the three-decker buildings. Along with that, the city intends to help residents of Fernboro Street petition for resident permit parking on their street, and to also help elderly and handicapped residents on the street get handicap parking spots declared. Using those three prongs, Short said, they believe they can develop the property and respect neighborhood issues.

“With these new parking plans, I think that, coupled with the move to affordable home ownership, is an overall great effort for this community and the Grove Hall community,” he said.

Many members of the immediate community, including Michael Kozu, Nathan Sabir, and Kathryn Wheaton expressed some concerns about the parking plan. First off, they said, resident parking doesn’t ensure that only residents of Fernboro will be able to park there. Residents worried that those living on the dense areas like Lawrence Street would migrate to Fernboro to park in resident permit parking spaces. There was also a call for the city to work with Boston Public Schools to resolve issues of parking and congestion around the King K-8 School.

It was suggested that as part of the development on Fernboro, the city should use the opportunity to work with BPS to target underutilized space at the King for staff parking and a better organized arrival and departure area.

The comment period for the proposal closed this week (July 27), and the goal is to issue an RFP to the development community for the proposed plan in the coming months. More meetings are expected on the proposal, but none have been scheduled yet.