In the bedroom community of Wilmington, just south of Lowell, sits a little white house, with paint peeling from the trim and a mailbox emblazoned with the American flag at the end of the driveway.

While homeowners Edward Kaizer and his wife, Mary Tassone-Kaizer, note that the house has been in the family for generations, they were shocked when a WBUR reporter showed them a clause buried in their property records, from 1897, stating that their land cannot be occupied by “negroes or Irish” or anyone considered “disorderly people.” 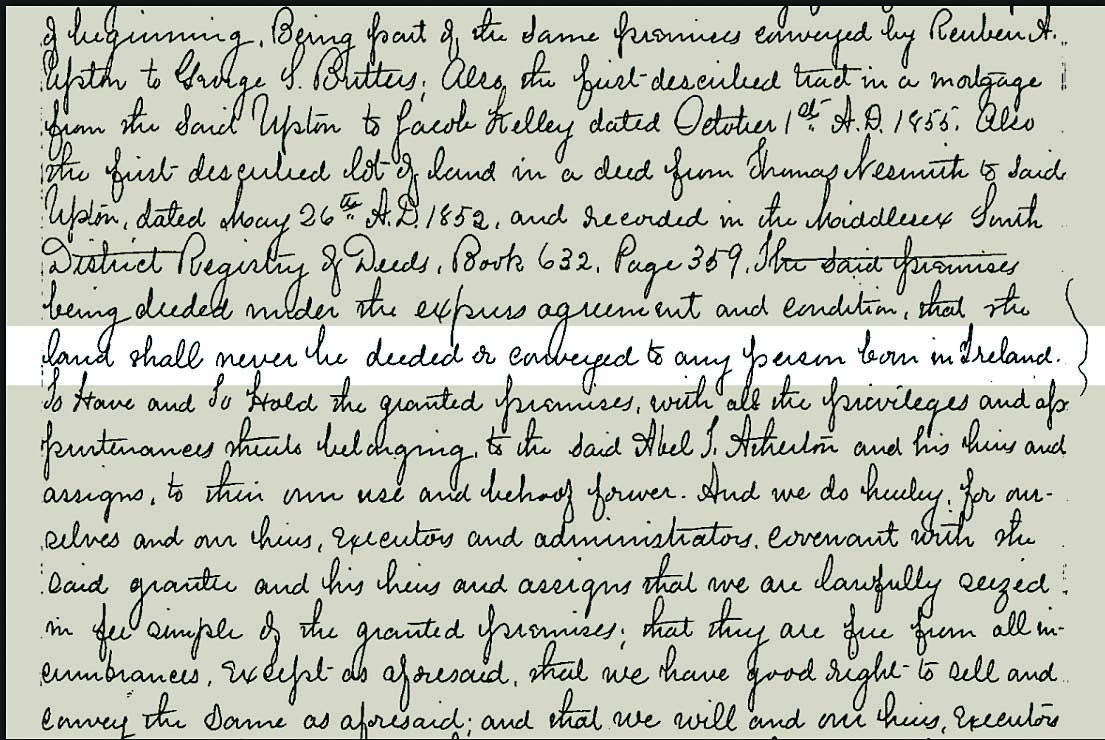 A deed from Lowell dated 1881 reads the “land shall never be deeded or conveyed to any person born in Ireland.”

“Oh, my God,” said Tassone-Kaizer, who works in accounts receivable for a local company. “Did your parents know about that?” Responded her husband, a high school teacher in Wilmington who grew up in the house: “If they did, they didn’t say so.”

Kaizer held the document with a stunned look, then said that his mother was an Irish immigrant. “It’s disgusting,” Tassone-Kaizer replied. “We don’t stand for any of that.”

So-called racial covenants can be found in property records all over the country, many of them restrictions written from the late 19th to mid-20th century. Some bar landowners from selling or renting to people who aren’t white, others target certain immigrant groups — like Poles, Italians, and Irish. A deed from Springfield in 1916 states that the “lot shall not be resold to a colored person, a Polande, or an Italian.” This language appears on the deeds for at least four separate properties sold by a single seller in Hampden County.

Experts note that the racist clauses have had no legal standing for decades, thanks to court decisions and legislation. In 1948, the US Supreme Court ruled that racial covenants were unenforceable, and in 1968, Congress outlawed them altogether as part of the Fair Housing Act.

But some state lawmakers and judges remain concerned that the clauses are still included in property records, a reminder of the country’s — and the state’s — legacy of racism. And now they are trying to figure out what to do about the matter.

The Massachusetts Land Court recently started letting judges add a note to deeds saying the covenants are void. “It allows for a formal repudiation of the records,” said Lauren Reznick, an administrator with the land court, “and it does so without erasing history.”

Some say that’s not good enough. A quarter of state lawmakers have sponsored a bill to let homeowners erase the racist language from their property files altogether.

State Rep. John Barrett, of North Adams, proposed the legislation after some constituents complained they couldn’t remove racial covenants from their home records. “As one said to me: ‘It’s just not who we are and we’d like it removed,’ “ Barrett said.

“It doesn’t surprise me because I’ve lived it,” said Ron Bell, who runs the nonprofit Dunk the Vote. Bell cited the violent clashes over busing in Boston, the Charles Stuart case (in which a Black man was wrongly accused of murder) and “just being Black in Boston.”

Bell argues that the racial covenants are a reminder of that history — and that the problems persist. Black and brown residents are less likely to own homes in the state, and far more likely to face discrimination by real estate agents.

In the cavernous records room at the Middlesex North Registry of Deeds in Lowell, Register Richard Howe shares an example of a racist land covenant, tied to a property sold in Lowell in 1881: “Said premises is being deeded under the express agreement and condition that the land shall never be deeded or conveyed to any person born in Ireland.”

“You can’t get more specific than that,” he said.

The deed hits close to home for Howe. He said that seven of his eight grandparents immigrated to Lowell from Ireland in the late 1800s and may have personally faced this kind of discrimination. An aficionado of Lowell history, he said the anti-Irish deed language reminds him of the sentiment expressed at the dedication of a new Superior Court facility in 1898.

“The speeches were almost saying, ‘It’s important that we have this building that communicates the rule of law, because we’ve got all of these people who don’t speak English arriving on our shores,’ “ he said.

Howe says there’s no way to identify all the racist restrictions buried in old deeds — or even come up with a reliable estimate of how many there are. Property records in Massachusetts date back to the 1620s. And the vast majority are handwritten and not searchable. So any count would have to be done manually.

“It would take really going through every, every document,” he said, noting that there are 14 million pages of property records in his registry alone. And there are 20 other registries across the state.

So many of the racist restrictions will likely remain buried — until Howe, or someone else digging into the old records, finally stumbles on the passages.