‘Dorchester Duo’ stars at Dexter Southfield: The Brookline school’s football team features a one-two punch – the “Dorchester Duo” of running backs Takai Whitmore, left, and Quinn Carver – that has been running over most every opponent this year. Said the 17-year-old Carver: “It’s so awesome that we’re shredding it up. It’s really cool to be able to rep the Dot that way.” Seth Daniel photo

This year’s Dexter Southfield School varsity football team contains a one-two punch in a backfield that has been running all over most every opponent in New England Preparatory School Athletic Council (NEPSAC) competition.

The team from Brookline, which ended the regular season at 7-1 with a 32-25 win over archrival Pingree last Saturday, is prepping this week for a home playoff game this Saturday against Lawrence Academy that will determine the winner of SEPAC’s Todd Marble Bowl. The contest will likely feature running backs – and defensive standouts – Takai Whitmore and Quinn Carver of Dorchester as key factors.

The strong season-long efforts of both athletes have earned them the moniker “Dorchester Duo” from students, coaches, parents, and fans of Dexter Southfield. “Not to be cliché, but they do both have that Dorchester blue-collar edge to them for sure,” said Dexter Southfield Head Coach Casey Day. “That’s a huge luxury to have two No. 1 running backs and both have the capability to take over a game for us.”

Earlier this season both players blasted into the spotlight against the New Hampton School when each ran for over 100 yards in a winning effort, nabbing “Players of the Week” honors in the Boston Globe. Last Saturday, Whitmore had a 40-yard scamper for a touchdown, and Carver had two key receptions on screen passes out of the backfield against Pingree. 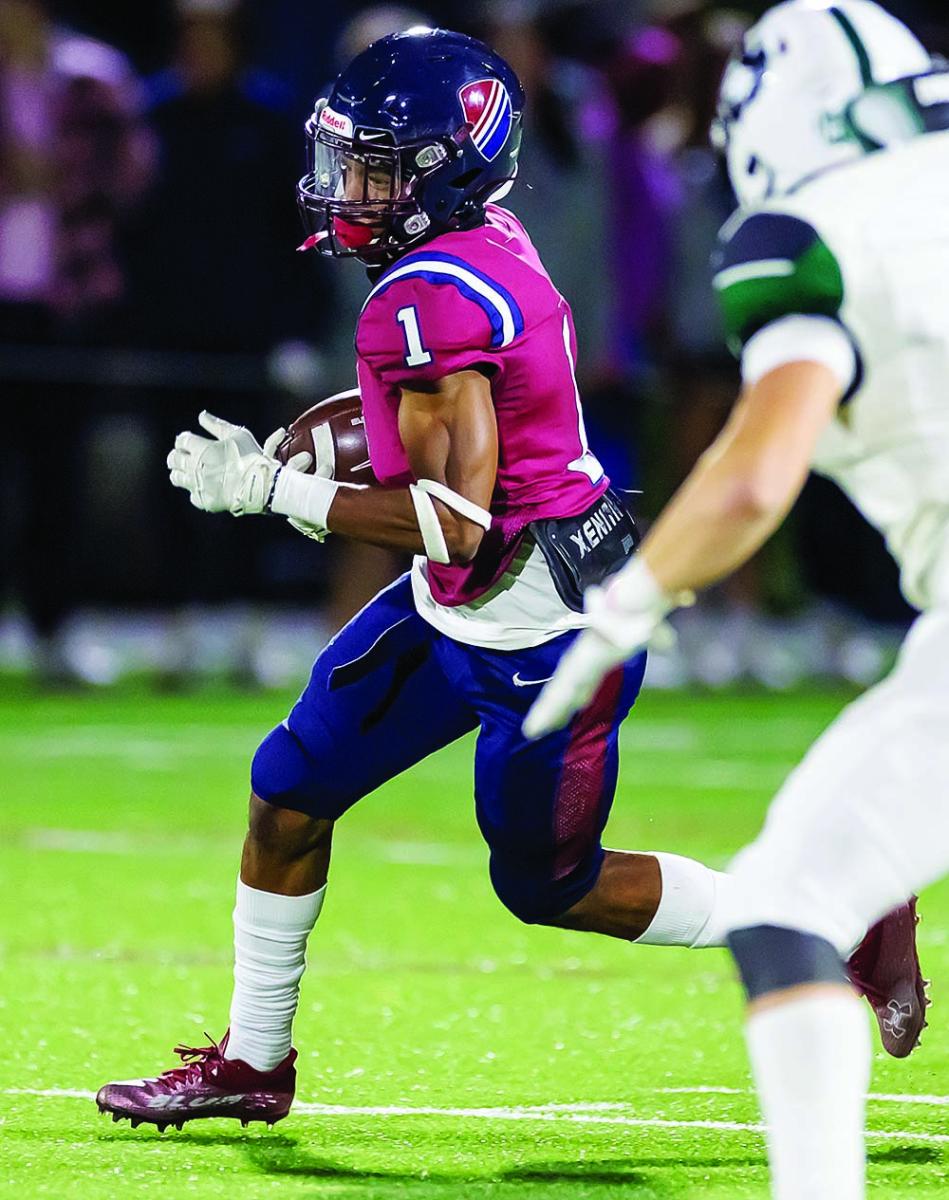 Takai Whitmore is also a top-ranked defensive cornerback who will head to Bucknell University next fall.

Both young men also play defense as well as they run, according to Day. Whitmore, 18, is a top-rated defensive cornerback who will head to Bucknell University next fall on a football scholarship.

But it’s on offense that they have found a special synergy that has defenses spinning in their cleats.

“We drive to school and games together,” said Whitmore, who transferred in 2020 from Boston Latin Academy (BLA). “Things are a lot different here and there are so many opportunities. I decided to transfer because it was time for a change, and it gave me a chance to concentrate more on my athletics.” 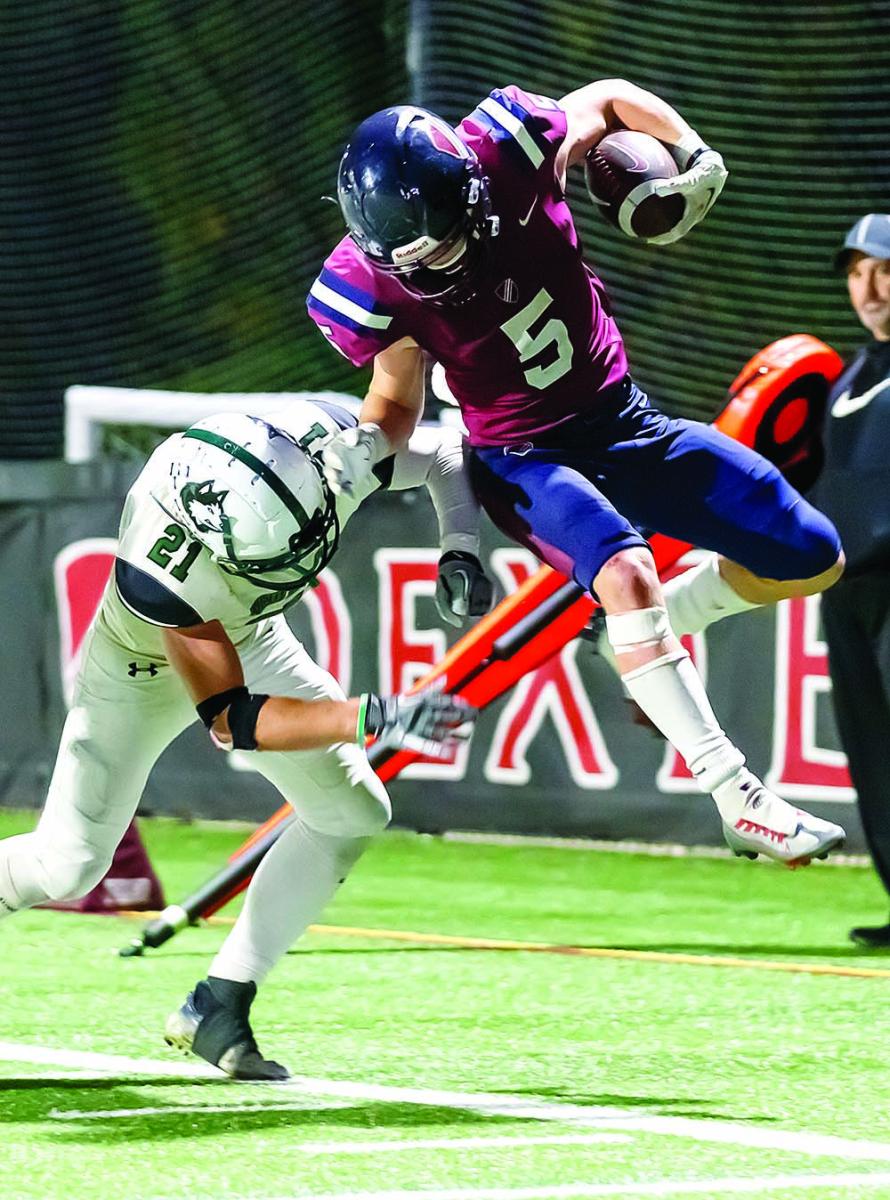 Quinn Carver has excelled on both sides of the ball this season.
Photos courtesy Dexter Southfield School

Carver, who said his father, Phil, calls them the “Dorchester Duo” and can be heard yelling as much from the stands at most games, hails from a well-known football family, with his great-grandfather, George “Gigi” Kenneally, being an early professional football player and team owner in the budding National Football League (NFL) of the 1920s and ‘30s – once playing for the Chicago Cardinals and Boston Braves [later the Boston Redskins before their move to Washington D.C.].

After retiring as a player, he was a celebrated coach at Revere High School and Brandeis University. Football has been so ingrained in the family, the young Carver said, that when he tried his hand at soccer early on, the football genetics overpowered that inclination.

“I started with soccer, but I was always the one out there hitting kids when I wasn’t supposed to and running around like a maniac,” he said. “I think my dad was watching that and told my mom, ‘I know you don’t want him to be a football player, but we’re a football family.’ That was first grade and we strapped up and went from there.”

Carver played his early football for South Boston Pop Warner, while attending Dorchester’s Boston Collegiate Charter School. He made the move to Dexter Southfield in the seventh grade to concentrate more on athletics.

Whitmore began his schooling at the William Monroe Trotter School on the Dorchester line, while playing Pop Warner for the celebrated Dorchester Eagles program. “I played running back early on and only played for the Eagles and we did make it to the nationals a couple of times,” he recalled.

Both say they’re having the time of their lives, particularly since they just started at the running back position this year, moving into the backfield from wide receiver. For Day and the Dorchester Duo, there are no regrets.

“If he gets tired, I’m out there. When I get tired, he’s out there,” said Carver.