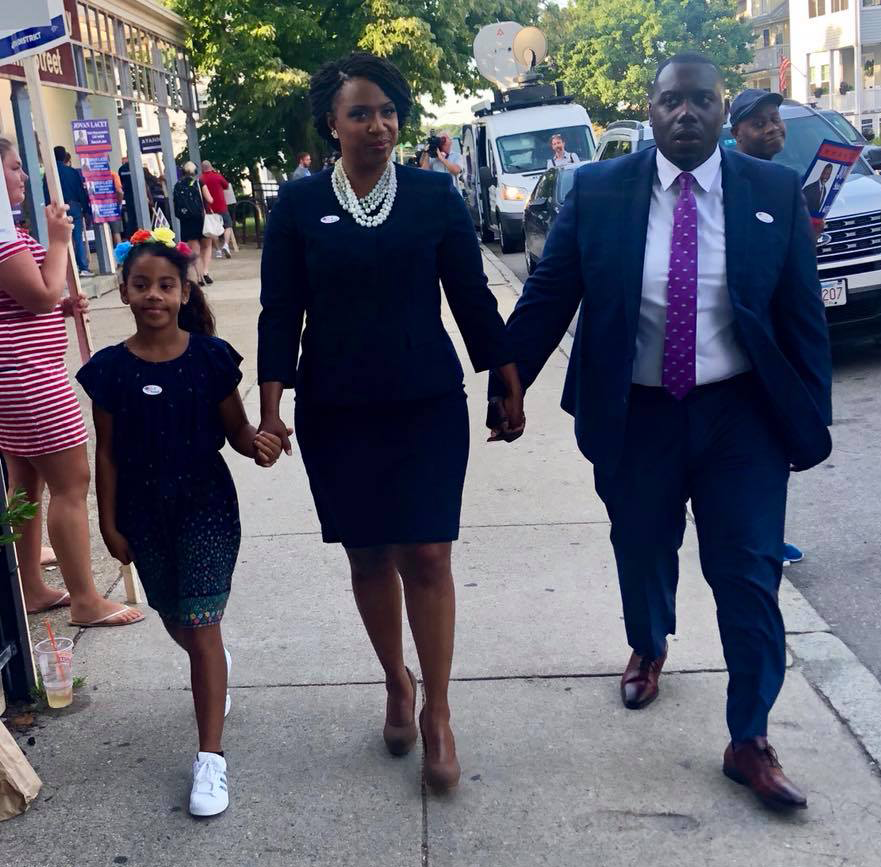 Councillor Ayanna Pressley and her husband Conan and stepdaughter Cora walked to the polls at the Adams Street Library on Tuesday, Sept. 4, 2018. Pressley campaign image

So it was in the 7th Congressional district on Tuesday. Who among us saw Ayanna Pressley, the pride of Ashmont, beating Mike Capuano, a 20-year veteran of the US House and a reasonably well-liked incumbent, by 18 points?

We expected a squeaker, maybe even one too close to call. Pressley would win Boston, where she’s a proven vote-getter in the progressive precincts that make up most of the capital city’s portion of the 7th. Capuano would clean up in his home base. It might come down to Milton, or even Randolph, sections of the district where both candidates — including the incumbent—were relatively unknown to voters.

Instead, Pressley dominated across the district. She beat the former Somerville mayor in large parts of Somerville, with the city finishing in a near dead heat. Dorchester, with one or two predictable exceptions in Ward 16, was solidly in her corner despite the prevailing “wisdom” that the Democratic brass would persuade voters to stay the course.

It was clear to us early on that it would be a very good night for Ayanna Pressley when she notched big wins at the Lower Mills Library, the busy double precinct that includes both Dorchester and Mattapan. It wasn’t close: 584 to 275.

Voters heading into the polls in our neighborhood were motivated. We’ve seen it before for Barack Obama, Deval Patrick, Andrea Cabral, (and, yes, Linda Dorcena Forry). When there’s a viable candidate of color on the ballot with an opportunity to score a historic victory, the electorate will respond. And respond we did.

Our electorate is discerning and sophisticated. This was not a rote “throw the bums out” election. The same voters who unseated Mike Capuano eschewed voting for an alleged youthful reformer in Josh Zakim, returning the veteran Bill Galvin to the Secretary of State’s office. Dan Cullinane, the competent progressive yet conventional state representative incumbent, won alongside Pressley. So did Rachael Rollins, the promising and impressive attorney who emerged as the ticket-topper in a very strong field of five candidates for DA.

Identity politics played a role on Tuesday, to be sure, but the balloting was leavened by a smart electorate that can be counted on to pick the best of the bunch.

And that’s what Ayanna Pressley was yesterday, the better of two very good options. She represents the promise of change, but she is also a seasoned and pragmatic political operator who not only knows how to use her bully pulpit, but who also can play an inside game. She’ll be a fast study.

Best of all, from our vantage point: She’s our neighbor. Old-guard neighborhood folks who cling to an outdated notion of who’s really “from Dorchester” should take this opportunity to show themselves out. Pressley has been living here for two decades. She’s one of us.

Mike Capuano’s legacy in this section of the city will live on mainly through the Fairmount Line. He resolutely championed the revitalization of the underused transit line in ways large and small. His commitment to making the Fairmount a viable transit mode for our community is one that will yield important dividends for Dorchester and Mattapan far beyond his tenure.

His career in Congress was also notable for his prescient – and in our view, correct—votes against military action in Iraq. He has been a voice of reason.

Pressley’s promise is that she will package all of Capuano’s best qualities and take them to the next level. It’s a tall order, but we’ve seen her in action. She’s up to the challenge.