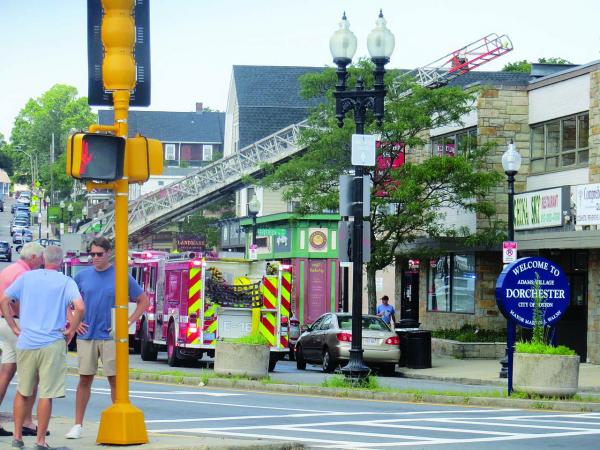 The scene on July 27 at 510 Gallivan Blvd. Ed Forry photo

Efforts to bring three popular Adams Corner eateries back online after a small but disruptive fire last month are ongoing this week, according to the building owner. The Butcher Shop, Windy City, and China Sky remained closed on Tuesday as work continued to upgrade the 60-year-old building’s electrical system to comply with existing city codes.

The delayed re-opening has been “annoying” for the restaurant owners and their customers. But landlord John Lydon says that the more extensive repairs will be largely done this week.

On July 27, a small electrical fire prompted a large response from the Boston Fire Department, which found smoky conditions in the basement of 512 Gallivan Blvd. just after 2:30 p.m.

Lydon said that an overheated electrical transformer is suspected to have been the cause. Temporary power was restored within a week, allowing other tenants— including an insurance agency— to re-open. But the restaurants have different power needs and more layers of inspection to pass before they can re-open. Replacement parts needed to make permanent repairs take longer to arrive, he said, adding that they arrived on Monday.

“We are going all hands on deck to get the work completed, hopefully in the next 1-2 days,” Lydon said, though he noted that city inspections and approvals may take longer for the restaurants.

“While we’ve been waiting for the equipment, we’ve been doing other work to prepare for the main installation,” he said. When it’s done, you’ll effectively have a whole new electrical system and a renovated second floor that’s been vacant for about a decade.”

The Irish Pastoral Centre and a law office will open in the renovated second floor space, Lydon said. Another new tenant— a golf-related business— is slated to open soon on the first floor in space that formerly housed Metro PCS.

In an otherwise booming Dorchester, it has been a trying couple of years for Adams Village— mainly due to fire and its aftermath. In September 2017, a more serious blaze knocked out Blasi’s Cafe— a terrific bar and restaurant at the corner of Adams and Minot— along with PS Gourmet, a coffee shop that was a very popular spot in the village. There’s been a lot of buzz — but no definitive word— about whether or not Blasi’s will re-open.

In a video posted on Facebook last June, Ken Blasi, one of the owners of the building and restaurant, said that it had been “a really tough run” since the fire. He said he hoped to get the restaurant back open and be “bigger and better than we were.”

But, it’s not clear when — or if— that will happen.

In June, the owners of PS Gourmet issued a statement saying that they would not be re-opening. They encouraged customers of the coffee chain to visit locations in South Boston and Braintree instead.

“As much as we loved being a part of Adams Village, it is not going to be possible for us to go back into our old location. The owner of the building has not given us access to the space to rebuild,” the Facebook statement read.