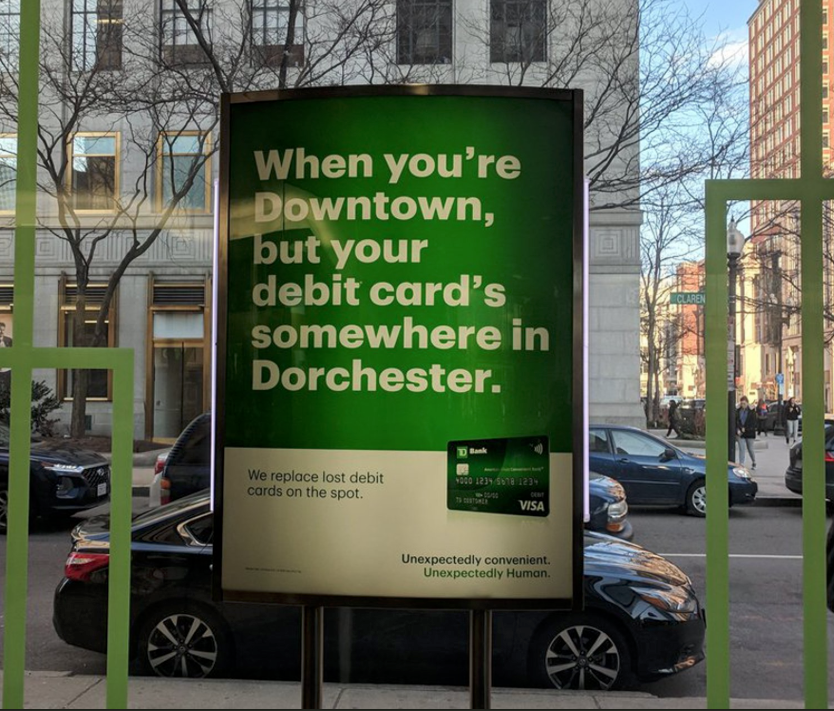 “When you’re Downtown, but your debit card’s somewhere in Dorchester.”

A copywriter hired by TD Bank decided this would be a good way to attract customers, and TD Bank officials apparently agreed.

They couldn’t have been more wrong.

Last Wednesday, a customer spotted the pitch in front of a TD Bank branch in the Back Bay and made a sensible interpretation— one that Dorchester people, by and large, grasped immediately: The card in question was not left behind on a customer’s kitchen table or in his or her office back on Dorchester Avenue or at the Dot Brewing Company after a night of partying. It was “somewhere” in Dorchester because something sinister was in play.

You are free to conjure up your own answer to the mystery— but there’s no doubt that a negative inference was ready for the taking from the TD Bank promotion.

Mark Crandall, TD Bank’s regional president for southern New England, was quick to respond to the negative critique that erupted on Twitter (including from this space.) He ordered that the offending ad be taken down immediately, dialed up a review of the whole ad campaign, and called the Reporter last Thursday to emphasize that he recognized why the ad was a serious problem.

“That sign was the opposite of everything TD and I stand for,” Crandall said. Later, he let us know that a key person on his team who might have caught the ad before it was posted was away on vacation. “Still never should have happened,” he related.
Fair enough. Mistakes happen.

But what compounds the trouble for TD Bank, in particular, is the lack of a brick-and-mortar presence in Dorchester. Or Mattapan. Or Roxbury. Or Hyde Park.

TD Bank has been a relative bystander, even as these Boston neighborhoods are booming. What gives?

One of the advocacy groups that tracks the banking industry closely— and helps connect the institutions to lending opportunities for low-income homebuyers— is the Massachusetts Affordable Housing Alliance, or MAHA. Last Thursday, in the wake of the ad fiasco, MAHA’s president Tom Callahan sent a letter to TD Bank’s US president and CEO Greg Braca.

“Your bank’s racist and insulting ad underscores the need for TD to better understand Boston’s largest and most diverse neighborhood,” Callahan wrote. “And it is long past time for TD to address what is an obvious doughnut hole in the middle of Boston.”

Callahan invited Braca to visit MAHA’s headquarters on Dot Ave near Ashmont to “engage with our staff and members and discuss expanding TD’s presence in our vibrant community.”

It’s not yet clear if TD Bank’s brass will accept Callahan’s offer. They haven't yet and that is not a good sign. They should be rushing to MAHA's door.

Whether or not TD decides to branch into Dorchester or other neighboring communities, it should at least get its boots on the ground here to better understand the neighborhood that its ad team sought to make the hook of its ill-conceived branding. What the bank will see— just within a few blocks of MAHA’s offices— is a community that is booming. They would be lucky to get a slice of the market and contribute to the economic growth and dynamic civic scene.

In the meantime, quite bluntly, TD Bank should find a better ad team. And, for now at least, just keep the name of this neighborhood out of its mouth.

Bill Forry is the editor and publisher of the Dorchester Reporter.