Two trolleys headed outbound stopped in front of one of the disabled inbound trolleys on the tracks near Cedar Grove Cemetery. Maureen Forry photo

Operator error was to blame for a trolley collision last week on the Mattapan High Speed Trolley line that sent 16 to the hospital with minor injuries, MBTA officials said, adding that the route will run with fewer cars until repairs are completed.

The accident occurred on the tracks north of Butler Street inside Cedar Grove Cemetery just after 3 p.m. Friday. Boston Fire Department spokesman Steve MacDonald said that the two trolleys involved were headed inbound to Ashmont station when one rear-ended the other, sustaining front-end damage. Fire and transit officials were at the scene by about 3:15 p.m.

“Preliminarily, the collision that occurred appears to be due to operator error,” said Jeff Gonneville, the MBTA’s deputy general manager, in a statement on Saturday. “In accordance with standard procedures, the operator will remain out of service as the investigation proceeds,” the statement said. “The MBTA is currently assessing required repairs to the two trolleys involved in the collision.”

Emergency Medical Services treated victims at the scene for minor injuries – generally to the neck, back, and head. EMS officials tweeted that 17 patients were evaluated by medical professionals at the Cedar Grove site, with 16 transported to area hospitals.

MacDonald said that most of the injured parties were able to walk away from the site through the cemetery to receive medical care. Given the snow-covered slope between the trolley tracks and the cemetery, one passenger was brought to the ambulance by stretcher.

“Everyone’s been evacuated,” MacDonald said after the crash. “All but one person, who wanted to get checked out, walked to the ambulance.”

Uninjured passengers trekked back to the Butler Street station. And shuttles transported passengers in both directions along the line for the rest of the day.

“Due to the limited number of unique similar vehicles, until repairs are finalized, the Mattapan Line will run with four trolleys, rather than the normal set of five,” Gonneville said. “Customers should expect to wait during rush hour approximately 6 ½ minutes between trolleys rather than 5 minutes. The MBTA appreciates the patience of our customers as we work to restore regular service.”

The MBTA maintains a 10-car fleet of aging Presidents’ Conference Committee (PCC) cars that have been in service in the system since the mid-1940s. As some of the last such cars in the country, a trolley’s replacement parts need to be specially manufactured or restored using vintage components. The vehicles have been kept running via major repair projects in the 1980s and again in the early 2000s.

About $7.9 million was dedicated to keeping the current fleet operational and in good condition, the MBTA announced last February. An ongoing study of the Mattapan line is expected to conclude early this year.

The trolleys can be finicky in extreme weather, and there have been collisions on the line before. In November 2014, an out-of-service car rolled backward near Cedar Grove and collided with an inbound trolley, injuring seven people. 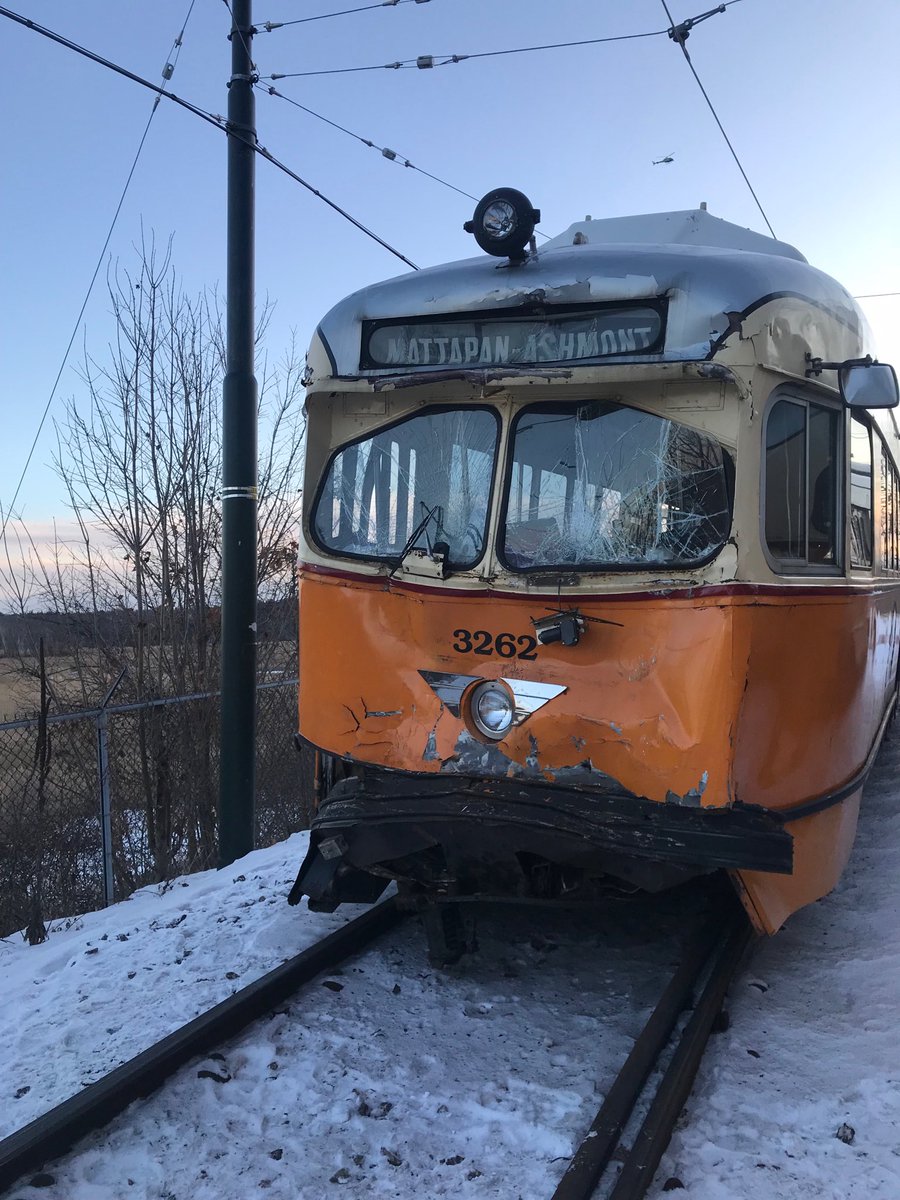