“Made in Dorchester” catches the eye first, as the words, set against a black background, sweep up and across stripes of violet, teal, pale greens, burnt orange, and goldenrod geometric shapes on a brightly colored wall mural. Then modern signage pulls the eye’s focus to the mural’s right, welcoming shoppers and residents alike into South Bay.

Even as construction crews bustle around concrete pillars and steel frames in the distance, the sprawling South Bay Town Center project is getting ready for the initial launch of a series that will wind up sometime in 2019.

The developer, EDENS, expects to finish the center’s first two buildings within the next two weeks, ushering in a round of national tenants and throwing open the doors to its showpiece AMC movie theater.

On Tuesday, EDENS managing director Brad Dumont and Keith Hague, vice president of construction and development, took the Reporter on a tour of the 11-acre site and its wide, pedestrian-friendly courtyards.

Both of the new buildings, which are the closest to the neighboring South Bay Mall and its sea of parking, will include ground floor retail and restaurant space. Retailers like Starbucks, Ulta, a LOFT outlet, Converse, Carter’s, J.P. Licks, a restaurant tenant (or two, or three) – the number still to be determined – will occupy the ground level of a six-story parking garage with five floors of 600 free parking spaces. Its white structure is set off with wooden detailing.

Across the new District Avenue, which connects the South Bay mall area to a new Boston Street bypass road and the top of West Howell Street, a 12-screen AMC cinema sits above a Forever 21, Nike, Chipotle, and Gyu-Kaku, a Japanese BBQ restaurant.

Ulta, LOFT, and Nike are looking to open over the next week. The spacious AMC — with its reclining seats, bar, and two IMAX theaters, one of which is tricked out with what look like thoroughly intense Dolby speakers —should open a week later, just in time for the latest Star Wars movie. The other stores will open on a rolling timeline into early 2018. 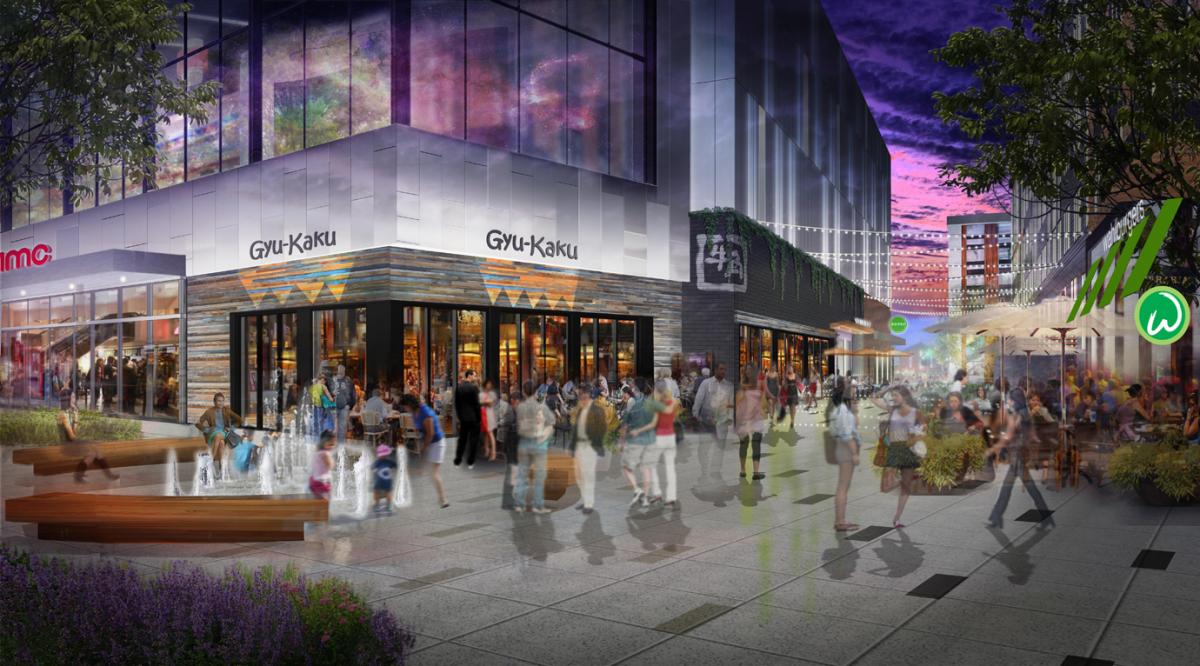 At the intersection of District Avenue and a new pedestrian promenade, there is a central gathering place with a splash fountain and wide street-level sidewalks.

“We’re really trying to make this feel like the heart of the project,” Dumont said. “So this is where the fountain will be with the kids, and on all four corners we want this to be food… and it’ll be all outdoor dining, so it’ll just feel like there’s a lot of energy here.”

A Wahlburger’s and MidiCi (Neapolitan pizza) will fill out the other two corner restaurant spots when the buildings are completed. The pedestrian promenade leads to the hotel areas, accessible to the neighborhood from West Howell Street and bedecked with string lights, where the developer hopes to feature an adjacent beer garden.

The South Bay Mall, 40 acres of land that the EDENS team has owned for the past 15 years, is getting some upgrades as well: a fresh top to the parking lot, new LED lighting, and better access to the nearby Newmarket commuter rail station.

Tenants in the mall have fairly secure long-term leases, Dumont said, so any potential change to a multi-story mixed-use vision for that space would be well down the line. “If we were ever to get access back, we’d love to redevelop some of those buildings,” Dumont said, “and do more vertically integrated, denser, urban type-development.”

All the mall signage will be renovated and redone over the next few weeks, as well, rebranding the whole site as one cohesive “South Bay.”

“Even though there hasn’t been a lot of large development going on Dorchester,” Dumont said, “one of the things that attracted us was just the household incomes and daytime population over a three-mile radius is just so large, and so dense that we just felt there was a huge void in the market that wasn’t being met.”

EDENS hopes the Town Center portion will energize the area as a communal hub. Its District Avenue is curb-less and can be shut down for events, festivals, or farmers markets within a “retail main street.”

About 475 residential units will sit above retail spaces in two buildings farther south, along a West Howell extension road, one of which will have public outdoor space and the other a private residential courtyard with a pool and outdoor programming space.

The residential structure will open next summer, Dumont said, and the six-story hotel will open in 2019 as the last leg of the project.

And the Dorchester names with hands on the project go beyond the flashy gateway mural, which is the handiwork of Meredith Kasabian and Josh Luke of Best Dressed Signs. They also worked on the signage for the Starbucks across the street. A bright sidewalk mural for stroller parking is credited to Cedric Douglas and Julia Roth of UP Truck.

On top of the 100 percent union job, Dumont said, his team wanted to let local residents embrace the space as a part of their neighborhood.

“We’re building this large project in Dorchester,” he said, “and although it needs to have certain national tenants to drive people here, to drive trips, and we want this to have the right mix, we also want this to be adopted by the community. We don’t want it to feel like it could be built anywhere, we want it to feel like it was really built in Dorchester and made by people who live here.”