A proposed five-story building would replace what is now a single-family house at 185-191 Geneva Ave. The apartment complex would include 27 units, of which four would be marketed as “affordable.” The BPDA will host a meeting on Feb. 27 to discuss the proposal.

A public meeting is planned for this month to discuss the latest proposal for new housing on Geneva Avenue. The project — dubbed “Bedrock Geneva”— will convert what is now a single-family homeon an oversized lot into a five-story building with 27 units of housing at 185-191 Geneva Ave., just steps away from the MBTA station in Four Corners.

The proponent is BT Geneva Development, which is led by Hiep Chu, a longtime civic presence in Fields Corner who also led the team that built a mixed-use project at the former Lucky Strike site on Adams Street.

Four of the units will be marketed as affordable housing, while 23 of the 27 units will be priced at market rate, according to documents filed with the Boston Planning and Development Agency (BPDA). 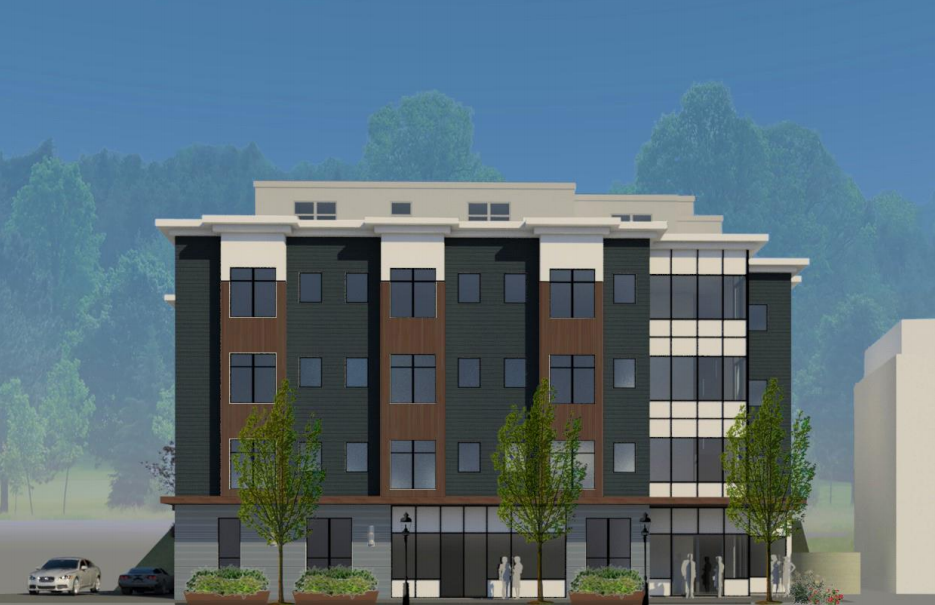 Chu said that the site’s proximity to public transit is a key element of the project.

“We got it a while back with a vision that we wanted to do a transit project,” said Chu. “A lot of people still need housing in the right location. If we had more projects like this near [T stops] we’d be able to house more people near public transport.”

The roughly 14,000 square-foot lot currently holds a two-story house situated towards the front of the property. The rear of the site is mainly made up of a wooded hillside. According to the proposal, the first two floors will be contained within the front part of the lot, while parts of the top three floors will extend out over the hillside. By taking advantage of underutilized space toward the back of the property, the apartment complex aims to be a more efficient use of space. And Chu says this design will be achieved with minimal destruction of the current landscape.

“We want to be respectful of the site, and build on it rather than blast rock and disturb the nature of the site,” he said.

The complex is intended to house a mix of families and young professionals, with the high number of studio and one-bedroom apartments designed in response to demands of the latter. Chu explained that the prevalence of three-deckers in Dorchester, originally designed as multi-family homes, means a dearth of smaller one-bedroom apartments.

“They’re hard to find,” he said. “With the demand of the younger population and couples with no kids, more studios and one-bedrooms would help.”

So far, the project has received community support with votes of approval from the Mount Bowdoin Betterment Association and the Greater Bowdoin/Geneva Neighborhood Association. Chu says that if approved, construction could begin on the project as early as May or June.

A previously scheduled Feb. 15 meeting to discuss the proposal was cancelled. The new meeting date is Tuesday, Feb. 27 at 6:30 p.m. at the Holland Community Center.