Mattapan resident and activist Lincoln Larmond supports the planned redevelopment of the vacant Cote Ford site on Cummins Highway in Mattapan. The property will be transformed into a 76-unit apartment complex with a community center and commercial space, the largest project of its kind in Mattapan in over a decade. Jesse Costa/WBUR photo

Listen to the WBUR coverage of this story here.

When Mattapan residents pass by the old Cote Ford dealership on Cummins Highway, some see a symbol of neglect – a boarded-up beige brick building with graffiti on the walls and weeds cracking through the pavement.

Now, more than three decades after the business closed, this key piece of local real estate is coming back to life.

“Cote Village, we believe, is a significant investment in the future of Mattapan,” said Lincoln Larmond, a housing advocate and co-chair of Mattapan United. “Historically there’s been a lot of disinvestment in Mattapan.” 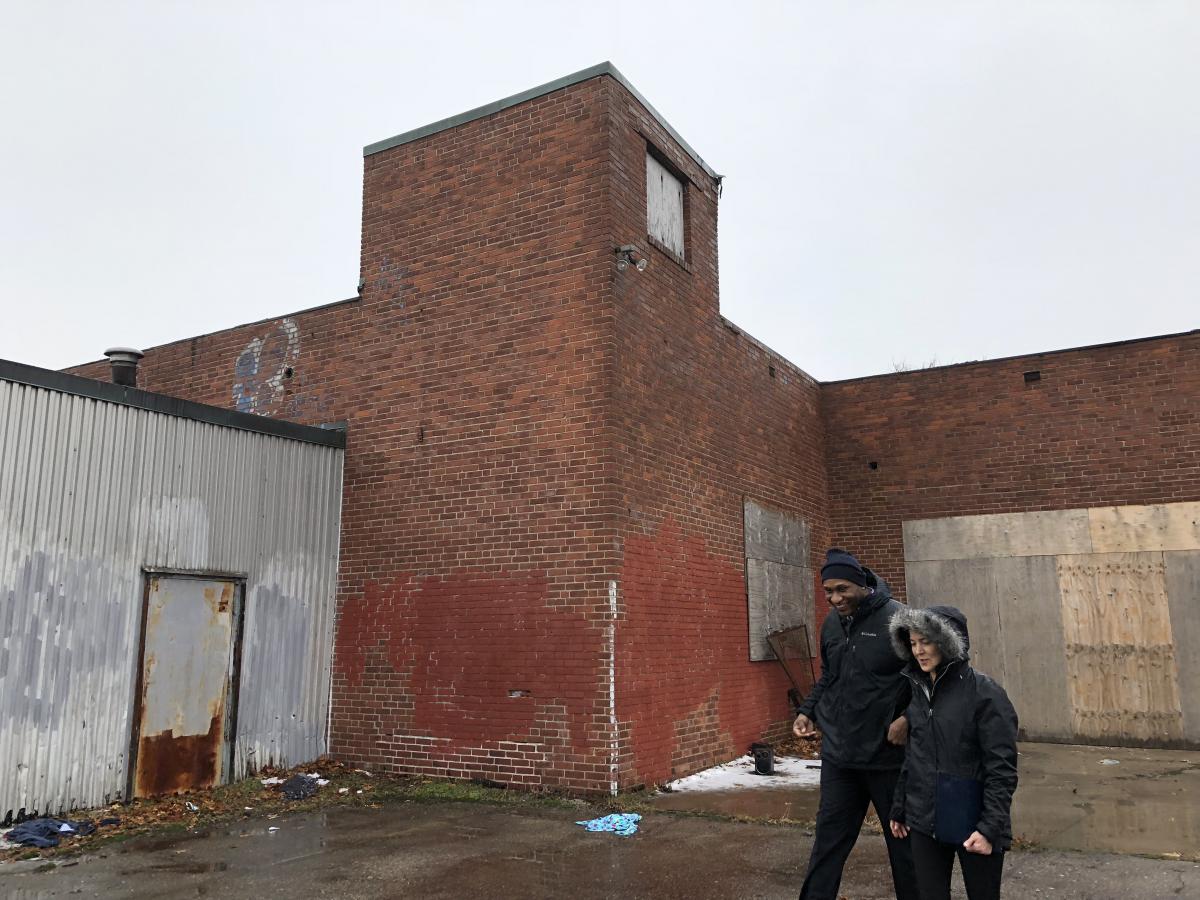 Donald Alexis of the Caribbean Integration Community Development and Lisa Alberghini of the Planning Office for Urban Affairs walked through the Cote Village site on Cummins Highway last month. The two organizations are partners in the re-development project, the largest of its kind in Mattapan in over a decade. Simon Rios/WBUR photo

The Cote property “had been vacant for 30 years, so that alone will demonstrate the fact that it’s been a long time coming,” he added.

Cote Village, a $28 million project, was the winning bidder in the city’s quest to develop the abandoned dealership site. While the derelict building is still in place this week, the plan is to build 76 apartments, set aside for families earning a range of incomes, as well as a community center and some commercial space. The developers say they are looking for a partner that will offer pre-teen services at the site.

The Village concept was proposed by the Caribbean Integration Community Development. The group’s Donald Alexis says the project spotlights the positives of Mattapan, which is something rarely captured on the evening news.

“This is a very great community,” he said. “There’s a lot of diversity, there’s a lot of great activities happening there, but people never talk about it. So we seek to create that catalyst to attract people from outside to come shop and dine here.”

Alexis notes that Cote Village will be the first housing development subsidized by federal tax credits in Mattapan since 2006. By comparison, federal records show that Dorchester has had nine such developments during the same period. 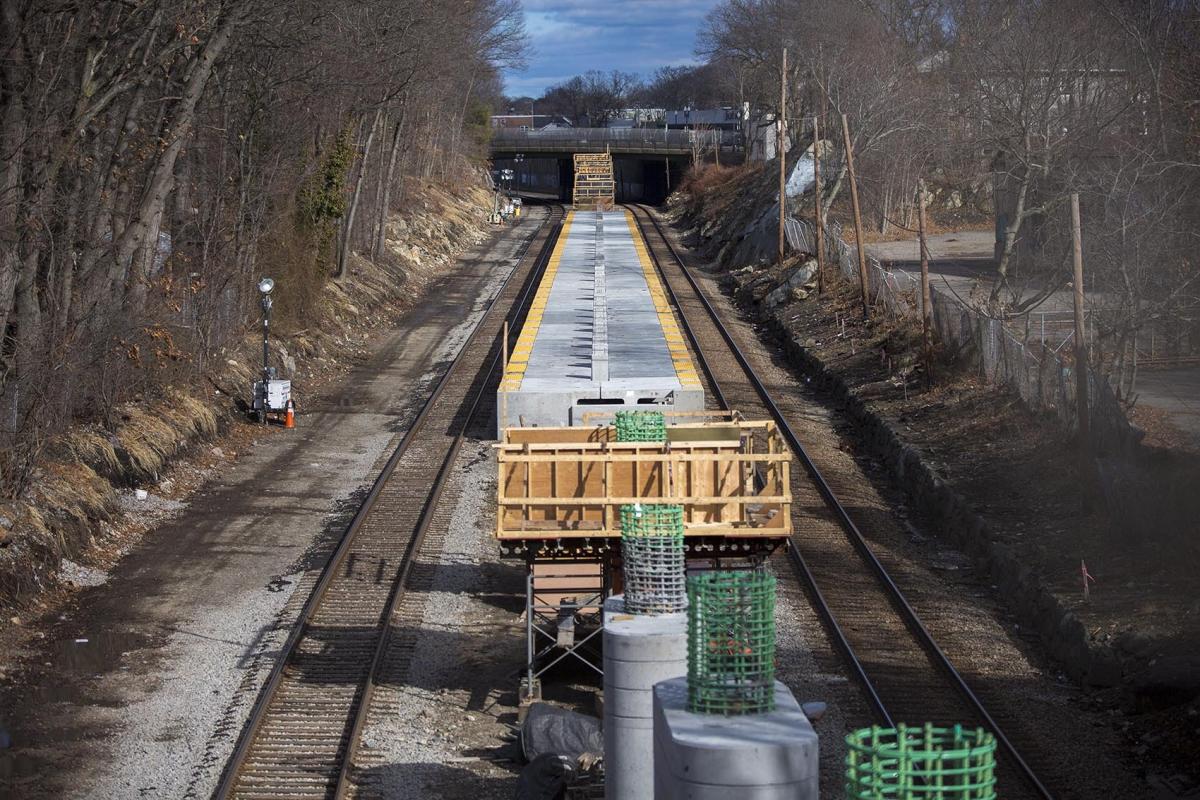 The platform for a new MBTA station on the Fairmount Line— Blue Hill Avenue station— is now under construction next to the Cote Ford site. The $17 million station helped to trigger the redevelopment of the Cote site in Mattapan. Jesse Costa photo/WBUR

Dorchester’s population is much larger, but there are fewer advocacy groups clamoring for housing dollars in Mattapan.

The Planning Office for Urban Affairs is the other developer behind Cote Village. The group’s president, Lisa Alberghini, said it’s clear there has been a lack of investment in Mattapan, but she sees the Village as evidence this is starting to change.

Groups like Mattapan United and Caribbean Integration Community Development are coalescing, she said, and that means “more opportunity for investment. There needs to be local leadership that’s giving the city and the commonwealth an opportunity to work with local partners to make this happen,” Alberghini added.

It has been said that a lack of investment has left Mattapan struggling to catch up with a booming Boston economy. The typical family in Mattapan — where more than 80 percent of the residents are of African descent — makes $10,000 dollars less than other Boston families, US Census figures show.

Mattapan wants change, but residents like Barbara Fields, an abutter to the Cote site and a longtime community advocate, want that change to benefit the locals first. They see gentrification in neighborhoods like East Boston and Roxbury as a cautionary tale.

Fields testified in favor of Cote Village at a city meeting. She hopes the development will strike a balance between development and a gentrification that leaves residents out in the cold. “Mattapan seems to be primed for development right now,” she said.

“We’re not opposed to development and moving forward, but we do not want just any kind of development,” she added. “And we don’t want to change the positive things about Mattapan… the fact that we have trees and there is land.” 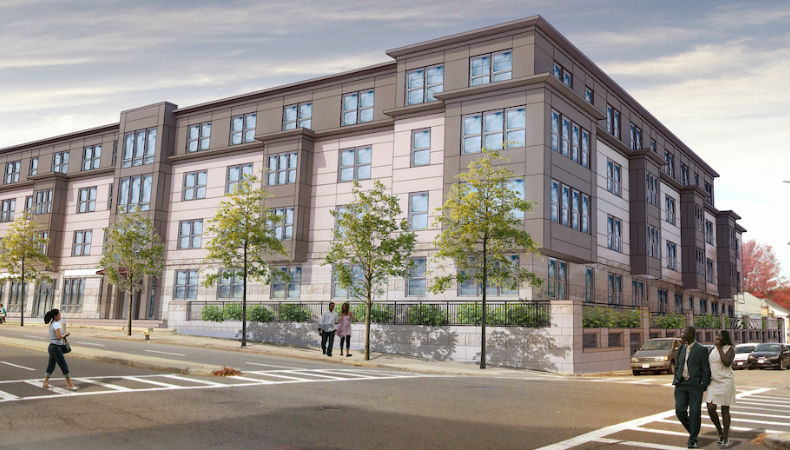 Above, a rendering shows the planned Cote Village building after completion. BPDA image

Fields wants less density, and she has opposed other proposals for the Cote site that envisioned more apartments than the 76 units in store for Cote Village. She also was against the new Blue Hill Avenue MBTA commuter rail station that is being built behind her house. The station on the Fairmount Line, which is scheduled to open next year, represents a $17 million investment by the state and it helped to trigger the redevelopment of the Cote property nearby.

Home values in Mattapan are a third less than the rest of Boston, but Fields said something strange is starting to happen. Calls are coming in from people looking to buy homes in the neighborhood — even pressuring her to sell.

Fields doesn’t like what that says about the direction Mattapan is headed. 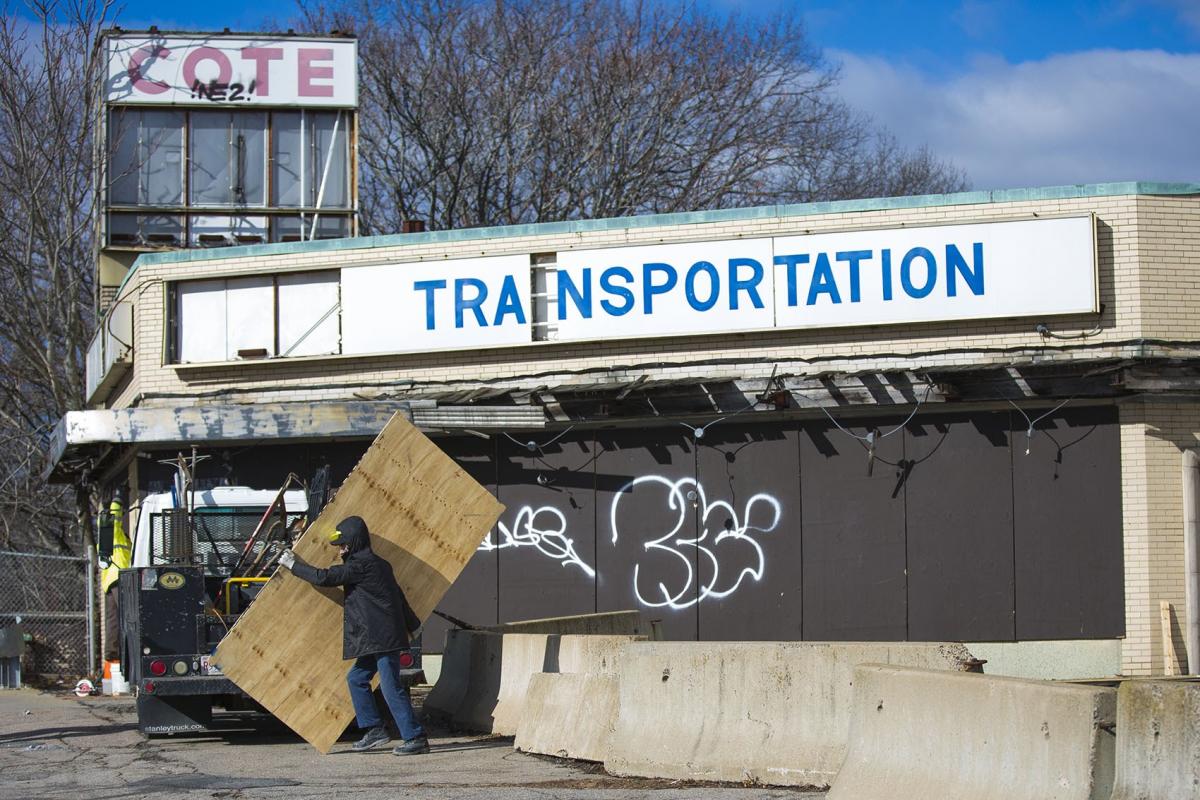 Above, workers were seen in action at the Cote Ford site on Cummins Highway last week. Jesse Costa/WBUR photo

“The times right now seem to be moving in the benefit of those who want to gentrify for financial purposes,” she said. “And so I think we have to be vigilant and stay on top of it so that the neighborhood does not get hurt by this.”

Fields noted that she’ is disappointed that a planned collaboration between the developers of Cote Village and the Boys & Girls Club of Boston, which was part of the original pitch to the residents, has fallen through. The club was considering establishing a presence on the Cote site, but the sides said they were unable to reach an agreement. Fields says that she might not have voiced public support for the project without the youth center's involvement.

Developers hope to begin construction on Cote Village in the summer, and open 15 months after that.

The Reporter and WBUR 90.9FM, Boston’s NPR News Station, have a partnership in which the news organizations share resources to collaborate on stories. Simón Rios is a WBUR reporter who is currently working from the Dorchester Reporter newsroom. He may be reached at srios@wbur.org.