"Opportunity Zones"— highlighted in blue— have been created in a new federal tax law passed in 2017. The zones were chosen by city and state officials. Commonwealth of Massachusetts graphic

A new federal tax-deferment program intended to spur economic growth in select low-income neighborhoods across the country will launch in the new year. The Internal Revenue Service (IRS) will offer qualified investors significant tax breaks on capital gains over the next decade if they buy and develop property in specific census tracts— dubbed “Opportunity Zones.”

Advocates for the federal initiative— which has enjoyed rare bipartisan support in a fractured Washington— say it could be significant in communities that have lagged behind the current phase of economic growth here and nationally. Skeptics say the tax benefits may be more of a “sweetener” with only marginal impacts in high-cost cities like Boston.

Whatever the potency of the tax incentive, in Boston’s neighborhoods they will be contained to just 13 census tracts, including Dorchester’s Columbia Point peninsula, the Boston Harbor Islands, and sections to the west of the Blue Hill Avenue corridor that include lands largely off the table for redevelopment, including Franklin Park and four large cemeteries.

City of Boston officials were asked to pick the zones last spring by the Baker administration. With but a few weeks to make nominations, Mayor Walsh’s team of economic and housing advisors opted to limit the scope to just a handful of areas that include public housing developments and— in some cases— parks, cemeteries, and open space that cannot be purchased or re-developed. The city could have nominated up to 20 percent of income-eligible census tracts for the program.

The decision to limit the number to 13 reflects the Walsh administration’s apprehensions about unleashing a wave of new private investment dollars into sections of the city already beset by concerns about displacement and gentrification.

“Initially, when the state asked us to nominate these census tracts, our foremost concern was the potential for Opportunity Zones to further fan the flames of gentrification in our neighborhoods,” said Andrew Grace, the director of Economic and Strategic Planning for the Mayor’s Office of Economic Development.

But, at least one Boston leader thinks that the city may have miscalculated in its conservative approach. The scarcity of zones in Boston is a missed chance to spur investment, says City Council President Andrea Campbell. She said she was “shocked” to find that there were no census tracts selected from Mattapan, which includes much of her District 4 constituency, and worried that the communities could be locked out from adding tracts for the decade-long duration of the legislation.

“We have completely missed the opportunity when it comes to Opportunity Zones and I’m still waiting on responses from the administration as to why certain areas were selected and others were not,” Campbell told the Reporter in an interview last week.

A scramble to respond to a federal timeline
Across the United States, 8,700 rural, urban, and suburban Opportunity Zones have been identified, individual census tracts that were approved in a fast-paced process that leaned heavily on the governor of each state for recommendations. In April, Gov. Baker nominated 138 census tracts for designation and the US Treasury accepted and certified them in May. Many of the Massachusetts zones are concentrated in so-called Gateway Cities— Springfield, Lawrence, Lowell, Haverhill— where land is more readily available at lower cost than in the capital city.

Boston officials were tasked with making their recommendations to Baker’s office within a three-week span in March. The nominated Boston tracts had “significant public ownership or control,” said Grace— including public housing developments like the Mary Ellen McCormack Development in South Boston, which sits in one of the 13 city zones.

Other sub-neighborhoods— including Uphams Corner, for example, where the city is currently engaged in a community process aimed at revitalizing the business district— were considered for nomination. However, it was deemed by city officials to be “too risky,” given the lack of clear guidelines from federal authorities about how the new incentive program would work and absent “assurances that it’s not going to displace residents,” according to Grace.

“We’ve been invested in Uphams Corner, working closely with our community partners including DSNI to create development without displacement.  We were concerned about including it given the absence of guidance and details,” he said.

Columbia Point was picked because it met the income requirements, includes a mix of existing housing— notably the mixed-income Harbor Point development— and is heavily controlled by state and city interests, including UMass and the Boston Public School system. The 20-acre Bayside Expo parcel— which UMass is now marketing to private developers in a deal that could potentially yield $200 million for the university— is located squarely in the census tract and was central to the city’s calculus. 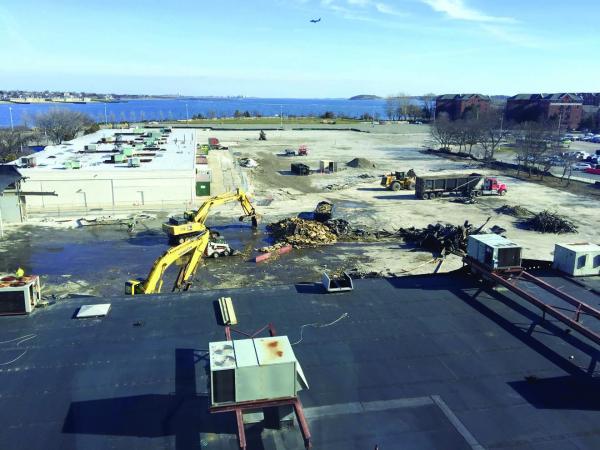 The former Bayside Expo site— now controlled by UMass— sits in one of the 13 Opportunity Zones in Boston. Reporter file photo

The Opportunity Zone program was added to the federal tax code last December. Under the law, investors who buy and develop property in the zones can defer tax on almost all capital gains invested from now until 2026 by using an investment vehicle known as a Qualified Opportunity Fund (QOF). It is a good deal, at least in theory, particularly for those willing to keep their funds in an Opportunity Fund for 10 years, earning total exemption from any capital gains tax on the investment. How the model will work in practice, however, remains to be seen.

On Wednesday, the state’s Office of Housing and Economic Development was set to host an all-day conference at UMass Lowell to discuss “emerging investment strategies and how communities can maximize opportunity zone impact.” The event— billed as a networking opportunity with “investors, elected officials, developers, and municipal leaders – was advertised as “free” by the agency.

“Massachusetts worked extensively with our municipal leaders and other stakeholders to nominate, and receive federal approval for, 138 Opportunity Zones from Pittsfield to Provincetown,” said Jay Ash, the state’s Secretary of Housing and Economic Development in a statement to the Reporter. “We look forward to continuing this active dialogue to maximize the impact of the program, attract private investment, and spur additional growth throughout the Commonwealth.”

Meanwhile, Council President Campbell continues to press for an explanation of why city officials did not engage her or her constituents in a discussion before making nominations for the zones.

“Zero census tracts in Mattapan,” Campbell emphasized to the Reporter. “Which, if you look at the demographics and the criteria, [the zones were intended for] those communities that were under-resourced or where you could not get investors to look twice.”

She is particularly concerned that public housing developments in Dorchester were not included. “I have public housing [BHA] buildings in my district— Franklin Field, Franklin South —that need investment and haven’t had investment for decades. Why weren’t they designated? And I’m still waiting on a response.”