One of the easiest ways to grasp the extent of Michael Besson’s passion and intensity is to watch him play the guitar. His fingers a blur, he strums and picks the guitar strings at such speeds that they twang plaintively and seem likely to snap from the force.

The muscles on his forearm bulge and the tendons in his neck strain as concentration contorts his face into a joyful grimace. He plays so fast that family members have dubbed him “Lightning Fingers.”

Last Thursday evening, Besson was seated in his living room in Dorchester, performing amid Christmas decorations as his wife Nalida looked on. After concluding the first song with a flourish of his wrist, he looked up with a bashful smile.
“I’m not warmed up yet,” he said apologetically.

A Haitian native, the 57-year-old Besson has played the guitar since learning at the age of five in his native country of Haiti. Born blind, he spent much of his childhood fleeing from bullies who would taunt and chase him on his way to school. Guitar offered an escape, a reason to stay inside and dedicate hours to mastering a craft.

Today, painful memories of being ostracized for his disability have inspired Besson to become a champion for change: In April, he will run the 2019 Boston Marathon in support of The Play Brigade, a Chestnut Hill-based organization dedicated to inclusion in sports and recreation for children with disabilities.

Dawn Oates, founder of The Play Brigade, told The Reporter that she crossed paths with Besson in a serendipitous meeting earlier this year.

“When I met him he told me, ‘My dream is to run the Boston Marathon.’ I said, ‘Let me help your dream come true,’” said Oates.

Soon after, in October, Besson completed The Play Brigade’s 5k benefit race, and now he is training for the marathon with the help of the Marathon Coalition, a team that helps charity runners prepare for the race, and Achilles International, an organization specializing in the training of athletes with disabilities.

Michael Besson of Dorchester, who is training to run in the BAA Boston Marathon next year, runs along the reservoir in Chestnut Hill with his coach, Rick Muhr. Besson, 57, was born blind in his native Haiti. Photo courtesy Nalida Besson

He trains on a strictly regimented schedule with the help of volunteer guides who direct him on his runs. He is attached to a tether with a guide beside him to help navigate crosswalks and potholes. As he gradually increases the pace and length of his runs, the training program will bring him closer and closer to a marathon level of fitness.

That milestone will represent the culmination of a long personal journey for Besson, who struggled with obesity for much of his life. Overweight as a teenager, he continued to gain weight after moving to Boston in 1985. Hampered by depression and lacking purpose or motivation, he watched his weight rise to as high as 500 pounds before the recognition of health risks drove him to change his lifestyle and switch to a plant-based diet.

Now, he’s down to 180 pounds and determined to fulfill a dream that once appeared out of reach. The remarkable physical transformation coincided with a mental one, he said.

“The difference is now I have a discipline. If I say I can do something, I have a strategy already. Because if you don’t try, you don’t know if you can,” he said.

Besson compares his all-out, dedicated approach to running with his passion for music. In applying the same intensity with which he plays and practices the guitar to his endurance training, he aims to push the boundaries of self-improvement.
“As a musician, you want to practice to get better, to get faster,” he explained. “If I have a weakness, I know my weakness, so I’m never satisfied. I just say: Nobody can stop me.”

Besson’s drive is matched by that of his coach, Rick Muhr of the Marathon Coalition. An expert in endurance running and motivational psychology, Muhr has been at the forefront of marathon training for decades. But he has never had a protege like Besson.

“I’ve done this for over 23 years, coaching over 20,000 runners, and Michael is one of the most positive runners I’ve ever coached,” he said. “He’s extremely committed to the training, he’s positive, he’s willing to learn, he’s grateful for advice...and he’s truly a student of running; he’s like a sponge.”

Under Muhr’s guidance, Besson has begun studying Kenyan running techniques, modeling an approach that features short, light steps in an effort to increase economy and efficiency.

“He’s a source of inspiration to me,” said Muhr. “Watching him just makes me more determined to give back to others...he’s a testament to the power of the human spirit. I always say that there’s nothing stronger than the human spirit, especially when it’s tested. Michael’s proof of that.”

Dawn Oates agrees. For her, helping Besson achieve his dream perfectly captures the mission of her organization. “He represents what we’re all about,” she said. “By running, he’s helping us share our mission with everybody that comes in contact with him or with us.”

Oates founded The Play Brigade after her daughter, Harper, suffered a spinal injury when she was born by C-section that left her quadriplegic. Oates saw how her daughter struggled to make friends, simply because she couldn’t do the things that other kids could. As a result, she joined the front lines of the inclusion movement, starting by petitioning for a handicap swing for her daughter at a neighborhood park. 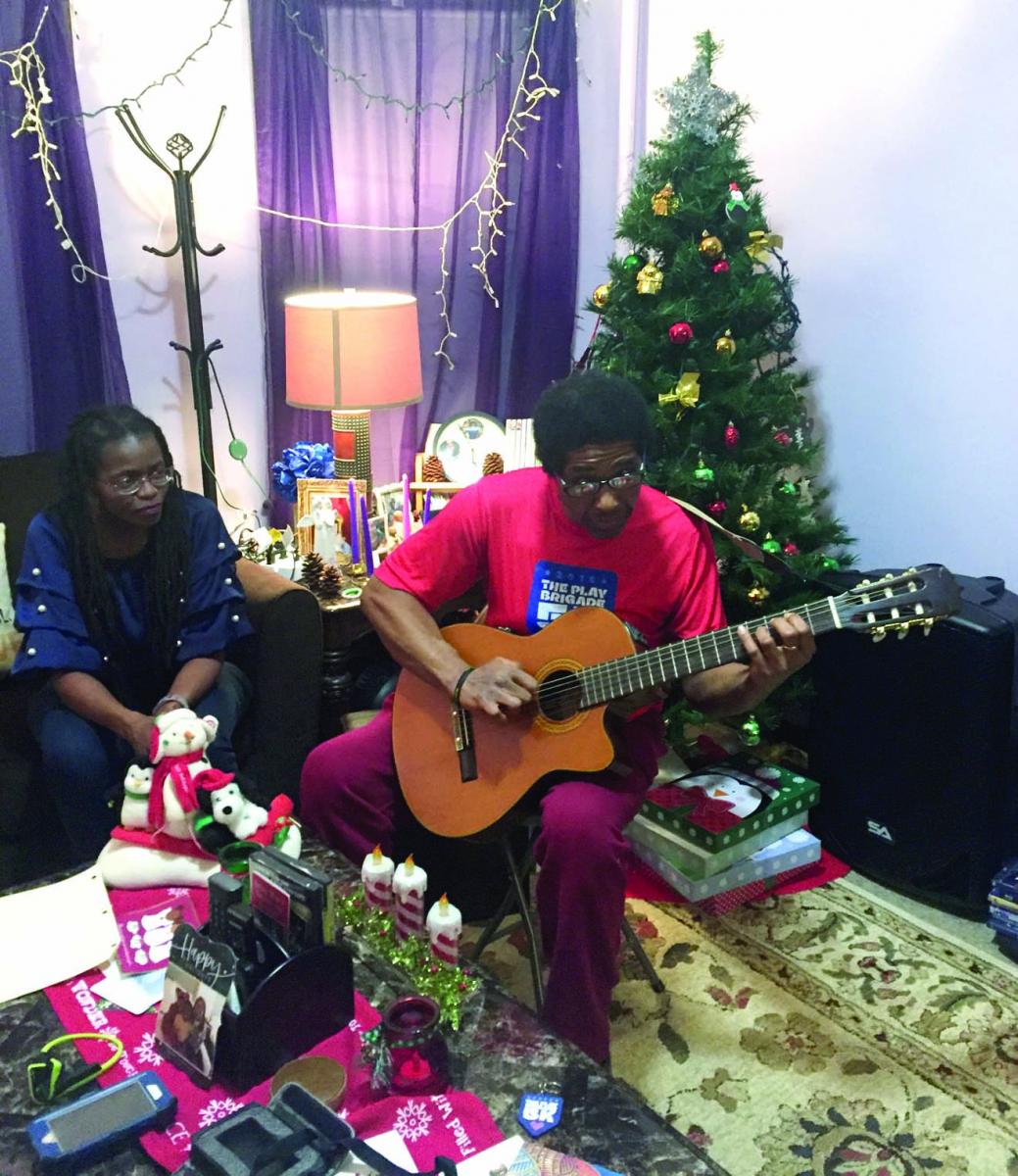 Michael Besson played guitar in his Dorchester living room as his wife Nalida looked on last week. He learned to play the instrument as a child in his native Haiti. Daniel Sheehan photo

“I quickly realized that this is more than just in my backyard,” said Dawn. “There are people all over the country who live with disabilities, who are alienated, marginalized, and excluded.”

While widespread structural changes like handicap-accessible ramps are necessary, Oates points out that accessibility does not necessarily mean inclusion.

“There’s a growing conversation about handicap accessibility, but there are not a lot of organizations that focus on play, sports, and fun - things that without them, you know, what’s life if you can’t have fun?”

She added that conversations about inclusion and diversity can go hand in hand. “Equity means that she doesn’t have to be able to use the exact same equipment, but there has to be a play option for her. And that’s part of that diversity conversation, celebrating experiences with each other.”

With Oates’s vision, The Play Brigade has used its influence in recent years to raise funds and educate community leaders about the importance of inclusion. Recently, it played a role in the movement to have Wall Street’s famed “Fearless Girl” statue relocated and made handicap-accessible. And for the last several years, the organization has sponsored an inclusive team --one featuring athletes with disabilities - to run the Boston Marathon. She said that by continuing that trend, Besson is helping to change the way people think about disabilities.

“The idea of running a marathon is both literally and figuratively a fantastic challenge,” she said. “You watch it because you hope to see people have this amazing accomplishment, and then you take that idea of a marathoner and you kind of shift the lens a little bit and you add an unexpected piece to it – “I woke up paralyzed, I was born blind.”

When people see something that they don’t expect to see, that is an educational experience for people, it’s an ‘aha’ moment.”

Through a crowd-funding page, Besson has set a goal to raise $7,500 for The Play Brigade by April. To date, community donations have totaled nearly $1,500. He says he’s looking forward to crossing the finish line with the nonprofit’s name emblazoned on his shirt.

“It feels good to help the organization,” said Besson. “They do something very extraordinary...I feel like The Play Brigade has opened the door for every person with disabilities.”

As a child, Besson often had to face his bullies alone. But now, with a team of supporters around him, he’s just a few months away from achieving a dream that once seemed impossible. For that chance, he is grateful.

“If you don’t have the people to push you, you don’t know what potential you have,” he said.

You can donate to Michael’s cause and support The Play Brigade here.