It’s expected that a developer will be selected early this year who will transform the former expo center site into a harbor-front village.

Dorchester and Mattapan had a year packed with political shakeups and development proposals. Here is a look back at some of the biggest and most notable stories of the year 2018 and a peek ahead at the stories we will be watching in the new year:

A political shockwave hit Massachusetts last year, with progressive, diverse, and first-time candidates coming out on top of competitive primary races even as the statewide general elections shook out in fairly predictable form.

City Councillor At-Large Ayanna Pressley unseated 10-term incumbent Congressman Michael Capuano in dramatic fashion, coming out on top of a hard-fought primary by 17 points. Pressley had served on the council since winning election in 2009, championing causes often centered on equity like trauma supports and liquor license reform. The first woman of color elected to the council — and now the first woman of color to represent the state in Congress — Pressley joins a cohort of progressive freshman representatives already pushing for equity policies.

What to watch: Pressley and other Democrats are pursuing a “Green New Deal” in preparation for the impacts of a changing climate, and the new congresswoman says she is focusing on elevating topics like gun control and securing reproductive health protections. But first they have a government shutdown to address. 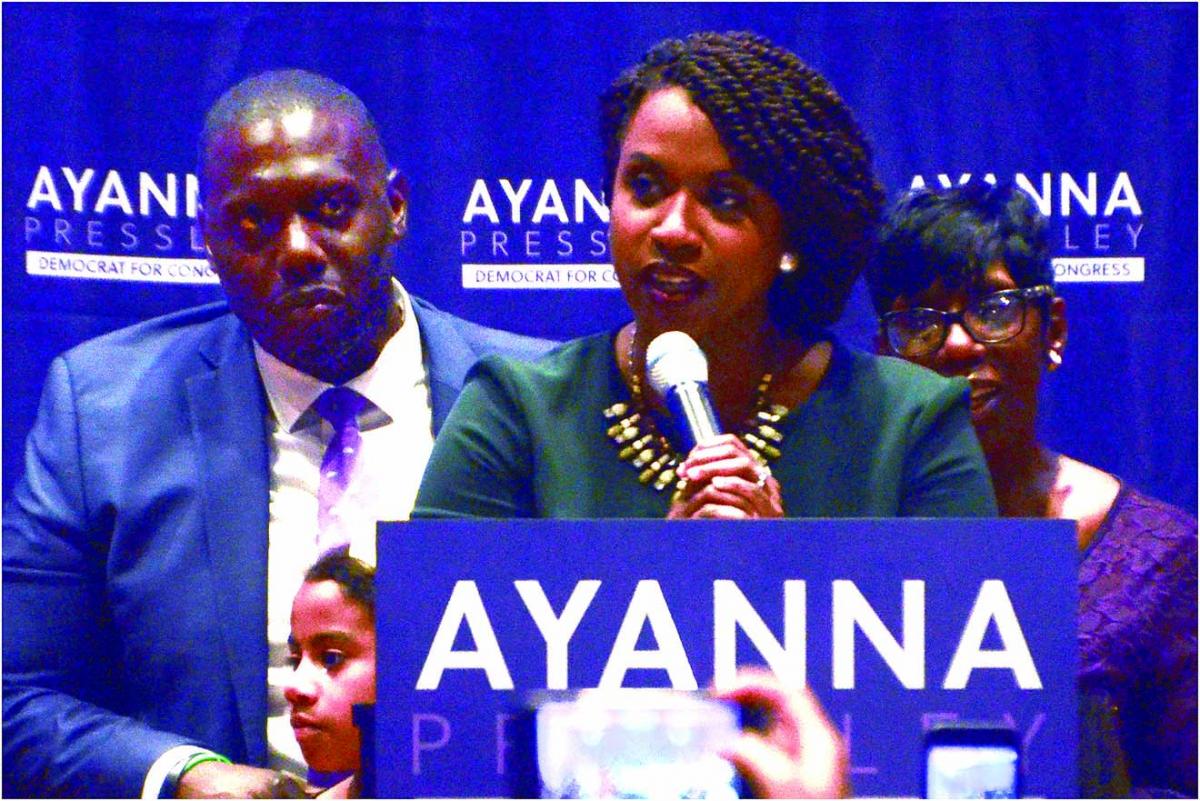 Congresswoman-elect Ayanna Pressley is shown with her family as she spoke to supporters after winning a decisive primary election victory last September at the IBEW Hall in Dorchester. Chris Lovett photo

What to watch: Rollins, the first person of color to serve as Suffolk District Attorney, pledged that her office will better reflect the communities that it serves. She is still getting pushback over a “decline to prosecute” list of 15 crimes that she characterizes as being rooted in desperation and needs, better suited for redress outside of incarceration. She has said that although her office will work closely with the police department, she is prepared to hold the police accountable for instances of systemic or specific misconduct. What that looks like, and the composition of her office, will become more apparent after she is sworn in.

Carvalho’s decision not to run again for his current seat, in favor of the DA post, left an opening in the Fifth Suffolk District. Dorchester and Roxbury natives Darrin Howell and Liz Miranda sought the post, with Miranda emerging victorious in the primary and winning every precinct in the district. She also defeated former state Rep. Althea Garrison in the general election, although fifth-place at-large finisher in the 2017 city council race Garrison will slide onto the council for the remainder of Pressley’s term.

What to watch: Pressley’s departure is bringing forth a flock of potential candidates for at-large, a pack expected to grow throughout the year. In a non-mayoral year, the only game in town is the city council, leaving the three remaining at-large incumbents — Michelle Wu, Michael Flaherty, and Annissa Essaibi-George — to defend their seats. District councillors Mark Ciommo, Josh Zakim, and Tim McCarthy are also facing challengers in their re-election campaigns.

Gov. Charlie Baker and Sen. Elizabeth Warren both sailed back into office in the general election, as did the entire statewide Democratic slate outside of the executive branch. While incumbent Democrats like Attorney General Maura Healey and Secretary of State William Galvin fended off Republican challengers, gubernatorial hopeful Jay Gonzalez was unable to overcome Baker’s immense popularity and lost to the governor by 33-points statewide. Although Baker carried only 14 of 55 Dorchester precincts, his losing margins were narrow even in some precincts that went overwhelmingly for Warren.

What to watch: Warren is poised to run for president in 2020, having just opened an exploratory committee this week. She is a polarizing but popular figure in the state. The question for Baker is how or if he decides to expend his political capital, as eyes turn to other statewide elected officials to see if he may face a potential challenger in his next run.

The city is growing and the waters are rising. Last year highlighted the need for long-term planning efforts around climate preparedness, infrastructure, and development. Boston’s coastal position makes it extremely vulnerable to the impacts of climate change, a Climate Ready Boston report asserted, and focused neighborhood initiatives are either under way or coming down the pike to address area-specific concerns. In Dorchester, much of the coastal resiliency rests on state-controlled land like Morrissey Boulevard and the Neponset Greenway.

What to watch: The long-awaited Morrissey redesign project stalled out last year after the mayor voiced concern about a proposed lane reduction and sent the project back to the neighborhoods for further review. State planners have been reconvening to incorporate feedback and expect design meetings to resume in 2019.

In Port Norfolk, pushback on a large residential proposal for the tip of the small peninsula sent Neponset Wharf developers back to the design stage. Boston Planning and Development Agency project managers are holding meetings on the type of project neighbors would like to see for the Port and surrounding parcels in flux.

At the northern edge of Dorchester’s coastline, UMass Boston and the university system’s development arm are looking forward to a windfall deal on the 20-acre Bayside Expo site. At year’s end, a decision on what private developer might partner with UMass on the site was considered imminent.

What to watch: On the UMass campus front, interim chancellor Katherine Newman was selected to take the helm after a search for a permanent chancellor ended in turmoil. Whether or not that picks up again in the new year —or if the campus settles into Newman’s long-term stewardship— is an open question, especially with ambitious master planning projects wrapping up in the next year amid ongoing rankling about parking fee hikes that protesting faculty and students feel are untenable and unfair. Newman has also prioritized revitalizing and reusing the historic Calf Pasture Pump Station and finding a home for the campus’s successful nursing school.

On the Bayside front, there should be a developer selected in early 2019 to transform the former expo center site into a harbor-front village. Its connection to the neighboring Columbia Point and interaction with UMass Boston itself will be the subjects of meetings after the partner-developer is announced. 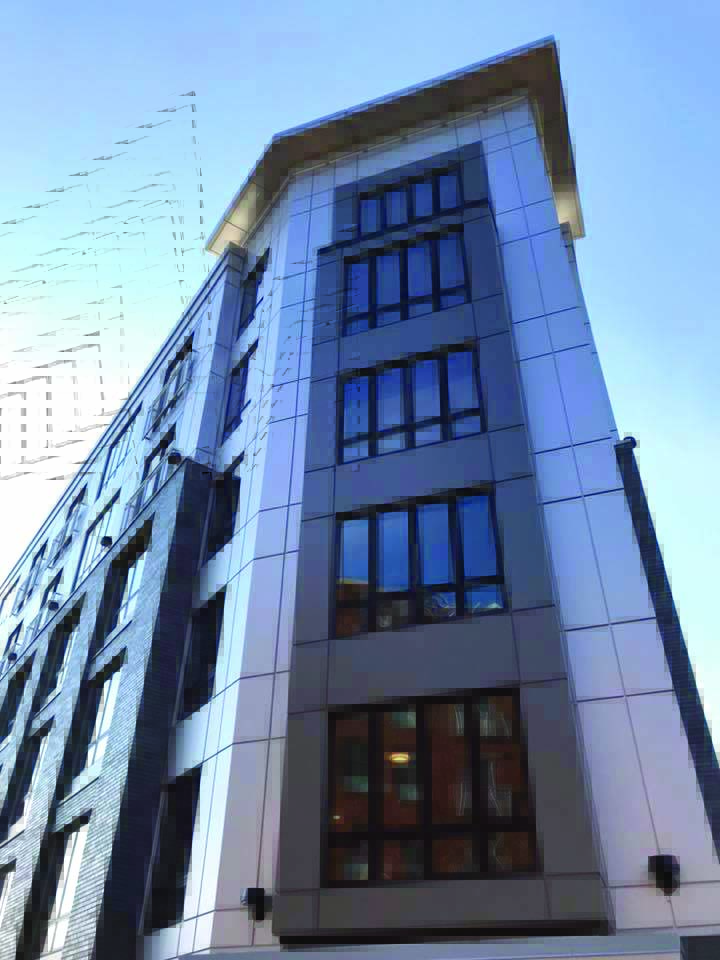 The Treadmark 2.0 building on Dorchester Avenue was rebuilt last year after it was nearly destroyed by fire in June 2017. Photo courtesy Trinity Financial

After a year of rebuilding, the Treadmark Building at Ashmont is now occupied. A fire in July 2017 roared through the top floors and necessitated demolition of the structure down to its concrete base. The second iteration of the Trinity Financial-owned building was completed just before the holidays and its first residents moved in.

What to watch: Deep into 2018, people were still skittish about the prospect of new wood-framed construction like the South Bay Town Center residences. Conversations around construction type and appropriate density will likely pop up as larger condo and rental projects continue to move through the neighborhoods. These projects increasingly incorporate ground-floor commercial amenities and associated housing. This is true at the present site of Tom English’s Bar and Dorchester Market site, the 500 Talbot project which would include church and retail space underneath new residences, the controversial Washington Street proposal in Lower Mills on the site of an old funeral home, and the redesigned Dot Block project, which will drop hundreds of units and expanded green space above underground parking in Glover’s Corner.

City planning to re-envision a largely industrial swath of Glover’s Corner is ongoing, with push and pull between affordability advocates and the need to accommodate market pressures. An Uphams Corner-centered revitalization process is poised to create a pilot arts and innovation district complete with an $18 million new library.

What to watch: A new planning effort has kicked off in Mattapan, centered around Mattapan Square. Keep an eye on several new projects and transit matters in the neighborhood: a forthcoming official Mattapan High-Speed Trolley study, a new Fairmount Line station on Blue Hill Avenue, major residential developments at a underused MBTA parking lot by the trolley terminal and the old Cote Ford site, and two potential marijuana shops along Blue Hill Avenue that are already the subjects of packed meetings.

Ramifications of a chaotic national politics scene continue to seep into local communities. City and state government was already on edge at the prospect of reduced federal block grant funding— which ultimately did not come to pass— and aggressive moves to regulate immigrant populations.

The Trump administration signaled its intent to end Temporary Protected Status for Haitians in the US last February, which caused an outcry from a diaspora that felt unable to return to a country still struggling from a deadly 2010 earthquake and political uncertainty. Lawsuits against the administration regarding the TPS executive order are moving forward gradually. Another group, southeast Asians, has been feeling the pressure for the past year, and the administration again indicated its desire to renegotiate an agreement between Vietnam and the US that would allow for certain Vietnam War refugees to be deported.

What to watch: Vietnamese residents or Dorchester say the policy push is leaving a pall of uncertainty over their community, the largest Vietnamese diaspora in the state. They are waiting for any additional news about who might be impacted, but note that deportations are already taking place. This comes at the same time as local Vietnamese seek to reaffirm their cultural home in Fields Corner by fine-tuning an application to create a cultural overlay district they hope will be called “Little Saigon.”

An under-the-radar component of the 2017 Republican-backed tax plan asked states to designate Opportunity Zones that come with hefty tax advantages to developers looking to build in lower-income areas. Boston designated 13 zones, including Columbia Point, the Harbor Islands, and portions of Franklin Park and nearby cemeteries.

What to watch: Both the Bayside site on Columbia Point and the massive Mary Ellen McCormack development in South Boston — already slated for expansion— are in Opportunity Zones. How developers take advantage of those potential tax benefits— and whether the city makes moves to encourage responsible development in areas like Mattapan, which were not selected as zones— will be closely watched in 2019.

What did we miss, and what are you watching? Jennifer Smith can be reached by email at jennifer.smith@dotnews.com or on Twitter
@JennDotSmith.