About 40 people—mothers, children, seniors, recent college graduates—crammed into a meeting room in Fowler Clark Epstein Farm farmhouse on Norfolk Street last Saturday afternoon for a workshop on growing food at home with limited space, one of a number of initiatives sponsored by the Urban Farming Institute of Boston, which now operates the meticulously-restored landmark in Mattapan.

Some were seasoned growers, having sown and reaped in their backyards; some have grown something but have problems that need answering; and some were complete novices.

Nataka Crayton, operations manager at the institute, and Bobby Walker, a training manager, taught the ABCs of growing fruits, vegetables, and herbs in pots, buckets, wood containers, and raised garden beds. No space is too small; a window sill, a balcony or a porch can all be spaces for growing.

From testing soil to choosing plants that grow together, the lecture touched on all aspects of the growing art. Questions were raised, and experiences were eagerly shared.

After a tour around the site, participants got their hands dirty, putting soil and compost in trays, seeding, potting chives, and shoveling woodchips and cardboards for a mushroom bed. 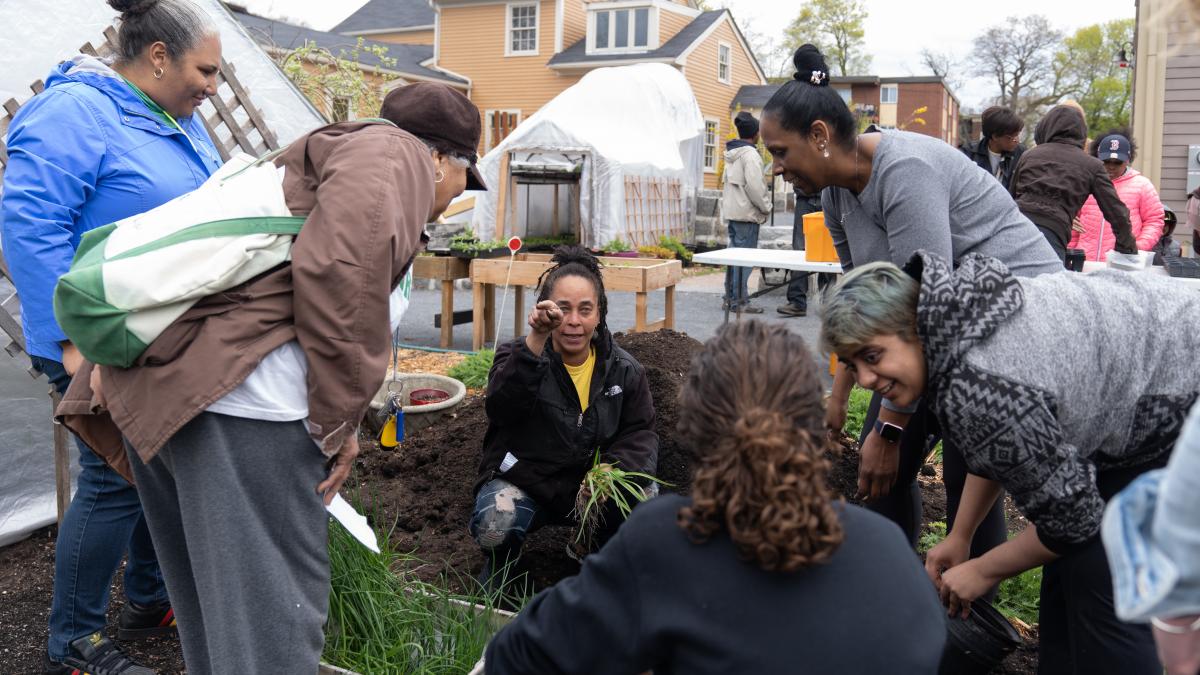 “My children eat a lot of fruits and vegetables, and as a single parent with no help at all, I can’t really afford to always buy the healthier options,” said Donaqui Garcia, who brought her daughter and son to the workshop.

Garcia said that produce in city food pantries is often not fresh, and she wants to save and grow at home the foods they eat the most, including onions, peppers, tomatoes, corns and fruits. The workshop, she said, increased her knowledge by “about 60 percent,” and she will bring her children back to keep learning at the farm.

Denise Lucien, a Mattapan senior who comes to the institute every Thursday for exercise and cooking classes, said the flowers she buys and plants in her backyard always die, and she’s here to find out what she can do.

“Call me. I grow flowers and make flower arrangements… If you need flowers, let me know,” said Sabrina Pilet-Jones, a part-time farmer at the institute said after hearing Lucien’s problem.

“Apparently everybody who works here really wants to share everything that they know for free, which is awesome,” said Gabby, a young Roxbury resident.

Norma Eason, a retired public school teacher who lives in Mattapan, said she came to learn about setting up raised beds to grow cucumbers, tomatoes, squashes, lettuces—“things that you can make a salad with.” She added, “We really need to know where our foods come from, not just getting them from the supermarket.”