Cousin Stizz in his hometown neighborhood of Fields Corner, which plays a role in his award-winning short film "Trying to Find My Next Thrill."

Fields Corner has much to celebrate following last week’s Boston Music Awards: Dorchester Art Project, the community-driven art space on Dorchester Avenue, took home a prize for Best Intimate Live Music Venue, while the Fields Corner-bred rapper Cousin Stizz claimed Artist of the Year, Hip Hop Artist of the Year, and Video of the Year for “Trying to Find My Next Thrill,” the short film accompanying his most recent album.

Since its founding in 2015, Dorchester Art Project has grown in leaps and bounds in recent years, and become a hub of arts activity in the area. The facility includes a gallery space, a black box live music venue, and 14 rentable artist studios with preference given to local emerging artists.
As a music incubator, DAP presents multiple shows each week from touring and local bands and artists alike, and also hosts a monthly open mic event that showcases Dorchester’s talented rap scene.

DAP gallery director Emma Leavitt told the Reporter that the project’s volunteers were excited to be acknowledged for their hard work, but also recognized that the community they’ve built is part of a larger movement around them.

“We’re super grateful for the recognition and want to acknowledge the amazing community that surrounds us because nothing would be possible without them,” Leavitt said. “We feel like we are just riding the wave. Boston is finally paying attention to the hip hop community and that is so important. 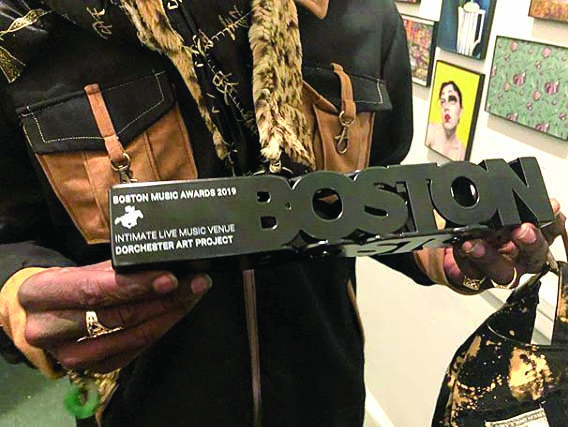 “Ultimately,” she said, “it feels great to be validated but we also want to say it’s not a competition and Boston needs all the independent music venues it can get. So show love to all the intimate locally-run live music venues in your life and support them whenever possible!”

With last week’s win, Cousin Stizz has earned the honor of BMA Artist of the Year two years running. The rapper, now a household name from Boston to Los Angeles — where he is currently based — continued to see his national profile grow with the release in August of “Trying to Find My Next Thrill.”

The award-winning short film that heralded the rollout of the project functions as both an ode to Stizz’s hometown and a chilling illustration of pain, loss, and the shortcomings of fame.

The video, directed by Gilad Haas, begins with a carefree Stizz riding around Fields Corner with a pair of friends. The MC’s track “The Message” provides the soundtrack for a series of slow, panning shots of three-deckers, Town Field, and the Fields Corner busway.

Soon, the video transitions to a future timeline in which Stizz is living large in Los Angeles, thousands of miles from home. A montage of Stizz partying in the club alternates with a sobering depiction of a drug deal gone bad back in Boston, through which Stizz’s friend ends up losing his life to gun violence. Sitting surrounded by extravagance and excess in the club, Stizz’s smile slowly fades as the memory of his lost friend returns to haunt him.

Cut back to Fields Corner, where a somber Stizz is reunited with one friend, but not the other. A cool-toned camera filter shows how the world seems duller through his eyes now that his friend is gone. The video ends on that note, concluding with a visual depiction of the trauma and nostalgia that informs much of Stizz’s storytelling.

The wealth of Dorchester talent on display at the 2019 Boston Music Awards reflects the surging hip-hop scene in the neighborhood, one that has been historically prolific but long under-recognized. As the lengthy list of winners and nominees indicates, that reality is beginning to change.