Tracking an odyssey from war-torn Vietnam to a busy, family-owned shop in Savin Hill

As customers stream through the busy Vietnamese sandwich shop and market on Dorchester Avenue in Savin Hill, maybe a lucky four of them might be able to snag a seat. It is a warm mid-May day, and owner Jennifer Nguyen sits at the shop’s lone table and routinely dodges back behind the counter to check on the food assembly line, greeting the multi-ethnic parade of people ordering bags of sandwiches and plates of noodles, spring rolls, rices, bright mixed vegetables, and colorful desserts.

About 25 years after Nguyen first started working in Banh Mi Ba Le, the shop is a regional favorite with a well-earned reputation for some of the best banh mi in the city. Crackling crusts around cloud-light, pillowy centers make the signature baguettes a delight in and of themselves. Pack in the seasoned meats, pickled vegetables, perfectly crisp cucumbers, a bit of spicy peppers for the bold, and the sandwiches are a beloved enough treat to bring in regulars from well outside Dorchester and even Boston.

The 59-year-old Nguyen woke up before the crack of dawn in Quincy – “We just sleep there,” she jokes – to get to her shop at 4 a.m. The shop is open from 5 a.m. to 8 p.m. every day, through snowstorms and holidays alike.

Her father, a South Vietnamese soldier, instilled in her a dedication to hard work and family.

“He said, and I will not forget: You want to be successful outside, you have to take good care of your family, and if that’s not good, you cannot do anything outside,” Nguyen said. “My father would say: One stick, you can break it easy, but three is very hard. Raise your children right, and then you go to the community. You have to share.”

When she and her family arrived in the United States with nothing in the early 1980s several years after the fall of Saigon, they were given clothes and supplies by churches, charities, and neighbors. With whatever scarce free time she has, Nguyen, a mother of four, tries to give back to Dorchester and bask in her ever-growing family.

The neighborhood changed over the years, which Nguyen watched from the stretch of road between Pearl and St. William streets. A smile flashes across her face as she recalls the evolution from her first years here, when Vietnamese business owners were just starting to become a staple in the area between Fields Corner and Savin Hill, to today, when “everybody knows my sandwich.” 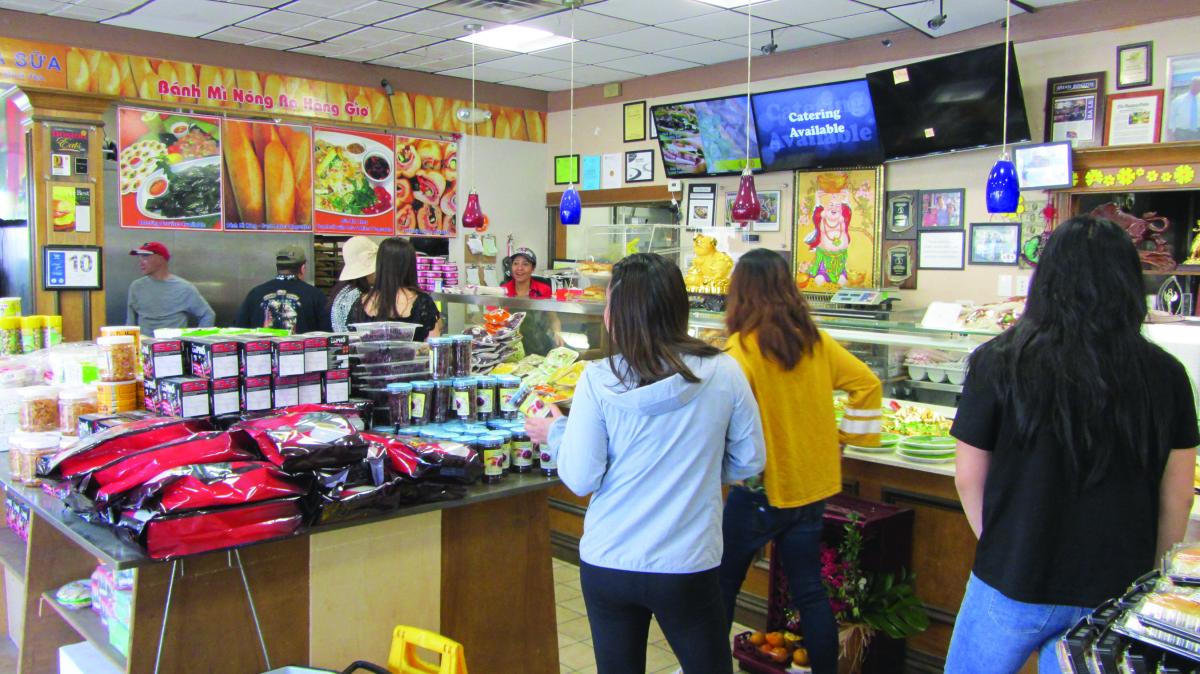 The interior of Banh Mi Ba Le is often packed with customers. A planned expansion project into the adjoining building would make room for a small eating area. Said Nguyen: “I just want my customers to have the space to sit down and eat.” Jennifer Smith photo

She added, “Now it’s just totally different than then.” Looking ahead, “especially about four or five years from now, it will be very, very different. And I’m very happy when I stay here to serve the sandwiches and then I see a different face, a new face. The young, age around 30 to 35, move here to Dorchester a lot to stay. And I’m very happy. And I know Vietnamese people, when they come in a long time ago, they spend money, they spend time to build the small business and they work hard to do that. But it’s not only Vietnamese people to be Dorchester. It’s everybody to work together.”

Nguyen’s family, once owners of a small restaurant alongside Cam Ranh Bay, did not make it out of Vietnam in 1975, when the South Vietnamese capital of Saigon fell to North Vietnamese forces. Her father worked backbreaking hours as a land-bound fisherman to support them, and Nguyen, just 16 years old at the time, herself sold watermelons to help.

The family managed to leave in small groups over the next decade; two sisters found their way to Boston in 1980. After a hard trip by boat from Vietnam to Hong Kong, completed in large part thanks to the mercy of a passing fisherman, Nguyen, by then married and a young mother at 20, arrived in Dorchester in 1982.

“I’ll never forget when I first come in,” Nguyen said. “My sister come in the year before. She rented an apartment right down in Ashmont Station, and we are like 20 people living in the same house… my mom, my father, my sister, about 20 people live in the same house, and then the neighbor, the kids, come over to look us over in the window because we are many people living in one apartment. But we are just very, very happy. We are in the freedom country, and from that, we just lived in Dorchester.”

Her sister owned Ba Le when Nguyen began working with her, just after her divorce in 1994. Some seven years later, Nguyen took over and never let up. Her shop sits in the northern reaches of the Vietnamese business community along Dorchester Avenue, in an area that is home to the state’s largest Vietnamese diaspora and just north of the section of Fields Corner that some are pushing to have dedicated as a cultural district called “Little Saigon.”

Vietnamese women like Nguyen carried a massive burden after the war, starting in a new country from scratch if they made it there at all.

“Talking about the Vietnamese woman, I think not only of myself,” she said. “I’m very proud of all Vietnamese women, because we left because of the war and a lot of women just handled a family without husbands, husbands in the jail. We left the country, like a lot of people. When 10 people go together and when we come in the freedom country, we survived with only two or four. We left the family behind. My family is lucky, but I can see all the stories. I never forgot and I’m very proud of all the Vietnamese women – they stay home alone, they take care of the children, they come in here without husband and raise the children, put the children in school, and worked very hard.”

Nguyen has been an attentive tenant on the property, one of a few Boston lots owned by the Kelley family, which Nguyen describes as “very good” landlords. For years, “I fixed the roof, I do everything, and finally one day about two years ago, he called me and said, “Jennifer, I decided to sell the building. You can afford it,”” Nguyen said. “I’m very, very, very happy. I’ve been waiting so long a time. And finally I got the building.”

She bought the 2,830-square-foot parcel at 1050-1058 Dorchester Ave. for $1 million in July 2017, according to land records. And that meant room for expansion, a prospect that brings out a laugh as Nguyen points out the hovering patrons hopefully circling the sole table in the shop.

“You can see here I have only one table and four chairs,” she said. “So customers come to get the sandwich and, like, you have a route: six people come into my shop, so four people can sit down and two people have to stand up. And a lot of customers, they love my sandwiches. They ride all the way far from New York, from Albany, or from Vermont. They come in here and then they have to bring the sandwich to the car to eat. And now, I got the building and I cannot wait to cut the wall between there and then make it bigger. I just want my customers to have the space to sit down and eat. Yeah. That’s the only thing I want to see.” 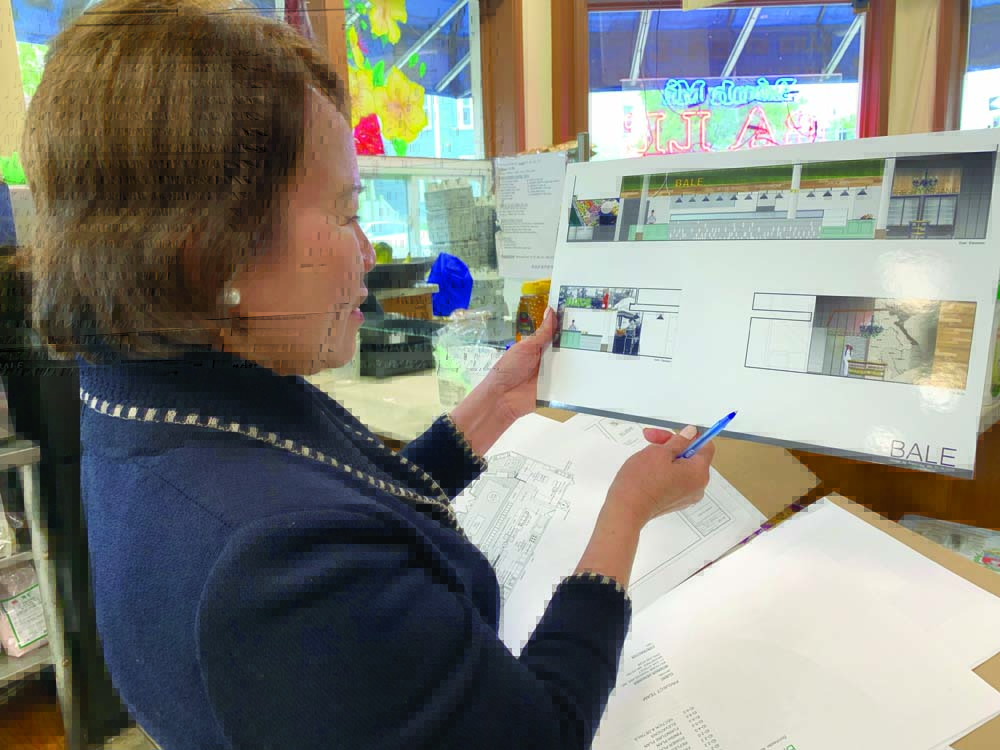 Nguyen surveys the plans for expanding her restaurant to include additional seating. “This is my dream” she said. Daniel Sheehan photo

By knocking down the wall between her shop and the adjoining building next door, Nguyen will be able to offer additional seating. She earned the support of the Columbia-Savin Hill Civic Association this year, as well as the mayor’s office, which described Ba Le as a “great addition to the neighborhood” before the Zoning Board of Appeal. The board unanimously approved the requested variances on Jan. 29.

The deli and take-out use was extended to next door, which would allow for an additional eight seats. Inspectional Services has issued a short-term building permit for interior renovations and an electrical permit to rewire the place for take-out purposes.

Expansion aside, Nguyen said that up until the deed itself was signed, she did not expect to ever own her shop fully. “Of course, I have to pay to get that building, but I feel it’s a gift to me,” she said. “It’s a big gift to me.”

She has worked with a team of women for more than two decades, Nguyen said, and as she once worked with her sister, Nguyen’s daughter now works with her at the shop. Her four children are now between 36 and 39 years old, and they have eight children in total.

Nguyen said she will think about her next steps in a few years, with thousands more 10- to 12-hour work days under her belt.

“After that, I want to leave that for my children and my grandchildren, to continue to run the business,” she said. “Because this type of business, when I work more than 20 years, it’s not only to do the business, but you can see a customer every day – the student, the contractor, the people who work in the office. Every face, with my family, like being a friend. We make money for living and then we also have a good friendship with the customer. That’s something I don’t want to miss, that I want to continue to grow if I could.”

Jennifer Smith is the News Editor of the Dorchester Reporter. She may be reached at Jennifer.Smith@dotnews.com or follow her on Twitter @JennDotSmith. 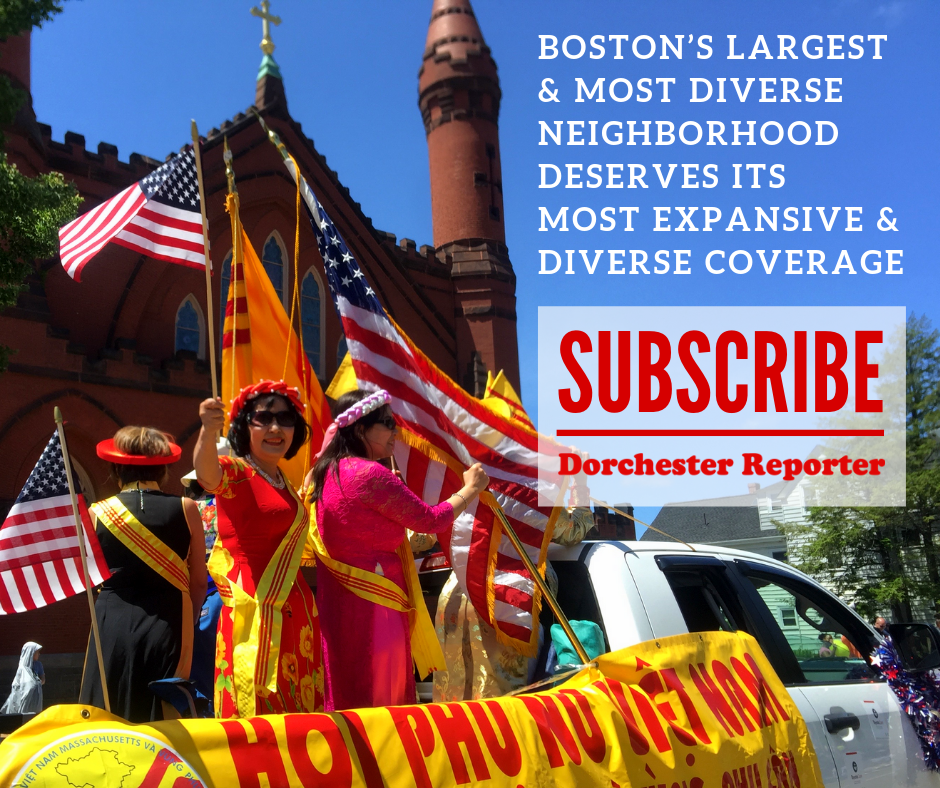