A 27-year-old axle on a Red Line car fractured and caused a June 11 derailment, MBTA officials announced Monday, offering a clearer picture of the problem that has led to months of delays and headaches on a train line that transports hundreds of thousands of commuters.

The train reached that condition as a result of gaps in inspection schedules and missed warning signs, investigators found. While axle damage sometimes occurs on heavily used vehicles, the train in question was a matter of weeks away from a semiannual inspection that would have detected it.

Crews performing preventative inspections roughly every three months also had not been checking the ground ring, a related part that helps keep the train electrically grounded, that was damaged and caused the axle to become fragile.

MBTA Deputy General Manager Jeff Gonnville said the transit authority had no records of any prior incident with the ground ring.

Moving forward, the MBTA will work to prevent those problems from arising again. Ultrasonic inspections will now be conducted annually instead of every two years, and regular inspections will include close examination of the ground ring assembly for any damage that could emanate out to the axle or other parts.

"We have impacted a lot of people on the Red Line over the last several months," Gonneville told reporters at a Monday briefing. "It is our obligation to make sure this doesn't happen again."

Gonneville told reporters Monday morning that the MBTA knew early on that a fractured front axle, in service since 1992, on the third car of the Red Line train caused it to careen off the rails just outside of the JFK/UMass station in June.

The News Service inquired in early July about a broken axle on the derailed train set; at the time T officials said only that the agency was still working to determine the root cause of the derailment.

As investigators probed how exactly the axle was broken — and how it sustained damage after its mid-2017 ultrasonic inspection showed no problems — they discovered another problem with the ground brush assembly.

The brush receives electricity from the motor and transfers it onto a ring wrapped around the axle, which then directs it through the wheels and into the rails. A functioning ring is made of slick, clean steel, sealed off from the environment to prevent being worn down.

But the ring next to the broken axle was covered in pits and scuffs, disrupting the clean electrical connection and sending what Gonneville likened to lightning on a smaller scale arcing across the axle.

How exactly the ring came to be so corroded remains unclear, Gonneville said. A December 2018 preventative maintenance inspection, one conducted roughly every three months, noted that the assembly itself was missing the cover that keeps it sealed.

But workers at that time did not look closely at the rings to check for damage, so debris ranging from track grease to dust had months to get in and wear down the quality of the connection. 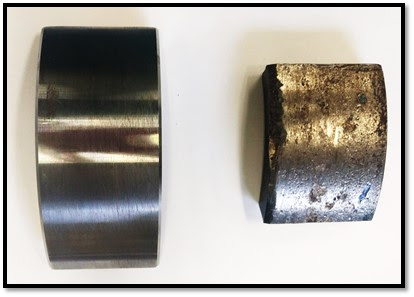 A functioning ground ring (left) transfers electricity through a train's axle into the wheels and rails, but the ring on a Red Line train (right) was corroded over time and sent electricity arcing through the axle, making it brittle. MBTA investigators believe a fractured axle that had been damaged by electricity caused a June 11 Red Line derailment. [Photo: MBTA]

Another inspection in May 2019, just one month before the derailment, reported that two different brush parts were replaced on the train that derailed, but no employees caught the damage to the ring itself.

As a result, the electrical arcing continued, wearing down the axle in the process.

Gonneville stressed that there are no other immediate risks to the system from similar causes. Crews performed ultrasonic inspections on the entire Red Line fleet after the derailment and pulled seven axles flagged for potential issues from service, and two ground rings that demonstrated even the start of damage were also replaced.

"There isn't any other axle out there exhibiting any cracks or cracks that are beginning to propagate," he said.

Red Line riders have experienced significant service impacts in the wake of the derailment because, as the train veered off the tracks, it damaged two buildings housing signal infrastructure and destroyed a third. Crews for months had to direct trains by hand, a slower process than automated signals.

Repairs are complete on most of the system, Gonneville said Monday, with the Ashmont line returning to fully automated signals last week. A small stretch from JFK to Tenean Beach — about halfway to the next station on the Braintree line — is still being directed by hand, but Gonneville said service should be back by mid- to late October or sooner.