This graphic shows how Moakley Park would be transformed by the raising of key elements above: prospective 21st century sea levels. Rendering by Stoss Landscape Urbanism

The Moakley Park of the future would include a new berm to protect against coastal flooding, the elimination of the section of Day Boulevard that runs along Carson Beach, and the creation of a new track and football stadium under a conceptual plan unveiled by city of Boston officials and presented by representatives of its design team last Thursday during a community meeting in South Boston.

About 80 people reviewed the plan, which Parks and Recreation officials emphasized is strictly conceptual and unfunded at this stage. But the proposal serves as a working document for the potential transformation of what some call the “super park” that straddles the Dorchester and South Boston border and offers a key recreation destination for the surrounding neighborhoods.

Thursday’s meeting at the Iron Worker’s Union Hall was the fourth in a series of sessions that was inaugurated last year. The city of Boston owns and manages the sprawling park and hopes to incorporate it into a larger plan to protect the city from rising sea levels and corresponding coastal flooding. There is no set time line for the full plan and, critically, no dedicated funding yet in place for its implementation, which city planners say could eventually cost hundreds of millions of dollars to execute over many years.

Christopher Cook, the city’s commissioner of Parks and Recreation, addressed the meeting, describing the still-emerging plan as “a bold vision” that maintains the recreational function of the park, plays a role in a resilience strategy for sea-level rising while preserving the neighborhood.

Chris Reed, founder of Stoss Landscape Urbanism, the design team for Moakley Park, and the firm’s project manager, Amy Whitesides, presented the three visions that the design fulfilled: protecting the residential community from flooding and impact of climate change, retaining and enhancing the sports fields and play areas, and creating equitable access for all residents.

This rendering by the design firm Stoss Landscape Urbanism presents a south-looking view of the “bold vision” for Moakley Park.

The design features not only fields and tracks for various sports, but also recreational spaces such as an adventure playground, community building, picnic overlook, family slope, and flex lawn. A berm, with elevated sports fields and recreational space below, would form the flood protection. Basketball courts would be safely floodable and easily drained after a storm. 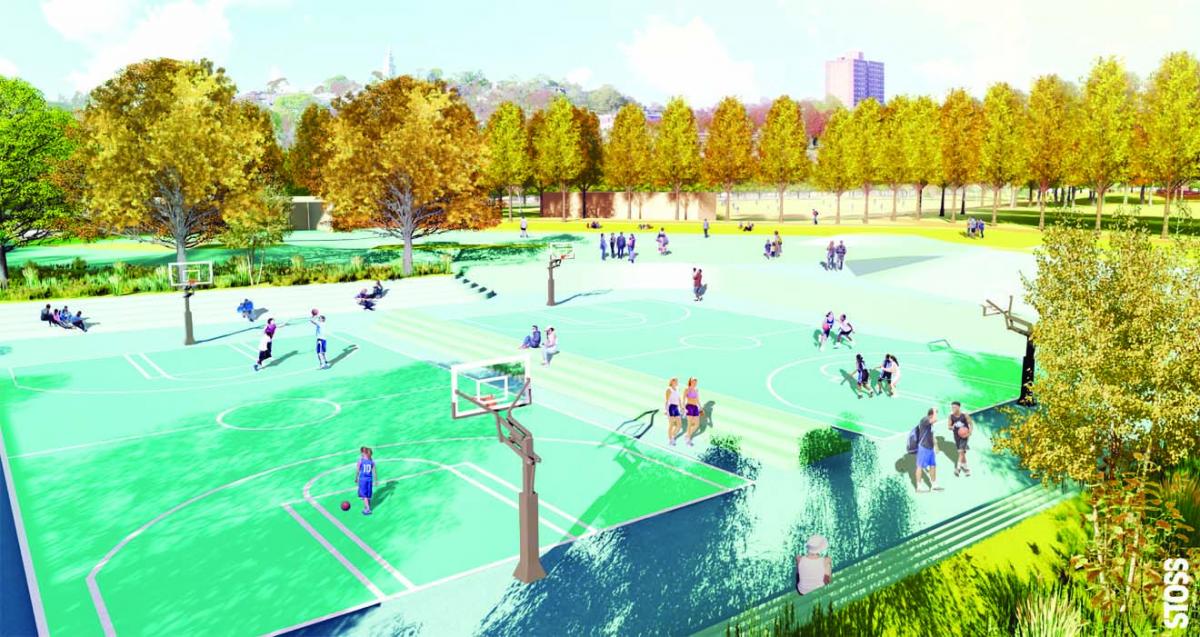 Under the conceptual proposal, a section of Day Boulevard would be transformed into a car-free promenade connecting the park with the beach. Reed said the design integrates Moakley Park into the waterfront, and aids in “safe access for more people to really experience what’s wonderful about Boston Harbor.”

City officials say that they have consulted with counterparts from the state’s Department of Conservation and Recreation (DCR) about the concept of eliminating the segment of Day Boulevard that bisects the park and Carson Beach, but that no firm plans have been made to advance the plan.

Other improvements to the road system around Columbia Point— specifically the rotary at Kosciuzscko Circle— would need to be planned out and incorporated into any change to Day Boulevard, according to city officials who briefed the Reporter on the concept.

Olivia K. Dorrance, a spokesperson for DCR, confirms that state officials have been looped into the planning. “On multiple occasions, the City of Boston has consulted with the Department of Conservation and Recreation regarding the municipality’s efforts to increase the climate-change resiliency of South Boston, including the Joe Moakley Park Vision Plan, as well as the potential use of state-managed land in the immediate vicinity,” said Dorrance.

“At this time,” she added, “the agency is reviewing information provided by the City, and will continue to be an engaged stakeholder as the process moves forward.”

Allison Perlman, the Boston Parks and Recreation Department’s project manager of the Moakley effort, said the city will continue working with other partners including UMass Boston, the Massachusetts Water Resources Authority and Winn Development. The design will next go through modeling tests to determine if the plan sustains an ability to withstand floods. Another step for the city is to look into maintenance strategies.

Perlman said that part of the plan moving toward implementation is Phase 1, a small piece of land on the upper left corner of the design designated for a sports court complex and water/play space. Like the other parts, there is no firm timeline or secured funding source for the first phase.

“We have requested capital funding for the design and development. As we move that forward, we will start to think about what our avenues are for funding and construction, and we are actively seeking all that now,” Perlman told the Reporter. She also added that the budget plan for the overall park is too “rough” to be shared.

“Over time, we are not sure what the future phases are going to be. We have a lot to think about in the next year about how to balance park-user needs, what the funding strategy is, what is available and what partnerships we need to develop,” she said during the meeting. 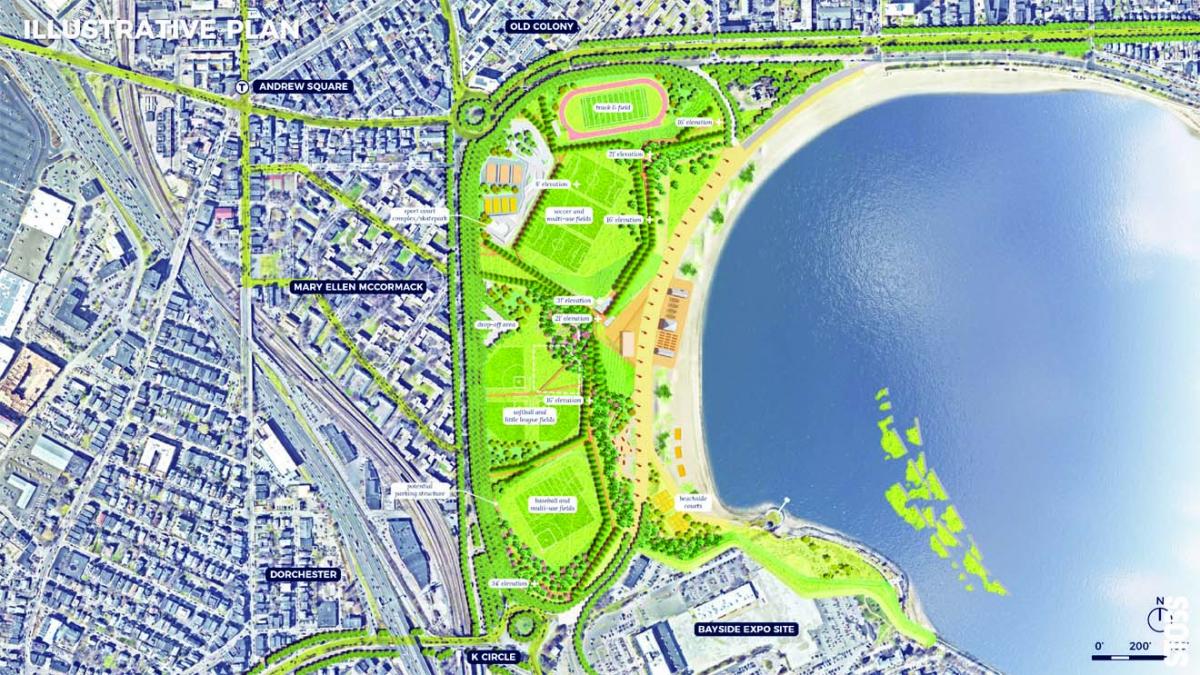 An aerial view of the proposed layout.

City officials emphasized the value of Moakley Park for communities. “Moakley Park played a huge role in the lives of many people in this room and generations of people from South Boston… Everybody’s voice is important, and everybody’s voice will be respected,” said City Councillor Ed Flynn.

Community members who spoke with the Reporter mostly approved of the plan, with a few reservations about transportation and accessibility for seniors.

“I think they did a brilliant job of creating the necessary topography to protect people, and at the same time building new and improved athletic fields that are more multi-purpose and creating areas that are not for organized athletics but for families and individuals to use the park in any way they want,” said Kathy Abbott, president of Boston Harbor Now. 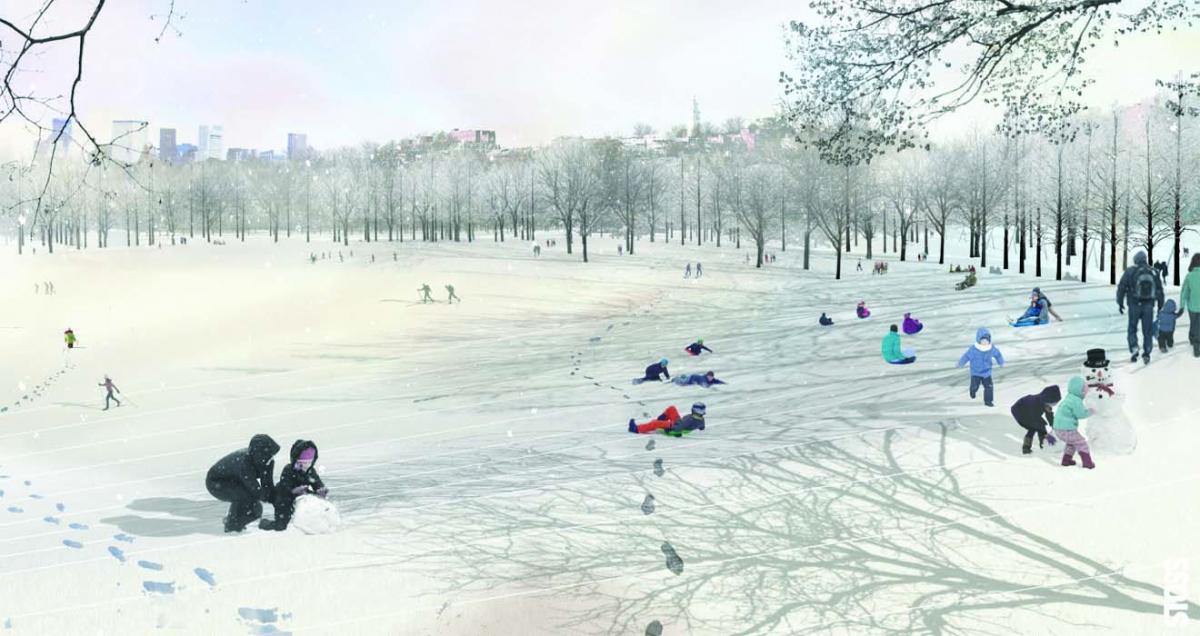 Cam Murphy, an elementary school swimming paraprofessional who volunteers at South Boston Little League, said before the meeting that he was concerned with how athletic fields would be implemented, but later he noted that all the fields are still in place.

Roger C. Tepe, who lives near the park, said he likes the “ambitious” plan, but noted there is no provision for parking. “I’m not sure everyone will want to bring their kids for a soccer game and drag all their equipment on the train,” he said.

Louise Baxter, a South Boston retiree and an advocate for public transportation, said she would like to see buses running more frequently from Roxbury to the park.