“Staged: New Visions of Boston Music Photography,” a newly installed exhibition currently on display at Dorchester Art Project (DAP) in Fields Corner, offers a glimpse at some of the best photography work going on in Boston’s music scene.

At the exhibition’s opening reception last Thursday evening, “Staged” curators Jaypix Belmer and Jenny Bergman told the Reporter that the object of the show was to train a lens on the newest generation of photographers popping up on the scene.

“I think photographers don’t always notice each other as much as they should,” said Belmer. “Boston needs a network. We’re hoping this show will help people connect and help get the word out.”

Belmer, who grew up in Uphams Corner, has spent close to 20 years shooting the Boston music scene, mainly in the hip-hop and rap circles of Dorchester and Roxbury. A self-described “portrait photographer,” Belmer aims to be creative when they're at work.

“When I shoot, I always try to create something iconic,” they said. “I think about it as getting someone to express their visual soul, and that’s about getting someone to appreciate their own self, to feel good about themselves.” 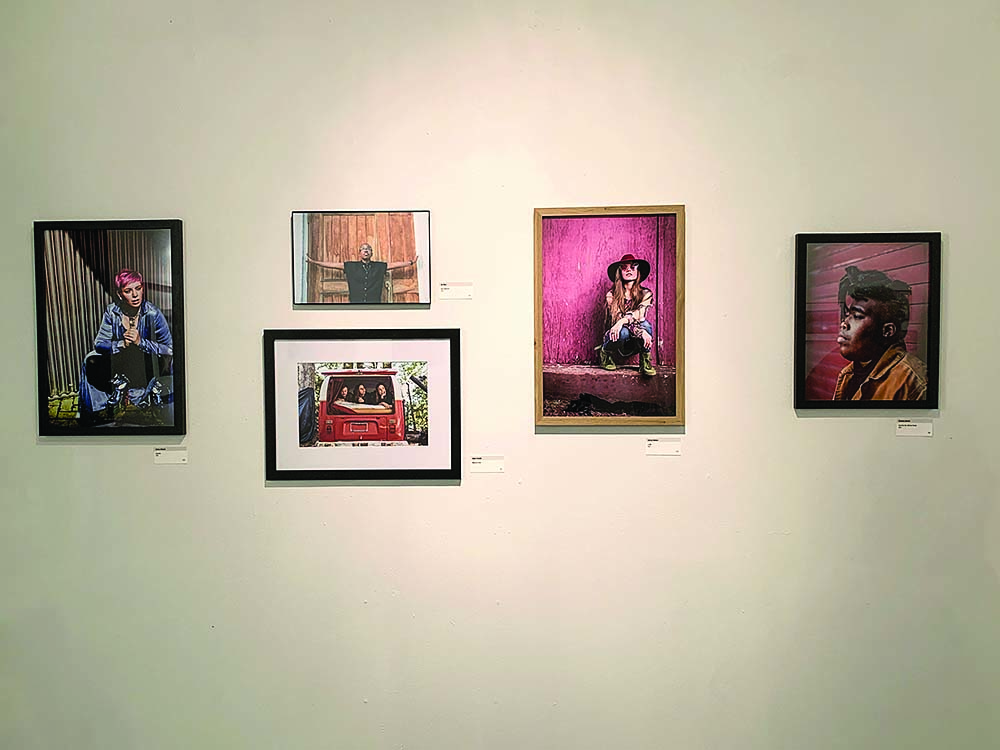 An array of portraits on display at the exhibition.

Capturing that perfect shot that says something about the essence of the person often requires getting them loose and doing something they’re not used to, said Belmer.

“It’s like, ‘Who are you right now?’ You know? A lot of my portraits come from that question: Who are you? There’s a truth in confrontation.”

Bergman, a Dorchester resident and veteran in the Boston indie music scene, said the show illuminated photography talent in all sections of the city, from house shows in Dorchester and Cambridge to sets at venues like House of Blues and Paradise Rock Club.

“I wanted to celebrate the diversity of the scene, and provide visibility for emerging artists,” she said. “I’m hoping this show brings people together and celebrates all sides of the artform.” 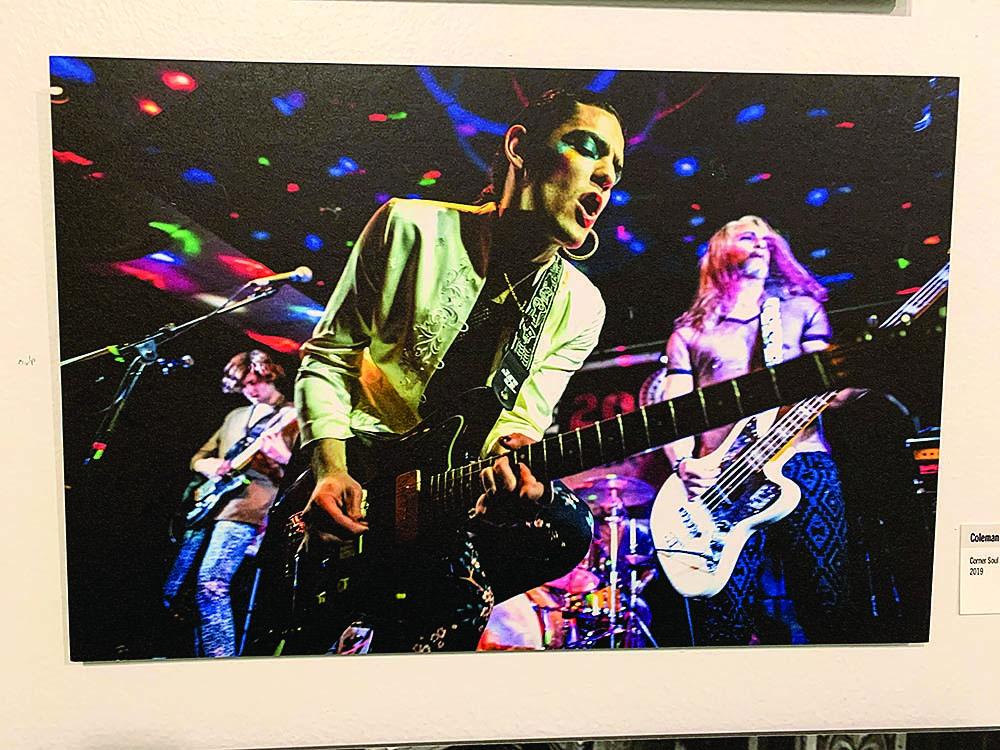 Coleman Rogers captured this image of a lead guitarist mid-solo.

Bergman started The Secret Bureau of Art & Design, a boutique photography agency dedicated to indie bands and musicians, in 2015. Last year, she was nominated for two Boston Music Awards for her work, which she says looks to tell a story that takes place beyond the stage.

“We want to show the full dimension of a show’s experience,” she said, pointing to a portrait of a bandleader in a park with his spouse and young daughter. “Most of the time we see musicians as performers, but they also have families. This is a way to show that more natural, organic side.”

Last Thursday night, Bergman and Belmer were among the more experienced photographers in the gallery crowd, which included several young artists just beginning to dip their toes into the field.

“For a lot of the photographers here it’s their first time getting to see their work displayed. So it’s a kind of an unexpected delight,” said Bergman. 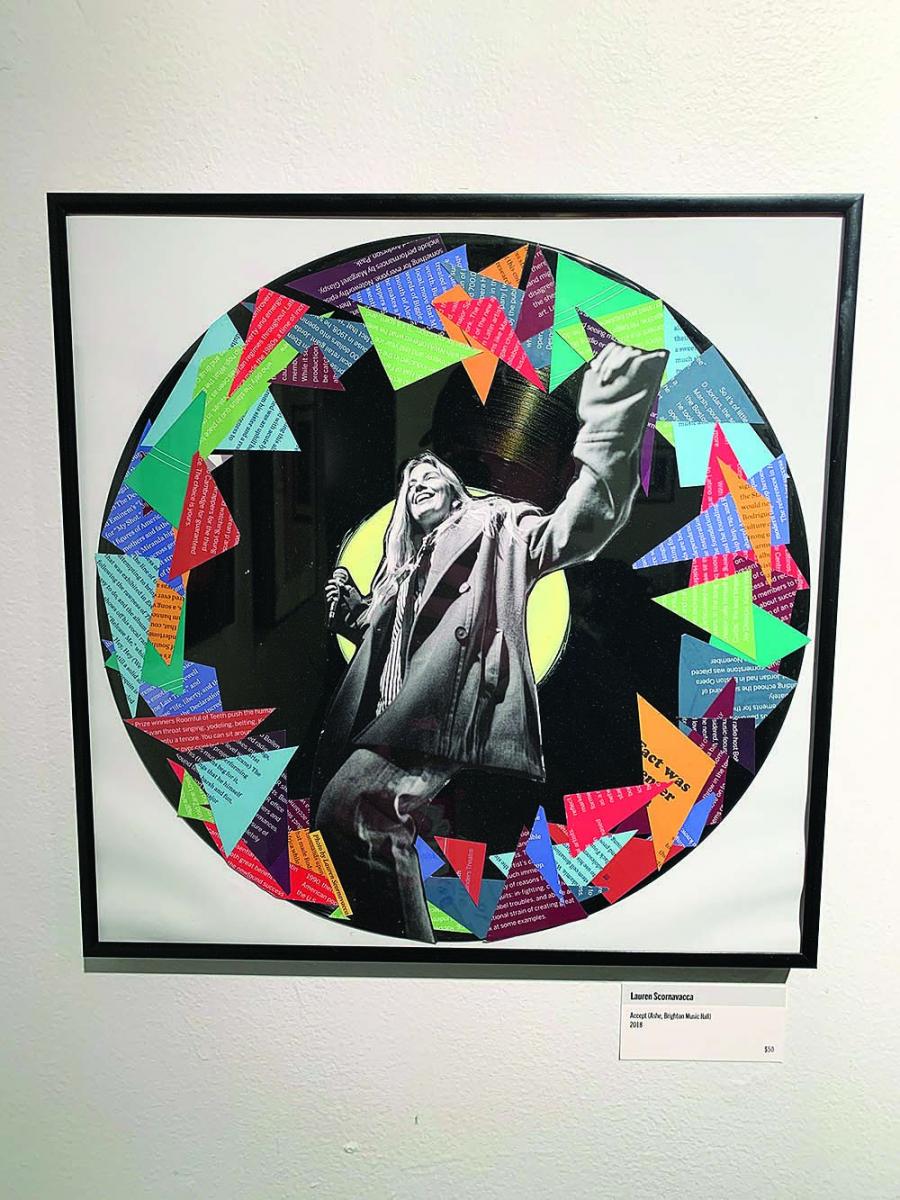 A photo of singer-songwriter Ashe taken by Lauren Scornavacca at Brighton Music Hall.

Echo Davis, a student who occasionally shoots at concerts as a hobby, said it was “surreal” to see their work framed and hung on a gallery wall. “You have to be patient at times, but once you get the shot, it’s a great feeling,” they said.

Brandon Johnson, a sound engineer who moved to Boston from Miami, said he’s been learning photography for the last three years. “It’s really just been a hobby, but it’s been more rewarding than I ever could have expected,” he said. “I’ve walked around [the gallery] like three times already. It’s inspiring; I’m just taking notes.”

“Staged: New Visions of Boston Music Photography” will be on display at Dorchester Art Project through Dec. 14. Gallery hours are noon to 6 p.m. on Saturdays and Sundays.