The JFK-UMass Red Line platform was crowded with passengers waiting for trains on Wed., June 12, a day after a disruptive train derailment. Jasmine Braswell photo

Red Line service resumed in fits and starts on Wednesday, a day after a train derailment at JFK-UMass station disrupted the MBTA system and caused residual delays across the city. But commuters can expected ongoing delays, according to T officials, who revealed more details today about the scope of damage done to infrastructure, including critical signal equipment.

Rail service was back on track, but sporadic at the Savin Hill station during Wednesday’s morning commute. With arrival time boards shut down since Tuesday’s incident, a train pulling up to the crowded platform around 8 a.m. sparked momentary hope until it stopped just outside the station, sluggishly moving past while playing an announcement that the train was out of service.

New arrivals to the station began to inquire of other commuters about how long they had been standing waiting for a train. Another train come through after about five minutes, already crowded and filled to the doors by the time it pulled out of the station a few minutes later.

The JFK/UMass platform was stacked four or five people deep along its length as the Red Line entered the station. It was 8:20 a.m.

Commuters trying to reach Dorchester and points south from the city core encountered long delays— as long as 20 minutes— at Broadway and Andrew. The MBTA said the slow-downs were the result of “signal problems.” 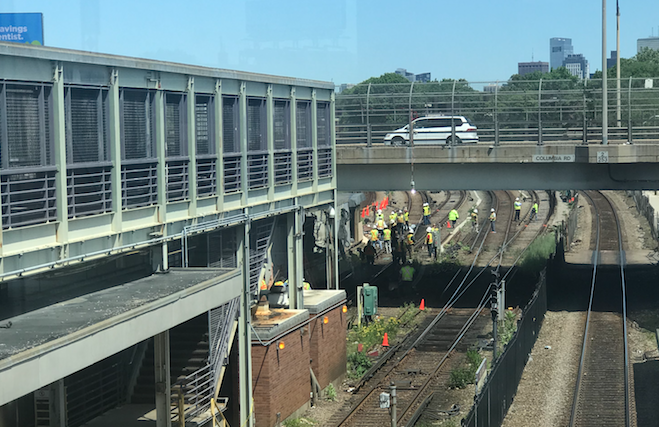 A two-hour shut-down of train service between North Quincy and JFK-UMass began at 11 a.m. and was completed by about 1:30 p.m., earlier than planned. The shuttle buses replaced trains on that leg as workers made repairs in the area of Tuesday’s derailment. About two dozen workers were seen at the site during that time.

General Manager Steve Poftak said Tuesday that signal bungalows near the JFK/UMass stop were damaged by the derailed train, and in a Wednesday series of tweets, the official MBTA account said that crews stationed along the tracks will need to direct traffic manually until the system is repaired. As a result, trains that serve passengers on the line will move more slowly than usual, and electronic countdown clocks will remain inactive across the Red Line.

"Looking ahead, bungalows will need to be rebuilt, new signals & cables installed, tracks repaired. At this time, we can't say how long that will take," the MBTA wrote. "For now, trains will continue to travel at slower speeds. We ask customers to allow extra time & use all available services."
An MBTA spokesman said Wednesday that there is still no estimate of what full repairs will cost.

Tuesday's derailment was the second on the MBTA's passenger lines in less than a week and the fourth this calendar year. In response, officials hired LTK Engineering Services to conduct an outside review of all derailments in the past two years.

Commuters who spoke to the Reporter while waiting for trains at JFK-UMass on Wednesday were still exasperated by the experience the day before.

"I've been riding the train forever and the worst service is the red one, period. I mean, I done lost jobs from taking the Red Line cause they didn't want to believe that the Red Line was having issues." 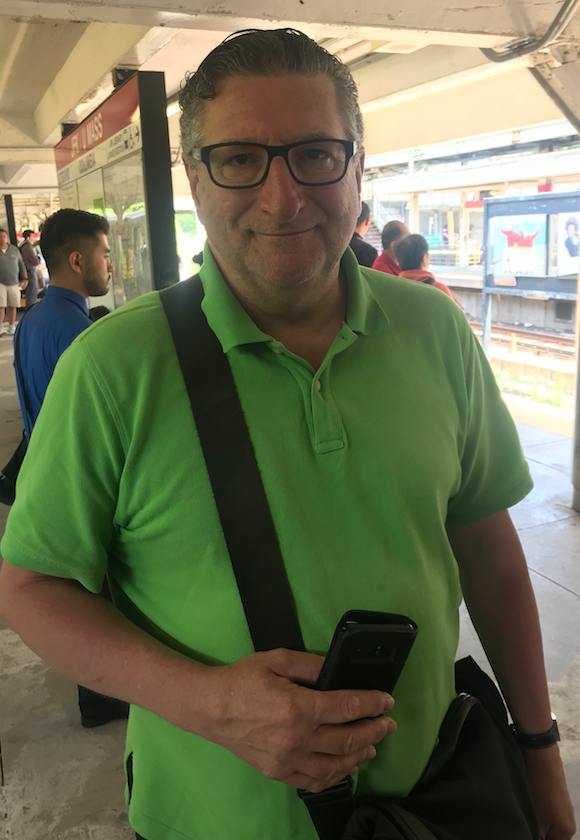 Paul Milizzano, 58, of West Quincy, estimated that Tuesday’s commute cost him over $100 in ride-share expenses and lost time at work.

"Yesterday, it took me three-and-a-half hours to go from home to Back Bay on Newbury Street and two hours to get home last night,” he said. The worst part, he said, was the huge crush of people at North Quincy who were all trying to get on a shuttle bus in the rain.

Lia Cohen-Odiaga, a 19 year-old UMass Boston student from Quincy, was aggravated by the inconvenience, but added that she has come to expect it. She wants government to step up its game to fix the system.

"Things happen. This is an old system. I mean they really need to ramp up,” said Cohen-Odiaga. “They need to put more money into the T and ramp up the infrastructure and fix the tracks and stuff like that….I've been using the T every day since 2013. I feel like they've been putting band aids on broken legs for that entire time— six, seven years.”

"I feel like the current government here has not invested enough men at fixing this because some of the stuff has been around for decades. Like it's not, you know, like rebuilding one station or another every now and again. Like that's not really, that's not going to fix the problem. And that's what we got, you know, we had a derailed train."

"I think that's unacceptable,” she added. 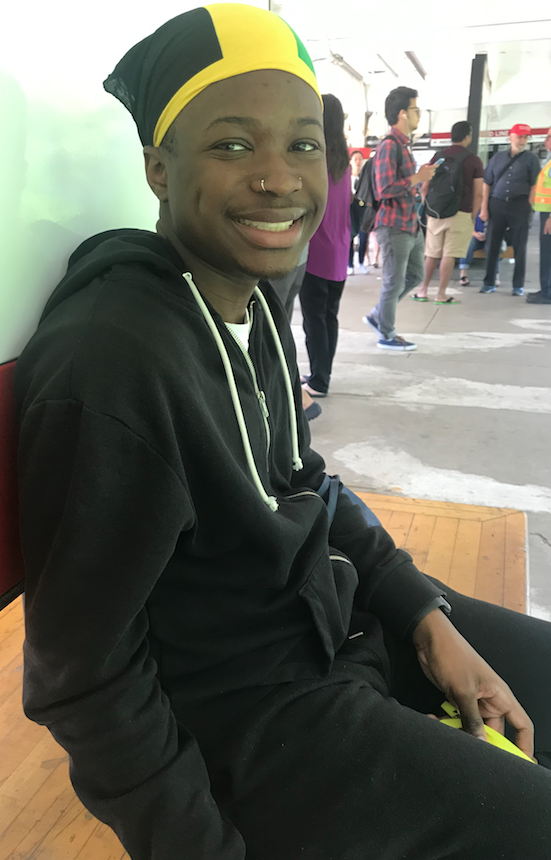 Davante Poole-Wint, 16, says his commute time from Codman Square to Boston Collegiate Charter School has definitely taken a hit— and it's stressing him out during finals week.

"I mean I'm usually late, but I've been even later because it's so slow," said Poole-Wint. "And then when I attempt to take like an Uber, I see the [cost] is like really high and I say I might as well just take the train because no matter what, I'm still going to be late and I have finals." 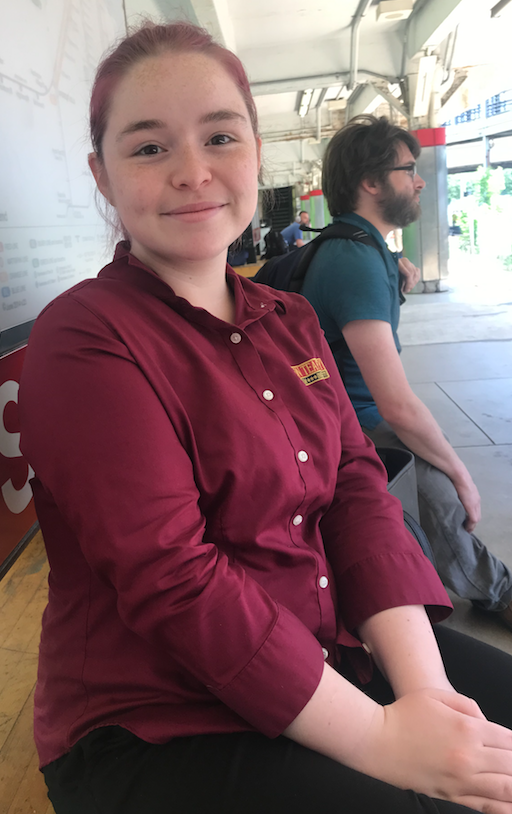 Christina Jenkins, 20, said she was given confusing instructions by a T worker on Tuesday when she arrived at North Quincy during the morning rush.

She was stunned to find that in fact she had to get on a shuttle bus at JFK to get into Boston.

"Like I don't understand why they can't, you know, figure out a better solution or like keep things organized because it's kind of unfair to everybody else.”

“I don't think it's worth the the price, like $3 for trains that are late all the time. And there's always issues when people are late and losing money. So the fares are going up and we're losing money and not getting to work on time and people were probably losing their jobs over it.”