A rendering shows what the proposed Dot Block development might look like from the vantage point of Dorchester Avenue. A meeting to update the community on the latest design changes is set for Mon., Feb. 11. Image courtesy Samuels & Associates

The development team for Dot Block, a large mixed-use project heading for Glover’s Corner, filed a notice of project change this week. The revised project expands the amount of green space in return for an underground parking structure and a reduction in overall retail space.

Samuels & Associates, collaborating with Gerald Chan’s Wintergold LLC, envision a four-building complex with a combination of neighborhood retail and restaurant space and about 488 residential units. An underground garage would contain about 345 parking spaces, and 14 parking spaces are expected to sit on the ground floor.

“One of our key goals in modifying the project design was to create more open space and pedestrian paths through the site to better integrate into the surrounding neighborhood,” said Abe Menzin, Executive Vice President at Samuels, in a statement. “Moving the parking garage underground allows us to create a vibrant mixed-use development with lively ground-level streetscapes and green spaces while promoting greater connectivity within the neighborhood.”

Menzin told the Reporter the project is expected to cost around $200 million. 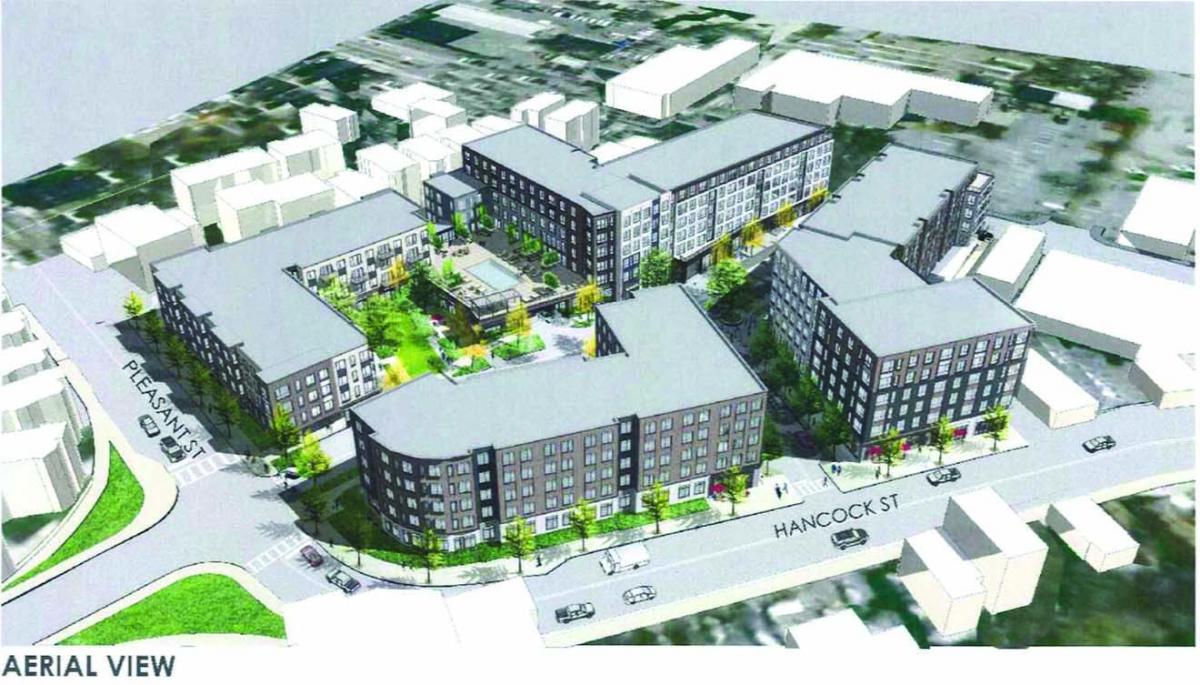 A rendering supplied by the development team behind Dot Block shows the latest iteration of the 488-unit mixed-use development from above. Image courtesy Samuels & Associates

Around seven of the residences are expected to be artist live/work units. Sixty-six units will be affordable housing units with a range of income eligibility, according to the Boston Planning and Development Agency.

“We were really listening to the community, hearing from people that affordable housing’s an important priority,” he said, “and the 70 percent AMI level isn’t a deep enough level of affordable for many of the applicants, so we wanted to do something unique and important.”

Tenant amenities would include shared work spaces, an above-ground pool, and a rooftop deck.

Down from the initial plan, retail and restaurant space would take up approximately 23,000 square feet, and the new project would have 1.34 acres of open space.

Another possibility is what Menzin calls “entrepreneurial retail,” potentially rotating tenants in some smaller spaces to see if there should be a more full build out or allowing new entrepreneurs to shift in.

Menzin said they do not yet have tenants attached to the retail spaces, but expects discussions to take place as the project moves closer to groundbreaking. They hope to break ground in late 2019 after finishing permitting and design.

Two meetings are planned to discuss the new changes, both at WORK Inc. on Beach Street at 6:30 p.m. An impact advisory group meeting is planned for Feb. 6 and a public meeting for Feb. 11, 6:30 p.m. at WORK Inc., 25 Beach St., Dorchester.