Nearly ten years after opening up shop at Eye and Eye Optics in Lower Mills, Bobin Nicholson has a new business partner: his son Tariq.

The father-son duo share passions for opticianry and music, the two forces that have shaped career trajectories for each of them. Both studied music in college— Bobin at Berklee and Tariq at UMass Boston— before returning to school for opticianry apprenticeship programs— Bobin at the now closed Newbury College in Brookline and Tariq at the Benjamin Franklin Institute for Technology in the South End.

The 29-year-old Tariq said having an optician for a father meant he always had a certain familiarity with the ins and outs of eyeglasses.

“I was always very active in sports,” he explained in an interview, “and I didn’t like the Kareem Abdul-Jabbar goggles too much, so I’d wear my glasses and I would never lose them but I would always end up bringing them back to my dad bent up from basketball. It would look like the glasses were pretty much done, and I would watch him just bend and make a couple adjustments, and the glasses would be back to normal...I used to take mental notes of what he did and started to be able to adjust my own glasses. That was my first interest [in opticianry].”

After graduating with a music degree and learning how to self-promote for various jobs and gigs, Tariq said, he discovered a connection between his musical pursuits and his father’s entrepreneurial business.

“I kind of realized there’s a mold of working for yourself. You develop a trade or a skill, and then you market yourself in a way where you can show your uniqueness and your style, and then I just thought about it like, ‘Well, he’s been doing that with the glasses.’”

Bobin, a native of Jamaica who moved to Boston in the 1980s, says he approaches glasses-fitting with the same artistic approach he uses with his music. That artistic lens at his work has always set him apart from more traditional opticians, he finds.

“When I went to school for opticianry, they had a mechanical approach to it,” he recalled. “They said, ‘OK, a guy with this shaped face, this is the shaped frame you put on him. And this frame that has this shape goes on this shaped face.’ So, they made it all mechanical. But within my musical, artistic approach to life itself, I throw all of that away. Because I go by the personality, I go by the art of how this frame looks on this person. 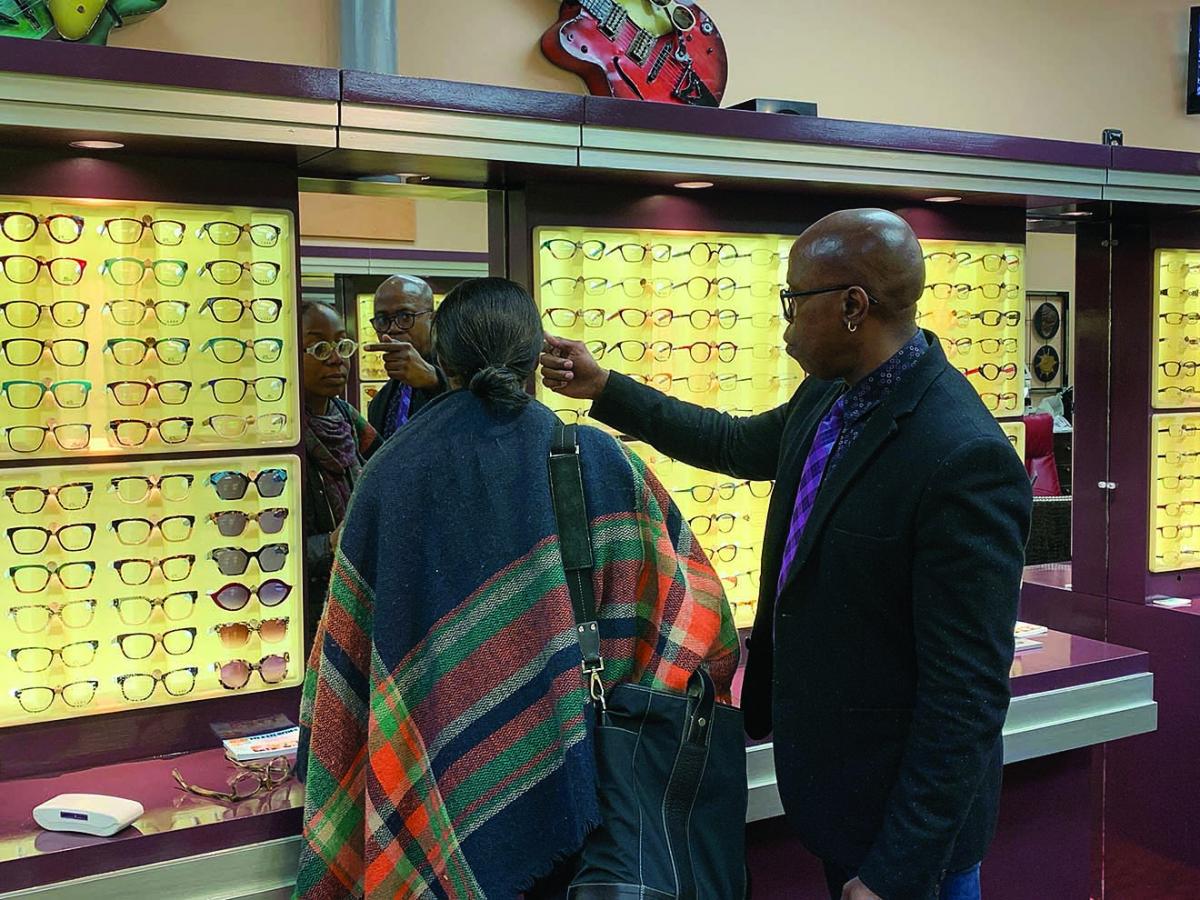 “There is no set way...a pair of glasses is supposed to complement you, your personality, your likeness, and what you want to do.”

Like his father, Tariq has also found that his artistic eye for the unique or the unconventional plays an important role in his new line of work. He prefers the more “out there” eyeglass designs — citing pro athletes like Russell Westbrook as major influences on recent eyewear trends — and encourages customers to express themselves through their glasses, as well.

“I want to show people that they can kind of overcome their fears, in a sense,” he said. “In a business approach, you want to make sure you have a nice collection that can suit all personality styles. But there are a lot of people who come in here who are in a shell, and they want to stick to something safe...I like to try and push people--not force it--but just show them something new. I want to help people have an open mind.”

When Bobin and Tariq aren’t working in the shop, they are often jamming together as members of the Conscious Reggae band, which features Bobin on bass and Tariq on keys. The group, which has been around since before Tariq was born, has played at venues like Fenway Park and Gillette Stadium in addition to a weekly brunch gig at West End Johnnie’s, a summertime gig at Capo in South Boston, and various private events. Now, Bobin is finding that their rhythm as bandmates is translating into chemistry in the workplace.

“It’s a great feeling because it’s a family business and the trust level I don’t have to worry about. The trust is 100 percent, and there’s confidence in knowing that he’s got my back 100 percent...his approach to it is the same as what my thought process is. I consider myself very lucky.”

Eye and Eye Optics in Lower Mills offers a multitude of services including eyeglass fittings and repairs, glasses and contact lens sales, eye exams, and dispensation of prescriptions. For more information, visit eyeandeyeoptics.com.