Any day of the week you might see Earl Faulk picking up trash and greeting neighbors at Mattapan’s Hunt-Almont Park. He thinks of himself as the park’s unofficial ambassador and everybody seems to know him.

He takes a special interest in the young people who seem to be in every corner of the 17-acre facility.

“Your time comes, and it goes, so it’s their time now,” says Faulk. “Our children and our grandchildren, we want them to have fun. That’s all they want to do. They want to play, have fun, and enjoy themselves. As we become seniors, we live through them. The blessed thing is to have a safe place to do that.”

Construction to enhance the 17-acre park, a $5 million project that started under the late Mayor Thomas M. Menino, was largely completed in 2015. Mayor Martin Walsh’s administration has continued funding upgrades.

“We have a day care,” said Faulk. “We try to have something for everyone, space for carriages, we got the walkers.”

Mattapan senior Bessie Spriggs has been taking long walks around the park in the morning for years. Four times around the perimeter is a mile. “With the new park,” she said, “I’ve been faithful in coming. I think it’s the best park in the city of Boston.”

A resident of Mattapan for much of her life, Spriggs says she had stopped using the park until the renovations brought a new vitality to the space. “Now when I come out, I see children. People were afraid to let their children come up here. I raised my kids in Mattapan, so my kids didn’t come to this park.”

But now her grandkids use it all the time, and she is worry free. “The security has been awesome,” she says.

There are five security cameras around the park and they are always on. Additionally, Boston Police officers are on regular patrol, watching over organized activities. Besides tennis and basketball leagues, the park is home to the Mattapan Patriots football and cheerleading program, which launched its season on Sept. 8. 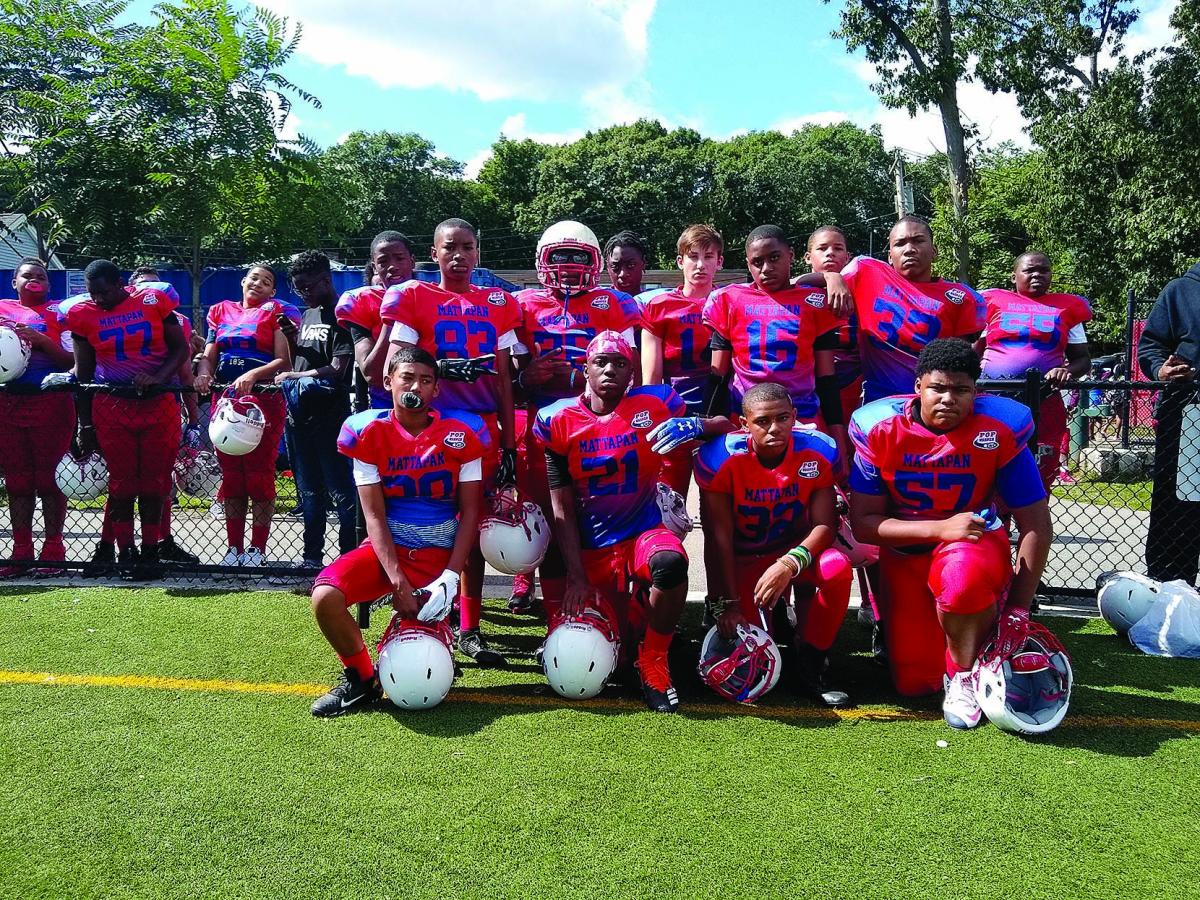 A team from the Mattapan Pop Warner Patriots league on the sidelines at Almont Park’s football field, which will be dedicated to Gareth P. Kinkead, Jr. during a ceremony on Sun., Sept, 29 at 11:30 a.m. Mr. Kinkead was a long time Mattapan resident and activist and a WWII veteran.  He advocated for Almont Park for years for improvements.

“I know what sports did for me when I was young,” he says as the last game of the day begins. “What those men and mentors showing up did for me, I wanted to do the same.”

Alcorn has been coaching youth sports for 25 years and he has coordinated the Mattapan Patriots for 12 years.

A cheer squad lines up at the 50-yard line, led by Ayesha James. “We love the field,” she says. “We’re out here a lot. The kids love the park. They like to come and just hang out with their friends after practices. Sometimes when we’re not practicing, they’ll still come out here. We make the most of the facilities.” 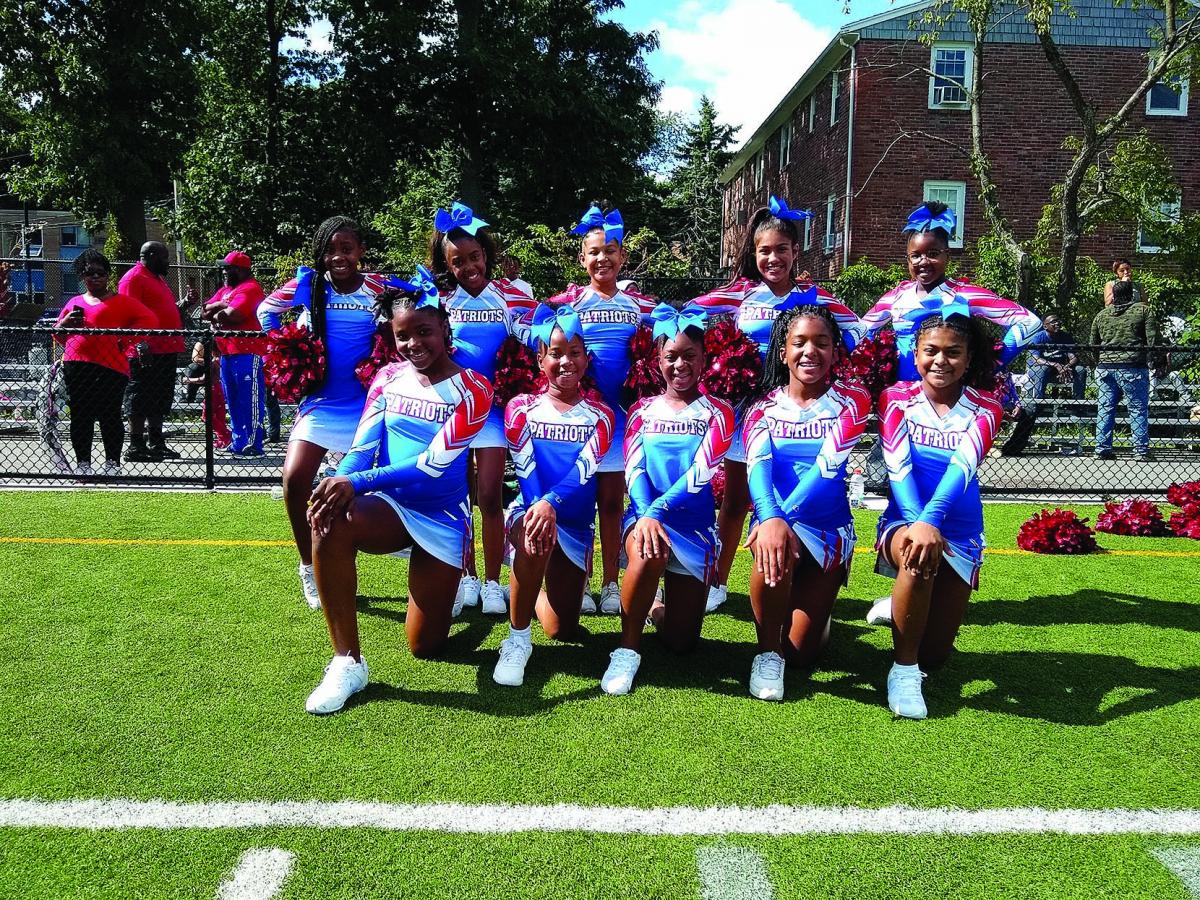 Then there are the folks who set up domino tables in one corner. They are welcome as long as they stay civil, Faulke says.

While some still smoke and drink inside the park— which is against the rules— Faulk said his focus is on prevention more than on punishment.
On this day, a small class of tennis players from the Fast Track Program is using the freshly painted tennis court to practice their forehands and backhands.

Lyanell Thomas says she rode her bike from her home in Hyde Park to participate. “I was inspired by all the people who volunteer,” she says. “The coaches who come out create a really supportive environment.”

One of the coaches collects stray balls, while another directs the class, which is organized by the Franklin Park Tennis Program, according to assistant coach Anthony Johnson. They started using Almont after the Shattuck closed due to construction.

“I love the game,” he says. “This is a group that wants to develop their tennis fast. So, we focus on their strokes and volleys.”

On the glistening astroturf on the opposite side of the park, Andre Neita and Jeffery Dubuisson lead Live Fit Army, an outdoor fitness bootcamp. Both men, buff and energetic, radiate happy endorphins. They put out ropes, tires, and a few agility ladders.

They started their program at Kelley Field, working with the kids’ football team until they heard about Almont Park through a mutual friend.

“It’s a unique experience,” says Stephanie Tomlinson, who has been going to the bootcamp for about seven months. “Not only are you really working your body out, it pushes you to the next level, but you’re here with some really great people as well. This park has become like home for me.”

Hunt Almont is designed to appeal to people in all walks of life. Young kids slide and play on a jungle gym in one fenced area. To one side of several courts, there is an open workout space with pull-up bars and an array of muscle building equipment for adults.

Three young men count each other’s pushups, leg lifts, and pull ups. “We love it for calisthenics,” one said. “It’s a really nice spot, but I like the equipment up at Franklin Park, too. What they got up there is shade. It gets a little hot out here.” 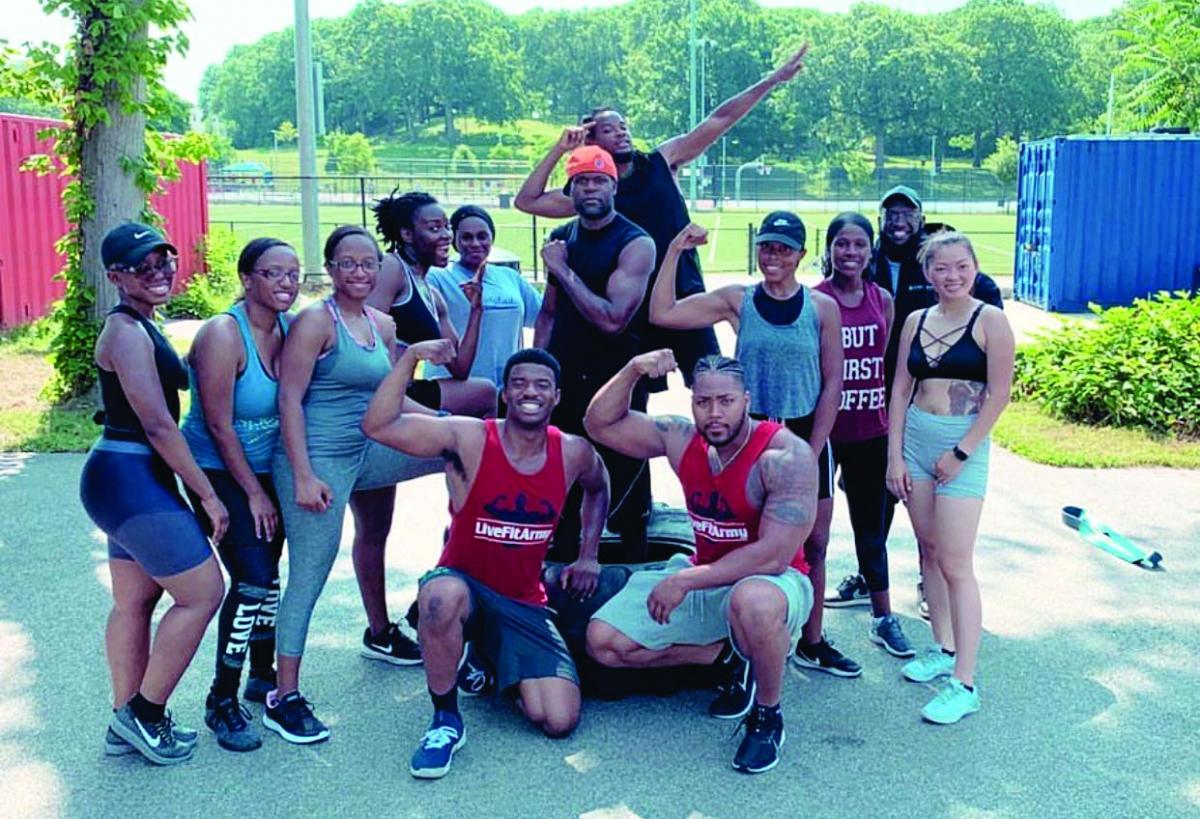 LiveFitArmy runs a fitness program at Almost Park, one of several groups that can be found using the park daily.

Further up the hill, 20-year-old Isaiah sits at a picnic table enjoying the greenery of what Faulke calls the “urban wilds.” Isaiah is a musician, guitarist, jazz enthusiast, and a graduate of the Arts Academy who writes in a notebook while listening to a hip-hop beat. He grew up in Dorchester and Mattapan.

Faulk says that “it’s a park for the public. You get the haves and the have nots. It’s quality of life that you want to give everybody. We worked hard to get it, and now I’m working really hard to maintain it.” 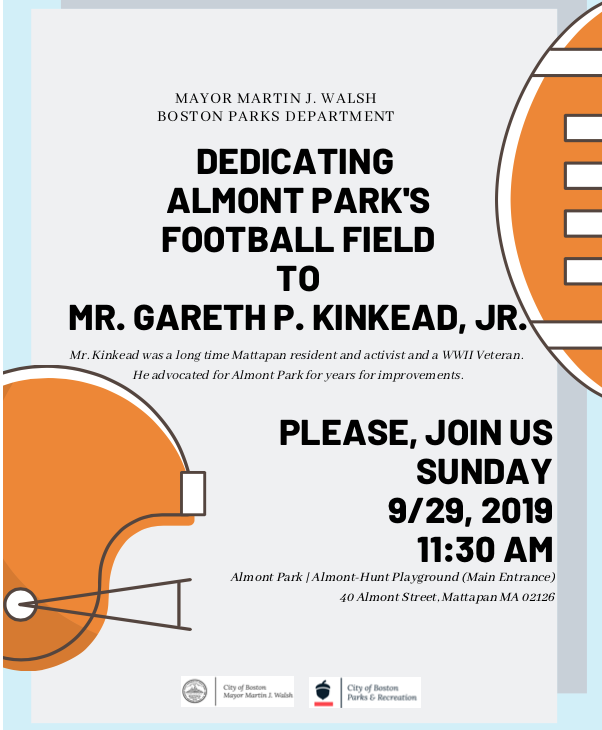 This Sunday: The football field will be dedicated to Mr. Gareth P. Kinkaid, Jr., who we lost in 2013.