At a round-table discussion hosted at her campaign office in Jamaica Plain last week, at-large city council candidate Julia Mejia sat surrounded by other candidates and community activists of color from Greater Boston. While topics ranged from campaign finance reform to displacement, time and again the conversation returned to a central question: “How do we engage black and brown and low-income communities to activate their political power?”

Mejia, a Dorchester resident who has branded herself as “the last community organizer/activist still standing” in the at-large city council race, bases much of her campaign work around that mission.

After receiving endorsements earlier this month from former rivals Priscilla Flint-Banks, William King, Domingos DaRosa, and Michel Denis (the latter two participated in the discussion), Mejia has essentially taken up the torch from her fellow candidates of color. Acknowledging the contributions of folks like DaRosa and Denis, Mejia emphasized the importance of unity around a common goal.

“This has to be beyond us,” she said. “We have to all be aligned with what the vision is collectively.”

Mejia came to the US at the age of five, the daughter of a single mother and undocumented Dominican immigrant.

“My mom came to this country on a visa, but she overstayed her welcome and so she ended up not having papers,” Mejia said. “So, at a very early age I had to learn how to navigate systems, learn how to speak English, translate for her, translate for everyone else in the neighborhood, and that’s where I got my skills [and learned] to fight. And I’ve been fighting ever since.”

Mejia’s Dorchester roots are strong: She became the first in her family to earn a diploma after graduating from Dorchester High School, she worked at a shoe store in Fields Corner as a teen, and she was crowned Little Miss Dorchester in 1989.

But she also grew up in the ‘80s at a time when the city was fraught with racial tension, a reality that shaped her outlook on matters of race and economic injustice. Mejia recalled a traumatic childhood memory: A neighbor, unprovoked, turned his dog loose on her. “It was really challenging to be an immigrant in the city of Boston, and in Dorchester in particular,” she said...“but that was what it was like back then.”

Mejia later moved to New York for a while and got a job covering the 2000 presidential election as a producer for MTV. That experience planted in her the seeds of a career in public service, she said.

“I always have known that our vote is our voice, and that work traveling around the country and seeing how people were so apathetic inspired me to continue to be engaged in not politics so much, but just in civics.”

With the goal of increasing civic engagement in mind, Mejia launched Determined Divas, an organization focused on registering low-income residents to vote and encouraging them to participate in the political process.

“I launched Determined Divas because I was tired of elected officials knocking on my door asking me for my vote and then I don’t see you anymore,” she said. “We wanted to build the infrastructure so we could host elected official dialogues post-election to keep you engaged and to create opportunities for constituents to co-design policies so that we’re not left out of the conversation. And it’s through that process that I was inspired to run.” 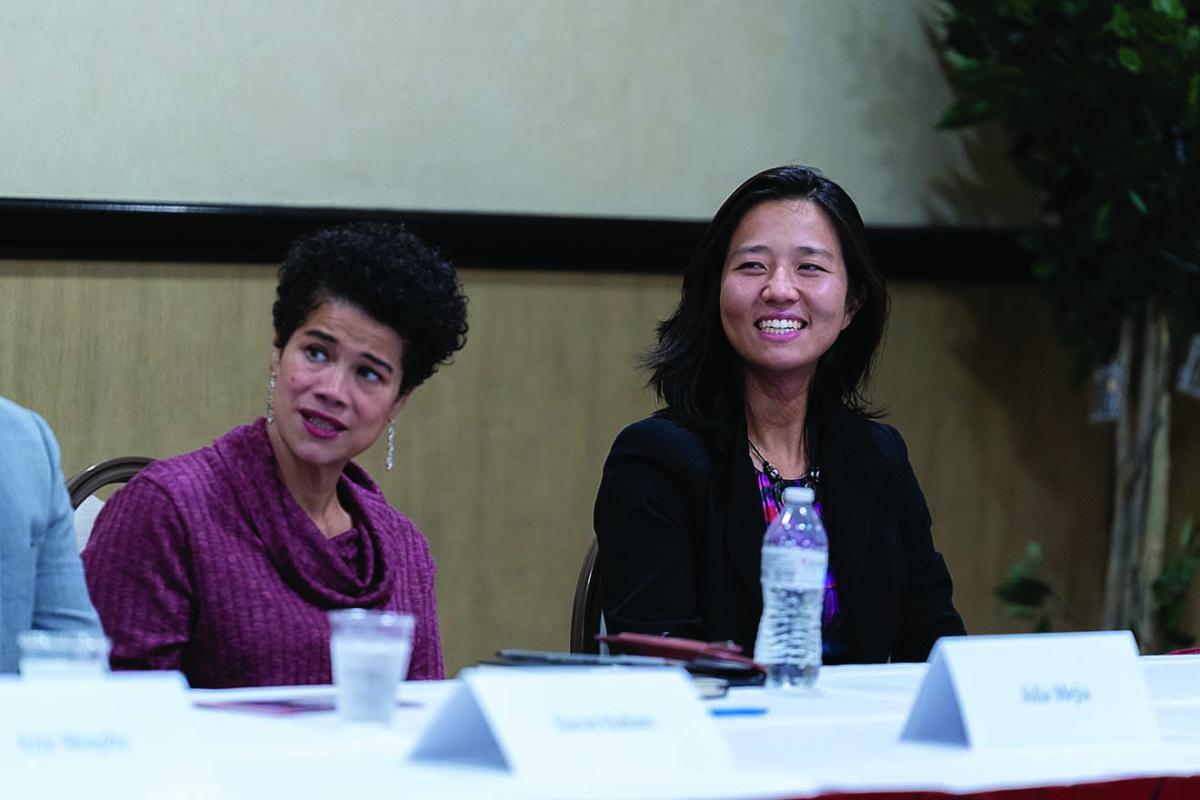 Julie Mejia, left, and City Councillor Michelle Wu were seated next to each other during a candidate’s forum at Florian Hall on Oct. 1. Yukun Zhang photo

At the discussion, Mejia laid out a few of her core policy goals, one of them the creation of a Poverty Intervention Oversight Committee on the city council that would assess just how effectively various agencies are working to narrow Boston’s socio-economic gap.

She has also set her sights on campaign finance reform, noting that too many political campaigns are based on a “pay to play” system that favors wealthy candidates and reinforces obstacles for working class candidates like herself. A first step toward a fairer system could start with taking cues from New York’s campaign finance legislation, she suggested.

“In New York there’s a matching fund program. If you raise a percentage, the city matches it. We’ve seen in New York that more low-income candidates of color are running because they have the support to do so.”

Mejia sees herself as essentially being an all the time candidate, engaging with prospective voters in laundromats, nail salons, Dunkin Donuts, Stop & Shop, even approaching cars stopped at a red light to talk. In touting her grassroots origins, she casts her opponents in the race as “political insiders” while aligning herself with everyday people.

“I believe that as the last community organizer/activist standing in the race, I have a sense of responsibility to make sure that people don’t lose faith in democracy,” she said. “We need to see ourselves reflected in positions of power. We don’t need to be super polished, or policy wonks. Our lived experience does count for something, and that matters.”

In discussing her focus on the campaign trail in the weeks leading up to next month’s election, Mejia returned once again to the theme of that morning’s discussion: activating the underrepresented voter base.

“I’m making a concerted effort in making sure that we wake up the sleeping giant, which are our marginalized communities, low-income communities, black and brown in particular,” she said. “Because I’m thinking of a long-term strategy – this is not just about my election or about me as a candidate. This about how do we build power for black and brown communities to recognize that we do matter.”