MBTA leadership is taking preliminary steps to “transform” the Mattapan High Speed Line over the next decade, with a preference toward replacing the existing fleet of 70-year-old Presidential Conference Committee (PCC) cars with a new generation trolley vehicle that is just coming into service on the Green Line.

An overview of the plan was set to be presented to the T’s Fiscal and Management Control Board today, but no official vote to authorize the move is expected until the summer after a series of public meetings in the coming weeks.

If approved, the T’s preferred plan would set in motion a modernization of the 2.6 mile-long Ashmont-Mattapan trolley line that could cost more than $200 million over a ten-year, three-phase rollout. The decision would lock in the long-term use of light-rail on the Ashmont-Mattapan extension of the Red Line and reject bus service as a substitute.

A switch to bus service on the eight-station line was roundly rejected by public comments solicited last year. It turns out that it would be more costly than keeping rail on the line, according to a recently completed audit of the line that informed today’s presentation.

The orange-colored PCC cars— built in the mid-1940s — would continue to operate on the line for the next 8-10 years, thanks to a $7.9 million refurbishment project that is now underway at one of the T’s key repair facilities in Everett.

Steve Poftak, the general manager of the MBTA, noted the magnitude of this investment into keeping the PCC fleet operational.

“We're paying $2.3 million per car for new cars on the Orange and Red line, brand new, with current safety standards, fully accessible, full technology. And we're making the commitment and we're putting a million dollars per car into these PCC cars to make sure that they stay running long enough for any type of future transition. So, it is a significant investment on the part of the MBTA.

However, the fixes to the ten-car PCC fleet is seen purely as a stopgap measure to keep the vehicles in service for the next decade and will not resolve larger safety and accessibility issues presented by the continued use of the popular but outdated cars. There are only ten PCC vehicles left in service on the Ashmont-Mattapan line and of those only four or five are operational on a daily basis. They are also unreliable in the snow, and the cost of replacing parts — which no longer exist and need to be handmade by T workers— is high. Keeping the trolleys in service permanently is “not a preferred option,” according the MBTA’s Deputy General Manager Jeff Gonneville.

“There's a lot of appreciation for having some of the historic value of the PCC cars, but more importantly having a rail system and a light rail system as... your transportation alternative. And I think there was a strong preference that that was something that I think that the residents and the customers in that area really wanted to continue to have,” Gonneville told the Reporter.

Fixing the PCC cars to stay on the line for the next decade buys the agency time to plan for the next generation vehicle, he said..

“We're at a point now where we can catch our breath to think very strategically [about] what makes the most sense for the line and then begin programming money in our next... 10 year [budget] program,” Gonneville said.

In the presentation prepared for the Control Board’s review, T managers offer six vehicle options for the future of the line— ranging from keeping the existing PCC fleet in service to buying new, modern trolley vehicles to replacing them with buses. MBTA leadership clearly favors phasing in a fleet of newly built vehicles called "type 9" cars, which are just coming into service on the Green Line this year. 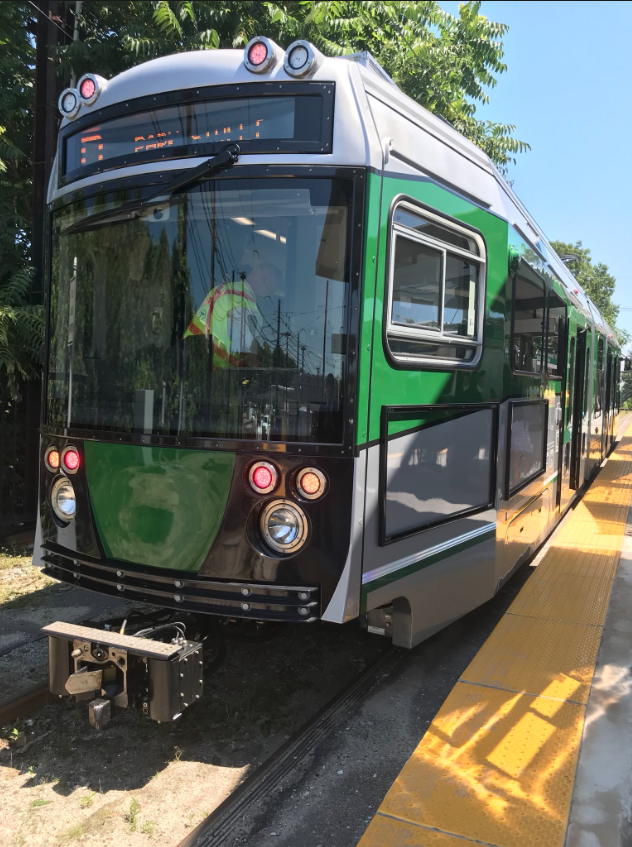 A view of a Type 9 LRT car being tested on the Green Line last year. MBTA photo

These larger capacity vehicles are brand new, ADA and safety compliant, and can run on the line with some structural enhancements to existing bridges and a new substation, which would likely to be built in an existing service yard near Ashmont.

The study— commissioned by the T in 2017— concluded that the option of replacing the existing PCC cars with electric or diesel buses is cost prohibitive compared to other options, since the right-of-way would need to be ripped up and widened to accommodate buses. That would also be a problem because bridges along the line would be too narrow for rubber-tire vehicles.

Given the cost and the disruption that would be necessary to convert the line from rail to asphalt, Jeff Gonneville, the T’s deputy general manager, said that officials would “not recommend any form of bus on the line.” The notion of extending heavier rail— the Red Line — along the corridor has also been ruled out due to cost and logistical considerations, he said.

During the Control Board meeting on Monday, MassDOT CEO Stephanie Pollack questioned parts of the report presented by MBTA Chief Engineer Erik Stoothoff. Specifically, Pollack voiced concerns about the "resiliency" of light-rail cars moving forward, due to issues with the overhead catenary wire system used to power the vehicles.

"On the bus side, we’re looking at battery electric vehicles as a way of eventually getting out of the overhead catenary on our trolley buses because, frankly, every time it’s windy, every time it’s icy, it presents operational issues," said Pollack. "I understand that the buses are not popular with the community, but battery electric buses need no overhead catenary, and that’s a resiliency issue."

Roughly 6,600 passengers ride the trolley line on weekdays, according to today’s report to the Control Board. When it’s running as normal — and not interrupted by heavy snow events— the trolley reliably zips passengers along the eight-station route from Mattapan to Ashmont in just six minutes during peak hours.

The Control Board was informed on Monday that the management envisions three phases to the “Mattapan Transformation Program.” Phase one— already underway and funded with $7.9 million— is the continuation of the PCC service for 8-10 years by making needed repairs to the existing fleet one by one. The first of eight PCC cars is currently being re-modeled at the Everett yards at a cost of about $1 million per car. The upgrades will include work on the propulsion system, the truck that serves as the foundation of the car and air systems, along with fixes to the car body and roof corrosion. All of the cars should be totally remodeled by the end of next year.

Phase two is titled “State of Good Repair and Modernization— Infrastructure investments to support future service independent of vehicle type.” This will likely include rehabilitation to the bridge the carries trolleys over Gallivan Boulevard near Ashmont and a second bridge over the Neponset River near Milton Landing and Lower Mills. There will also be track maintenance and an upgrade to power substations at either end of the line, along with new signal system at the grade crossings at Central Avenue and Capen Street in Milton. Each of the eight stations along the line would also see “upgrades to address severe deterioration” and “modular improvements to station accessibility and amenities.”

Choosing the next generation vehicle type for Ashmont-Mattapan will almost certainly prove the most controversial decision facing T management and its Control Board. The preferred choice— as indicated by Poftak and Gonneville— is the Type 9 Light Rail Vehicle, which offers advantages that the existing PCC cars could never be retrofitted to include.

These include a lower entry and exit floor, making them highly accessible and allowing for faster boarding. They are bigger and roomier and since they are brand new and backed by an existing manufacturer, easier and cheaper to fix and maintain. And, since the T will already own the Type 9 cars, they can simply be shifted over to the Ashmont-Mattapan line when newer, Type 10 vehicles are introduced into the T system later in the 2020s. 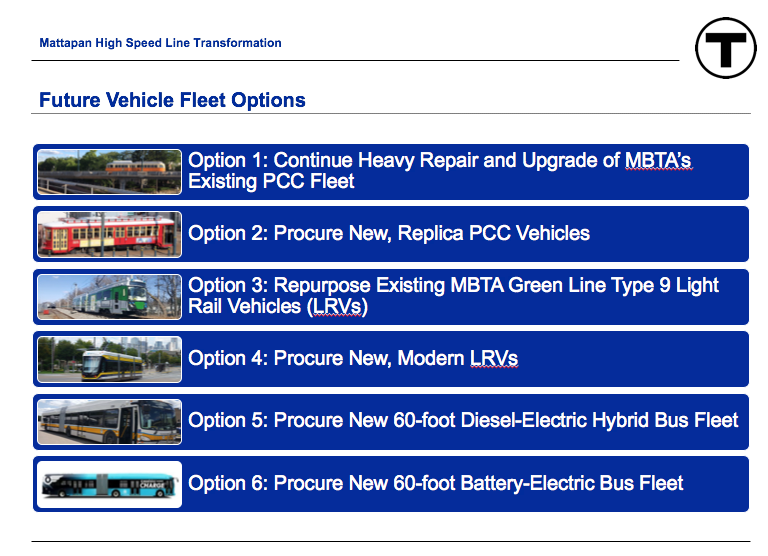 A slide from today's presentation to the MBTA's Fiscal and Management Control Board shows six options for potential vehicle use on the Mattapan-Ashmont line. MBTA officials prefer option 3, but no vote will be taken on the matter until later this year, according to the T's Deputy GM Jeff Gonneville.

Another option that the board can consider— but one that is considered less preferable by T management— is procuring all new, modern light-rail vehicles that could be custom built for the Ashmont-Mattapan line. This would be the costliest option and — because the scale of the line is relatively small in the context of the T system— the small order needed for procurement would make less sense than shifting Type 9 cars over.

The T also scoped out the idea of procuring “replica heritage” trolleys that would “retain public preferred historic look and feel, but with modernized systems.” This option will not be recommended, however, because —like the existing PCC cars— these vintage-looking trolleys are not fully accessible and would also be harder to procure.

Whatever vehicle is ultimately selected, T managers say they will definitely need to build a new facility — most likely in the service yard near Ashmont station— to service the vehicles. The existing repair shed at Mattapan Square station is regarded as grossly inadequate.

“We are very much still in the conceptual phases, but what we're thinking is [Ashmont is] where we would build this small facility,” said Gonneville.

Rep. Dan Cullinane, who has been a leading political voice in support of light rail on the Mattapan-Ashmont route, said he was encouraged by the MBTA’s current thinking on the line’s future. He pointed to a petition signed by more than 2,000 residents in favor of preserving the trolley system, as well as a 2016 letter he wrote to the MBTA board that was signed by ten local elected officials and objected strongly to a potential shuttle bus replacement service.

"If you look back, the language in 2016 wasn’t about preserving these specific vehicles--the line first and foremost has to work." he said. "I think the community has unequivocally said we want to keep trolley vehicles, and now the MBTA’s own report shows buses would be much more cost prohibitive," he added.