MBTA workers on damaged track at JFK/UMass on Friday afternoon.

MBTA General Manager Steve Poftak said Friday afternoon he hopes the T can restore "single seat" service to and from Braintree on the Red Line by Monday, but that a final decision will be made late Sunday afternoon, after a series of test runs by trains over the track that was damaged - along with the third rail and switch - by a train that derailed on Tuesday.

But even if Braintree riders will no longer have to change trains at JFK/UMass, that doesn't necessarily mean the restoration of full service, because the train "almost entirely wiped out" one of three "bungalows" that control switches at the station and heavily damaged the other two, Poftak said at a press conference yards from where workers were busy working on the switch and removing electronics from one of the bungalows.

Poftak said inspectors have ruled out foul play and operator error as possible causes of the derailment, but that they have yet to figure out whether something went wrong on the car that went off the rails or on the tracks or switch.

Poftak said the switching equipment had been slated to be replaced as part of a $113-million overhaul of Red Line signaling equipment - but not quite as quickly as the T now has to work to restore the equipment, he said. Until it can be restored or replaced, the Red Line through JFK/UMass will be controlled by manual signals, which can add 15 to 20 minutes to a commute.

The general manager, who frequently rides his own trains, tried to reassure riders - after a week that saw derailments on both the Red and Green Lines that "the system is safe." He said that although the car that went off the rails was originally built in 1969, it received a major overhaul in the late 1980s and brand new "trucks" - the wheels and components that connect them to the car - in 2014. He said the car, like all others, is inspected after every 8,500 miles of service, or roughly once a month, and said it passed its last inspection on May 3.

Poftak started the press conference by acknowledging the derailment and the problems it has caused riders since is "unacceptable" and he apologized to riders for what they've been through this week.

He said a total of 150 MBTA workers and contractors have been working 24 hours a day since the derailment to fix things. He acknowledged he'd like to see service restored faster, but not at the expense of safety. 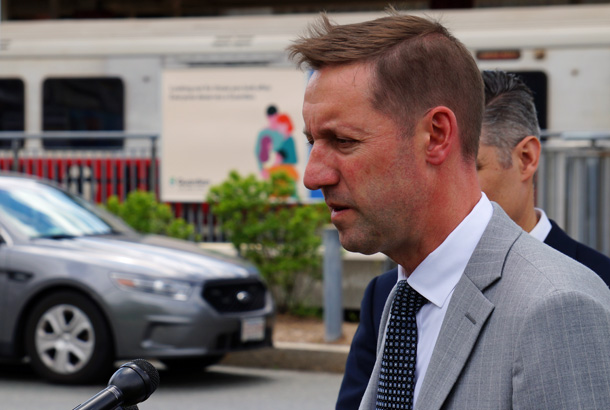