Lou Pasquale (center in brimmed hat) and his wife Terry were joined by Mayor Martin Walsh and other officials and friends during a surprise ceremony to dedicate a square in front of Boston Bowl in his name. Daniel Sheehan photo

At the age of 18, as Lou Pasquale lay in a field on Okinawa with a piece of shrapnel in his leg, he saw a heavenly white light — and made a pact with God.

“I said, ‘I promise to help an individual every day of my life. I told my Mum I’d make it home, and so if you help me through this, I’ll keep that promise.’”

After returning home to his native Quincy from World War II, Pasquale has spent the last 75 years keeping that pledge. He ran a masonry company for a brief time before being hired by the owning family in 1956 to build Phillips Candy House on Morrissey Boulevard. It was an opportunity, he said, that would give him a way to “meet a lot of people that I could help.”

He went on to help build several establishments for the family, including Boston Bowl next door, where he served as manager of the bowling alley for decades and become known for taking local disadvantaged and troubled teenagers under his wing.

On Sunday morning, Pasquale, 93, was honored with a surprise ceremony attended by Mayor Martin Walsh, a host of elected officials, and nearly 100 friends and family members at which the city officially christened the intersection of Tenean and Freeport street outside Boston Bowl as “Lou Pasquale Square.”

The honoree was overcome with emotion. He embraced loved ones and listened as applause and chants of “Lo-uie” rang out in the square.

Pasquale’s moral compass steered him true from a young age, even before his deal with God. After learning about the atrocities being committed by Hitler and the Nazis as a teenager, he says, he was compelled to enlist in order to protect his three Jewish friends who lived down the block. 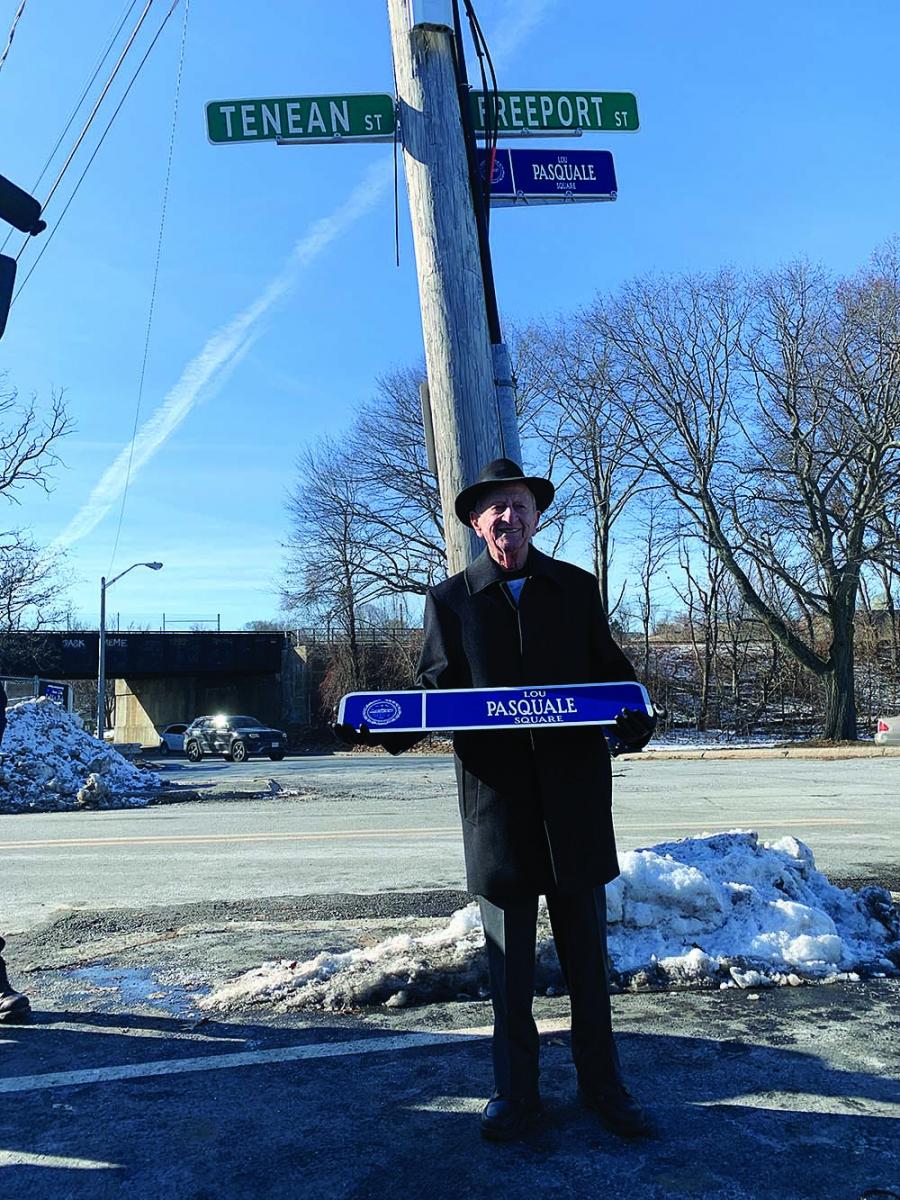 Calling Pasquale “a true American hero,” Walsh spoke to the veteran’s impact on countless Dorchester residents, including himself as a regular patron of Boston Bowl while growing up.

“When I started to get involved with politics many years ago, Lou was always opening doors, making relationships, helping organizations,” said the mayor. “Every organization that needed help, whether it was Work, Inc. when they came over the bridge from Quincy to Dorchester, or Friends for Children, or the Dorchester YMCA, the Boys and Girls Clubs, the senior luncheons, the Dorchester Day Parade Committee — all the different organizations in this city went to Lou Pasquale.”

Pasquale gives himself the credit for convincing Walsh and others that they should run for office, in addition to the scores of teens he mentored who went on to become firefighters, police officers, and judges – kids who otherwise “could have gone down another road,” he said.

But for all his acts of kindness and guidance, Pasquale expected nothing in return.

Several attendees at Sunday’s celebration remarked that they rarely saw Lou Pasquale speechless. But seeing his name revealed on the sign outside Boston Bowl was overwhelming, said the honoree. “This is beyond anything in my dreams.”