Chesterfield Coppin, owner of Oasis Restaurant: "I'm changing the whole dynamics of what was here before." Dan Sheehan photo

A new restaurant is in the works for 33 Hancock St., the troubled property that has been a source of controversy in the Uphams Corner neighborhood over the last decade. The site, which in the past has housed establishments like Hancock Cafe, the Rendezvous Lounge, and Ka-Carlos, was the scene of a double homicide that shuttered the spot in 2009.

But a new restaurant set to open there this month—aptly named Oasis —is aiming to replace that legacy of violence with one of peace and community involvement.

Chesterfield Coppin is the owner of Oasis, which is scheduled for a soft opening on Sept. 17. He is part of the group that owns the successful Oasis Vegan Veggie Parlor in Four Corners, but he told the Reporter that the menu at the new eatery will look quite different from that of its plant-based predecessor.

“This is definitely not vegan,” he said with a chuckle, explaining that the restaurant will serve a mix of cultural cuisines that includes dishes from his native Barbados, Caribbean and Cape Verdean fare, and African-American soul food. While vegan options will be available, signature dishes such as a surf-and-turf special with ribs and cajun shrimp and “rasta pasta,” a creamy noodle dish with seasoning and protein, will lend a decisively “comfort food” feel to the kitchen’s offerings.

“This is a collaboration of multiple cultures,” he said. “One of the things that I realized is this community needs a little more attention and a little more love. We want to portray that in the food we are going to serve.”

Heading into this venture, Coppin has an acute awareness of the diversity of Uphams Corner and the various ethnicities represented in the neighborhood. A resident of Brockton, he spent over a decade as bank manager at Citizens Bank in South Bay Center. That experience, he said, gave him insight into the importance of customer service and establishing relationships with community members – two tenets that will serve as the cornerstone of his new business.

He also knows that representation is important – “customers want to see people that look like them,” he noted. As a result, his newly hired staff includes workers of Vietnamese, Cape Verdean, African-American, Irish, Dominican, and Bajan (Bardadian) descent.

“There’s a whole dynamic of people here that we need to blend,” he said. “Obviously, you may know that this place has history, and it’s not the most pleasant history, so we want to change that. Food tends to do that – good food with a good environment and a peaceful culture. So that’s what we’re hoping to develop here.” 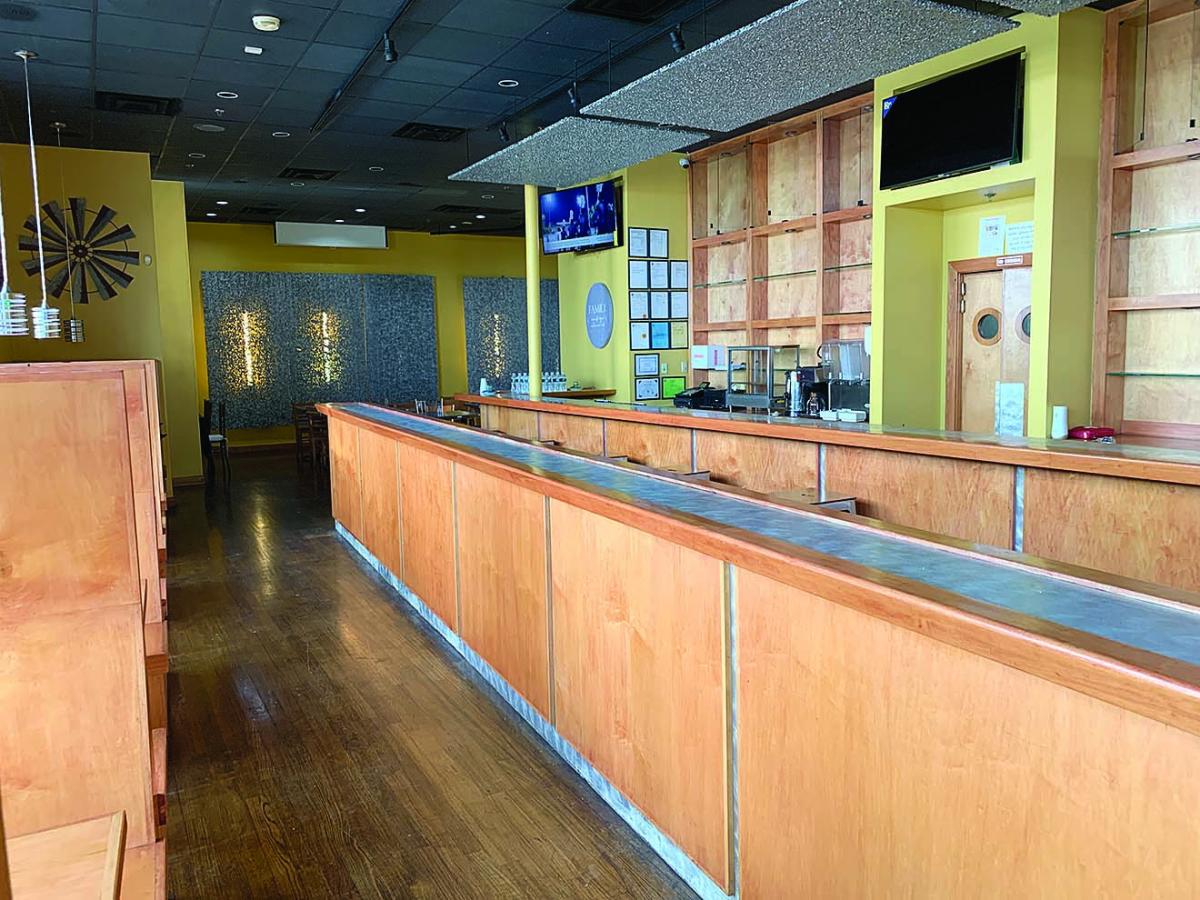 The interior of the new Oasis restaurant in Uphams Corner. Dan Sheehan photo

Down the line, Coppin hopes to begin hosting “theme nights” at the restaurant, featuring live spoken word, poetry nights, and a culinary kitchen program to teach local youth about nutrition and food preparation. A community garden located behind the restaurant may eventually be a place to cultivate herbs and vegetables.

Alcohol and loud music were two main ingredients for trouble at previous establishments at 33 Hancock, where fights would often arise due to patrons “drinking and acting a fool,” as Coppin put it. Signage on the storefront to Oasis reads “Food. Music. Drinks.”

But the latter two will likely come some months from now as Coppin adopts a “food first” approach and tests the waters of a community traumatized by the violence that often spilled out of the property. Coppin says he gets questions about Oasis’s liquor license from nearly everyone he meets.

As of now, he has yet to apply for one.

“Right now, I’ll be honest with you: All I care about is getting the restaurant open to feed people,” he said. “In terms of music and drinks, that will be something that comes down the road. I don’t want that to be the core focus...people are constantly asking me, are you going to serve drinks? We will eventually, but I want people to come and taste the food.”

The relationship between ownership of the property at 33 Hancock and surrounding neighbors has historically been characterized by tension. As such, Coppin is putting transparency – both literal and figurative – at the forefront of his operation. He has worked closely with Uphams Corner Main Streets to establish a dialogue with neighbors and community leaders. Some folks are suspicious, which Coppin understands. But he says most are on board with the new direction he’s taking.

“I’m changing the whole dynamics of what was here before. I mean, before they had tinted windows, like they were hiding stuff. What were they hiding? I don’t have nothing to hide. I’ll show you everything, you know? We’re a real open book here.”

And if Oasis sees success through this formula of openness and community involvement, Coppin thinks it could inspire others to open value-based establishments of their own.

“I think that it could be the platform for other minority-owned businesses that have fine dining or sit-down to be able to rebuild some kind of trust within the community.”